Is it Unethical to Use Sarcasm?

I am trying to find an ideal example of when it is best to use Sarcasm. It seems that sarcasm in general is a rude, and disrespectful approach to talk to someone. I can see how it may be used to prove a point, but it also seems to me that there may be better ways.

The question of sarcasm is a complex one for which I think it's justified to give a quick definition, so as to help in this debate.

Sarcasm, of the ancient greek σαρκασμός / sarkasmos; designates an ironic mockery, a jest that puts its target in derision. It is biting, even bitter and hurtful. It can be considered as a form of "spicy" irony, which consists of saying the opposite of what we think, while making it understood that we are doing so. Sarcasm is harder to detect than irony. In effect, being sarcastic is saying the opposite of what one thinks, without showing it, hence being deceitful.

Now, I would like to address that the view of sarcasm as being rude is, to me, cultural. In the U.S, it is widely considered extremely rude to be sarcastic in dialogue with another, whereas in Europe, France most exceptionally, sarcasm is regarded as being witty.

Your question is linked to ethics though, which is an "applied"(if i may) field of philosophy. Ethic is situated in correlation with the ethical triangle (I want, I can, I must), with ethics, ideas aren't black or white, they are applied to corresponding situations, ethics are linked to reality.

I would say that sarcasm can be quite ethical to use in the case that you are familiar with its target and he is familiar with you. Sarcasm is used at a target for a goal, the important ethical dilemna lies here: "I want to use this bellicose strategy to get my point across with that particular target, should I? Must I use it to get the effect I want or can I go another way?"

Should the target be novice, or amateur, and you use sarcasm to show the weakness of that target's question, or answer, than you need to know that targetting the person's intellect will be beneficial to the overall argument. Inherent with sarcasm is the idea of deceit.

Moreover, on the cultural approach and on your ideal example, this WW2 poster is a good example of using sarcasm in an ethical way, even though I'm not certain that war propaganda is very ethical, it's seems to me that it is in time of war as it fits in the ethical triangle from the states' point of view. 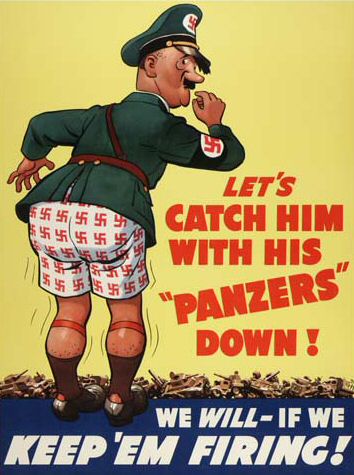 Sarcasm derives from sarcos implying to "cut flesh," but was used by the ancients already to mean a "cutting" or "biting" remark.

It is related to irony and satire, both of which enable us to regard things from "two standpoints," destabilizing the uniform certainties of dogma. For Rorty, "irony" is a hallmark modern liberalism, in the best sense. The capacity to "see the other side" of an issue and to refrain from excessive self-certainty and unilateral judgments.

Some of this ethical value may be found even in the mocking or "biting" form of sarcasm. For the ancient Greeks, sarcasm was characteristic of the Cynics, the most famous of whom was Diogenes, the wandering seeker of an "honest man." The Cynics, which means "doglike," strove to live in conformity with nature and reason, not to be swayed by customs, norms, rules, money, ambition, and the pretensions of urban culture, which they publicly flouted and confronted "like dogs."

Their sarcasm was thus a corrective to the illusions and hubris of their fellow citizens, an exaggerated form of rebuke they inherited from Socratic nonconformity and deflationary questioning. There was more than hint of sarcasm in Socrates himself and even, at times, in Jesus. As Diogenes remarked: "A dog bites his enemies. I bite my friends to save them."

So there may be purposeful, even ethical mockery that takes the form of sarcasm as differentiated from insult and humiliation. The application depends on the power structure in which it is applied. As we say, a haughty rich man slipping on the banana peal is funny, a poor old man slipping on the same banana peal isn't. Proper applications of sarcasm should discomfort the overly comfortable.

With the important caveat that sarcasm can all too easily become a callow and unattractive habit, as well as a dangerous recourse of the political demagogue.

Not the answer you're looking for? Browse other questions tagged ethics argumentation rhetoric or ask your own question.

5
Is it ever appropriate or reasonable to use pejorative expletives in public discussion?
5
Mill's proof of utilitarianism: moving from the individual to the aggregate
6
How to determine when it is ethical to use imperfect driverless cars?
5
What is the proper response in a debate when your opponent ignores your counterarguments?
6
Hume's argument for the subjectivity of morality
4
Presenting an example, then claiming the other person needs more information before using the same example - is either of us making a fallacy?
1
What is an objective and academic (philosophical) breakdown of the ethics behind this approach to reducing racial inequality?