How can being able to conceive of something "perfect" imply its existence?

In this question and reading about the ontological argument elsewhere I have discovered that there is (and has been) a lot of discussion about it, and that it was taken very seriously.

Can someone explain to me how thinking about something perfect (or being able to conceive it) must mean that it exists?

(This is obviously a non sequitur in my opinion, even if existence is a perfection; why should me thinking about something perfect make that thing exist? But, if that were the case, I expect the argument to never be taken seriously in the first place.)

How can this argument that "thinking about a perfect being means that it has to exist" have been taken so seriously for so many years (instead of being dismissed right away)?

Richard Dawkins, in his book The God Delusion, articulates an "infantile version" of the ontological argument in a way that might reveal it's reasoning and major flaw: 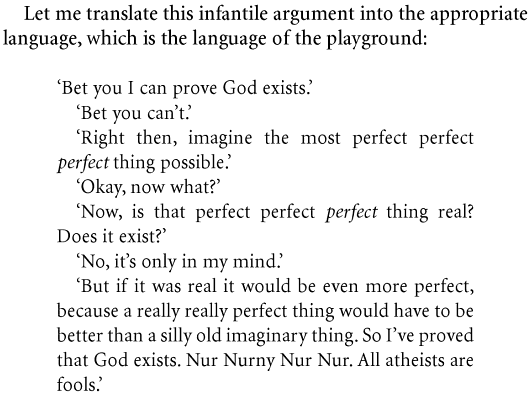 Now, consider the classic formulation of the ontological argument...

... which more clearly highlights the critical (3rd) premise, which is often tacitly implied in many formulations.

This argument is often discussed in entry-level studies in philosophy because it is both very old and specious in nature. It is a valid argument, but it is not sound because not all the premises are true. In fact, all the major criticisms boil down to the same thing: the 3rd premise.

The other major line of criticisms is the empiricist argument, often attributed to Hume and echoed by many philosophers today. These people balk at the idea that such grand conclusions can be reached with absolutely certainty without any empirical evidence. Richard Dawkin's calls it "logomachist trickery", and points out the counter-argument by Douglas Gasking which "proves" the non-existence of God using the same basic reasoning:

SEP and Wikipedia cover this pretty well; there should be more than enough there to help clarify the "power" of the ontological argument for you, but keep in mind that once you realize the trick (which you already seem to have done), the argument really loses all its persuasiveness.

Before answering the question, we should clear up the terminology a bit. The validity of an argument refers to its logical structure; the soundness depends on the truth-value of its propositions.

So, it would seem that you are not asking about the soundness at all (since you are willing to stipulate that the premises are sound, for the sake of argument) but as to its validity.

As you may suspect, the ontological argument rests upon an often unstated premise: that to exist is more perfect/greater than not to exist.

If this premise is granted, the argument is valid.

If we begin with the notion of some X such that X is "that than which a greater cannot be thought", and draw in our premise from above, X must exist, because otherwise we could simply think of something that shares all of the properties of X plus existence.

Note that this doesn't actually get us very far; so far all we've proven is that X is the greatest thing imaginable-- Anselm still has the work of attributing to this X all of the other properties he wishes to attribute to God.

And, of course, it rests on a series of shaky premises.

The SEP article on the subject is a great starting point, and offers several different attempts at formalization of Anselm's argument.

It's a rather trivial declaration. It's saying that if God were a most perfect being, He should also exist, since how can God be perfect if He doesn't exist?

From a logical standpoint, it's a bit like pointing at a rock and claiming it to have the magical properties of dispelling any evil monsters. When questioned about it's effectiveness, you can always say that since there are no evil monsters, it has proven its worth. Both arguments hinge on the existence (or in this case non-existence) to prove something. Of course, that's a fallacy.

Here's an ontological disproof of God:

God is a being capable of the greatest achievements imaginable.

The greatest handicap imaginable is not existing.

Therefore God must not exist. If he did exist, a non-existent God would be capable of even greater achievements than he is, which is a contradiction.

28
Where is the weakness in the ontological proof for God's existence?
6
Is perfection conceivable?

2
Underlying logical structure behind Descartes' Ontological argument?
8
St. Thomas Aquinas' Contingency Proof for the Existence of God
5
What do philosophers mean by 'conceivable'?
28
Why does Dawkins think it is wrong to posit that a paragon of 100% morals could theoretically exist?
2
Has anyone ever argued that the laws of Nature and physics are necessary truths?
2
Would the ontological argument disprove the Christian god?
5
Why can there only be one necessary being, as opposed to two or thirty seven?
0
Existence being analytic of God vs. God being analytic of existence