(For instance, as a first-order approximation, mathematics can be sub-divided into three main categories at the first level: Analysis, Algebra, and Geometry.)

What are the first few books that every person attempting to "learn" these areas of philosophy at an undergraduate level read?

The traditional branches of philosophy generally include

We can go ahead and add a few contemporary branches on to this (more examples could certainly be adduced):

In addition, we could add many schools and movements (again, more examples could certainly be added). From the 20th century alone, there is:

Finally, we can also consider the history of philosophy itself as constituting a series of fruitful conjunctions of cultures and eras where ideas were changing. The structure here is taken from Wikipedia's article on the History of Philosophy:

I believe that following list will cover the main areas of Philosophy:

Metaphysics (Study of Existence - What's out there?)

Epistemology (Study of Knowledge - How do I know about it?)

Ethics (Study of Action - What should I do?)

Politics (Study of Force - What actions are permissible?)

Aesthetics (Study of Art - What can life be like?)

Apparently there is a philosophy of logic and philosophical logic which do differ.

Philosophy of logic is the arena of philosophy devoted to examining the scope and nature of logic.

Philosophy of logic is the investigation, critical analysis and intellectual reflection on issues arising in logic. The field is considered to be distinct from philosophical logic.

Philosophical logic is the branch of logic concerning aspects other than or outside of formal logic.

Philosophy of Computer Science - is concerned with philosophical issues that arise from reflection upon the nature and practice of the academic discipline of computer science.

Philosophy of science - is concerned with the assumptions, foundations, methods and implications of science.

Nigel Warbuton (Open University lecturer of Philosophy)'s books cover the basics very well. Philosophy the Basics is the best one to cover the main areas, the books is broken down into:

The way I would characterize the branches at the top level is:

This list has a good deal of overlap, too. Metaethics arguably straddles all of the first 3; philosophy of mind overlaps with at least metaphysics, etc.

Philosophy of language seems an odd man out, but given its importance in analytic philosophy and that it cannot be comfortably subsumed under any other branch on my list, I'm stuck with the oddity.

The following chart (that I edited for amelioration) depicts, includes, and better organises many more subfields of philosophy than all of the other answers in this thread.

Source: Inside of the Back Cover, Introducing Philosophy for Canadians: A Text with Integrated Readings (2011 1 ed). 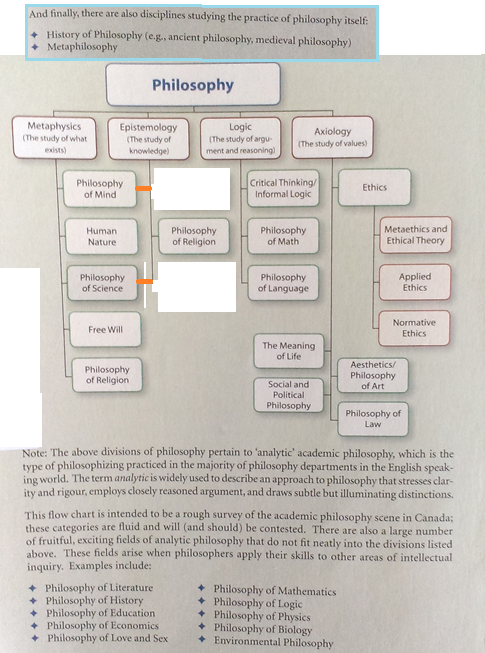 being a student of this subject,i think that philosophy can be divided in major three catagories

10
What hierarchies exist in different branches of Philosophy?
1
What textbooks should I read after reading many short introductions?
0
Which branches of philosophy matter most to law?

35
What are some good introductions to philosophy?
15
What is the modern view of the validity of Nietzsche's On the Genealogy of Morals?
3
Introduction Modal Logic with emphasis on metaphysics - free will particularly - and also mathematical logic
9
Introductory book on philosophy of logic?
2
How to start Philosophy and find the branches that are related to my questions?
1
Should I study philosophy of science directly, or after understanding other branches of philosophy?
4
Why is a well-understood theory easier to understand, and does this answer the question "Why is older philosophy 'easier' to understand"?