How do quantum-mechanical worlds relate to possible worlds?

I am not really familiar with the metaphysics of the "worlds" from the Many Worlds Interpretation of QM. How do these worlds relate to possible worlds in the Lewisian sense?

Lewis wrote a short piece (I believe his last published piece?) on MWI, "How Many Lives Has Schrödinger's Cat?", but he doesn't really say anything about the metaphysics of the QM worlds and seems to shy away from calling them worlds.

The SEP article on MWI says some things which suggest that the QM worlds are centered worlds, or what are sometimes called epistemic worlds. But that begs the question of which centered worlds? Presumably not all of them, since the worlds compatible with the experience of a hallucinating madman who experiences a world inconsistent with QM are presumably not among the QM worlds.

So, how do QM worlds relate to possible worlds?

Christopher Norris, in his book Quantum Theory and the Flight from Realism, draws some parallels between the 'many worlds' QM theory as presented by David Deutsch, and the possible worlds theory of David Lewis:

Lewis himself arrives at this conclusion by way of the modal logic and the argument that necessary truths are those that hold across all possible worlds rather than obtaining only in a certain limited subset of worlds which happen to resemble our own in respect of various contingent features... In this form the theory goes back to Leibniz and involves the essentially rationalist belief that thinking can indeed deliver such real-world applicable truths through a priori reflection...

My point is that Deutsch's argument in support of the many-world hypothesis shares certain features of Leibniz's doctrine of logical necessity and also with the recent revival of that doctrine by metaphysically minded modal logicians such as Lewis. That is to say, it works on the strong rationalist principle that one can derive certain necessary truths about the quantum 'multiverse'-truths that hold good across all possible worlds or universes-by a process of purely deductive reasoning from self-evident premises. (p. 107-108)

The key difference in the eyes of Deutsch between himself and philosophers from Leibniz to Lewis is that he claims to derive his theory from the a posteriori evidence of Quantum Mechanics. Norris argues (convincingly in my view) that nevertheless, Deutsch does rely on a priori arguments and hence his theory has an essentially metaphysical component.

So it comes down to the question of how we distinguish conceptual from evidential arguments that determines whether the multiverse belongs to science or metaphysics/philosophy.

You may find it interesting that Tegmark's Level III multiverse is the one implied by Everett/MWI, whereas his Level IV multiverse comes closer to Lewis' modal realism, although it is limited to all mathematical structures (and therefore does not include all imaginable universes).

So, from this perspective, MWI's and Lewis' are distinct ideas of worlds. (Even more so than Levels III and IV are.)

See Our Mathematical Universe: My Quest for the Ultimate Nature of Reality, p. 350 (or search inside for "Lewis"). 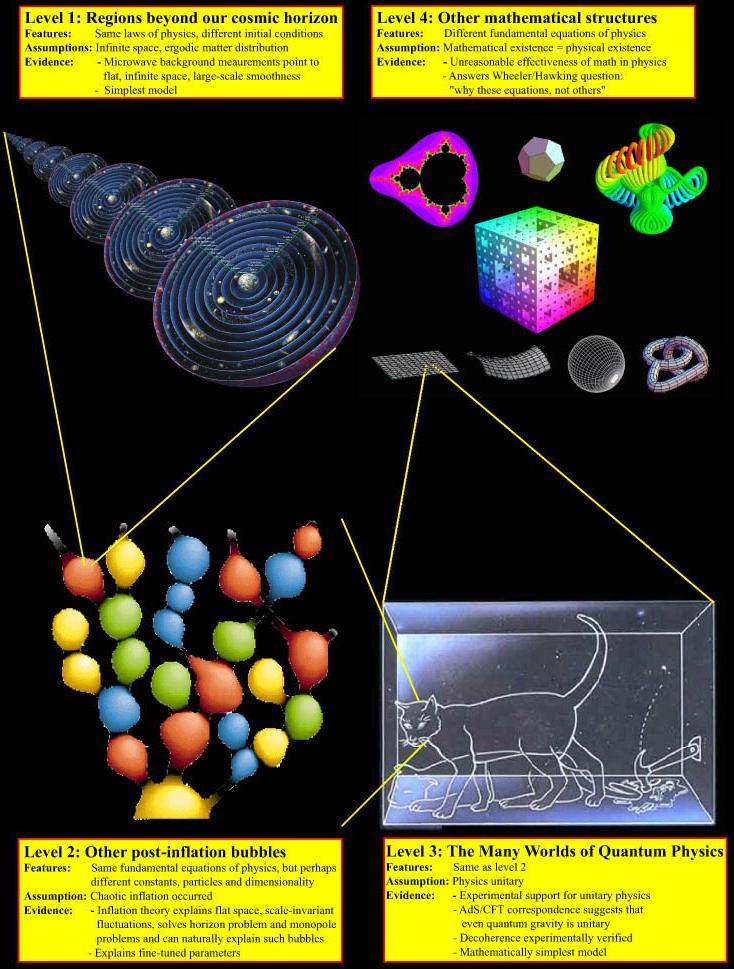 The quantum mechanical worlds obey some restrictions, as you have noted. Universes are structures within the multiverse within which information can flow:

The quantities that carry information that can be copied are described by Heisenberg picture observables: Hermitian operators. No quantity that is described by something other than such an observable can be realised in any quantum mechanical world:

It's important to note that David Lewis doesn't have a monopoly on the use of the term possible world and I think some of the answers above are confusing modal logic itself with some much more controversial metaphysical views.

Now, Lewis's modal realism involves the claim that each of the possible worlds (not just the actual world) has some universe that makes it true. These other universes are supposed to be the concrete things. Lewis has interesting metaphysical argument for why this must be the case, but it is clear that this is a strictly metaphysical argument. The claim doesn't follow from the semantics of modal logic itself.

Now Lewis might be right about modal realism or he might be wrong. Perhaps it is the case that possible worlds interpretations of QM give some evidence in favor of Lewis's modal realism or it might not. But it is very important to note that what possible worlds are supposed to be in this interpretation of QM are what we were calling above "other universes", that is, they are concrete objects, not just abstract sets of assignments of truth values. I don't have the expertise to weigh in on the evidence for or against this view of QM: I just want to make clear exactly what role such evidence would play in the philosophical dispute at issue here.

If the possible world in a philosophical sense can be constituted out of particles of matter and exchanges of energy, it is almost assuredly one of the multiple worlds of Quantum Mechanics.

When you do the prediction integration over all possible Quantum worlds it is (theoretically) over every possible configuration of particles the universe could be in. Since the possibility curve for every particle extends through all of space, and the movement of particles could conceivably reshape space in pretty much any geometry humans have described, most alternative versions of the material world qualify. Given string theory and M-theory so do worlds with different physical constants, arbitrary numbers of dimensions and different characteristic particles. They may be incredibly unlikely, but none are ruled out. The computations are going to write them off, but they are in the range officially considered.

Of course, in reality, such a computation is always staged over a very small area and a very short time limit with very few outside influences (like Feynman's examples), or is estimated over a huge area and time where a lot of other factors are assumed to cancel one another out (like Hawking's explanation of the lifespan of black holes), because anything else is pretty much beyond human scope. And very few people consider realms where the physical constants would be different, unless they are concerned about an entire abstract universe with almost no detail (like the stuff Green discusses at the end of 'The Elegant Universe').

But theoretically, there is a huge overlap.

Not the answer you're looking for? Browse other questions tagged metaphysics philosophy-of-science philosophy-of-physics or ask your own question.