thing and its properties [closed]

Aristotle says there are things and two types of properties that thing can have,one accidental property other essential property.

my question is if we remove all accidental and essential properties of a thing will that thing still be same thing???

and why Aristotle made a distinction between a thing and its properties? because to invent categorical logic???

if i remove all accidental properties to a gold ring ,like polish or attached gems on gold ring then i will left essential properties of gold namely yellowish color and metal related stuff like chemical composition of metal gold.

i think it is wrong to say there is a "thing" and then we attach essential and accidental properties to that thing,i think when we talk about a thing we are talking about its essential properties,so making distinction between a thing and its properties is wrong,am i wrong or right?

Let's say here, the res essentia, the essence or conceptual reality, is that of a 'gold ring'. That it is 'gold' and 'a ring' are its real predicates and these cannot be changed without altering its essence. If you do remove 'gold' you are simply left with 'ring', and if you remove 'gold' and 'ring' you are left with nothing.

An example of accidens would be if someone were to make the gold ring. This predicate could be removed, so to speak, by not making the ring. The essence of the ring would be unaltered. Another accidens could be for the produced ring to be lost. This predicate could be removed by finding the ring. Again, the essential concept, "gold ring", is unaltered throughout.

The problem of the relationship between essence and existence is resolved in the Thomistic school by saying that in an actual being the what of this being is a second res, something else for itself as over against the actuality; thus, in an actual being we have the combination or composition, compositio, of two realities, essentia and existentia. Therefore, the difference between essence and existence is a distinctio realis. Cum omne quod est praeter essentiam rei, dicatur accidens; esse quod pertinet ad quaestionem an est, est accidens; since everything that [in the Kantian sense] is not a real predicate in a being is spoken of as something that befalls or is added to the being [accidens], to the what, therefore the actuality, or existence, that relates to the question whether a res with the totality of its realities exists, is an accidens. Actuality is something accessory to the what of a being. Accidens dicitur large omne quod non est pars essentiae; et sic est esse [that is, existere] in rebus creatis; existence is not part of the reality but is added on to it. Quidquid est in aliquo, quod est praeter essentiam ejus, oportet esse causatum; everything that is outside the thing-content of a thing, everything that is not a real predicate of a res, must be caused, and indeed vel a principiis essentia . . . vel ab aliquo exteriori, either by reason of the essence itself or by another.

source :- The distinction between essentia and existentia in Scholasticism 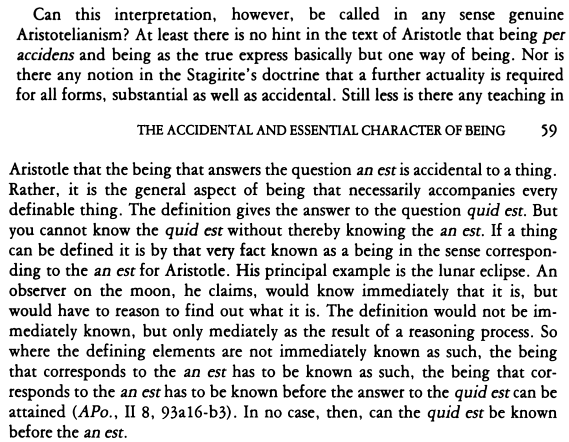 It doesn't seem so; in fact it doesn't result in a bare 'object' but a contradiction; This is why they're called essential properties.

So gold on a ring is an accidental property.

So shape is accidental to what gold is

First, I think Mozibur is on the right track here, but I'm a little hesitant to work with the example as supplied ("a gold ring"). Second, I'm going to use the word "substance" instead of thing to be consistent with Aristotle and the context where he speaks of essential and accidental properties.

Essential properties are those properties that follow necessarily for substances (formed matter) to be and have the form it is. Accidental properties are those things that are incidentally true. For example, long hair is an accidental property vis-a-vis the human essence. You can take it away and what remains is human. Being alive on the other hand is an essential property of the human essence. If you take it away, what remains is no longer human. So far, I think Mozibur and I are in full agreement.

Where I hesitate and this relates specifically to the example is that a gold ring is an artifact. And artifacts are difficult on the Aristotelian model. They don't necessarily have forms in the same way that (see the top of here: http://plato.stanford.edu/entries/artifact/). Thus, at least for Aristotle, it's not clear that artifacts have essential properties. But if they do, then I think it's precisely those properties necessary for it to be what it is. So a gold ring would a gold ring insofar as it is gold and a ring. Specific ornamentation would be accidental.

I'm a little confused by your suggestion regarding taking away gold's yellowness and specific weight. Gold is a natural kind regardless of how it is shaped. If you take away the gold, you take away the thing and are left with nothing.... The yellowish color is what gold is or rather is an essential property of being gold (with two caveats: (1) modern inventions like "rose gold" and "white gold" are actually alloys -- the gold part is still yellowy and (2) Aristotle's theory is not ideally suited to molecular-level chemistry).

A gold ring on the other hand is an artifactual arrangement of gold. So you can change the shape without changing the gold essence.

But essential properties can still be different than the substance itself. Silver, Platinum, and Palladium can all be said to be similar colors, and their precise colors are essential to them as are their softnesses, etc., but that doesn't make the color a softness or the softness a color.

If it is possible to remove all properties from a thing you will have no thing. If you can remove one property which is an attribute of it, it will not be the same thing. But the question is: can you remove just one property of a thing, accidental or not?

6
Is the universe just a mathematical construct?
3
Does existence precede quiddity?

2
What exactly does Avicenna mean here?
6
In Aristotelian metaphysics, what are the constraints on what a thing can potentially be?
4
Implication of Rorty's concession to Ramberg that true statements "get things right"?
2
By its definition, is it possible the thing-in-itself is also a phenomenon?
2
What is the definition of 'object' in philosophy?