Who does Wil Wheaton represent in "Big Bang Theory"?

Following the aesthetics-challenge my first question on this site: 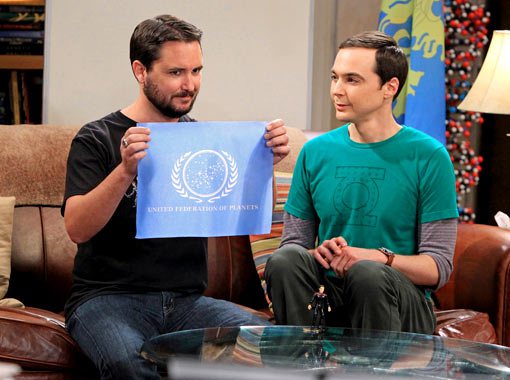 In the credits it is stated that he plays "himself". But I have problems with that statement. It seems to me that there are two different entities: The A-ctor on the set of Big Bang Theory and the C-haracter he portrays. They must be different entities because they have different properties: A has no friend named Sheldon Cooper. C was never actor in a show named "The Big Bang Theory". So following Leibniz A and C cannot be the same entity.

Also with this approach we create a whole new set of entities: To every C there is also an A then, and that's not exactly ontological parsimony.

Are there any theories dealing with cameo-problem? And if so: How is it dealt with?

Let's use object orientated because that is freakishly easy notation for this problem.

So if someone asked me what character Wil Wheaton plays in the The Big Bang Theory, I would say "He plays Wil Wheaton" which is the verbal representation of the statement above in OO notation because context is reasonably clear from the discussion.

For example, my name is Calvin. Moreover, the protagonist of my perception of reality is Calvin. So I have two Calvins.

However, there are certain differences. For example, (Calvin's Perception).Calvin was not born, but just slowly emerged into consciousness over time (due to the nature of memory). However, this difference can be reconciled by viewing these different Calvins as different instances of the same Calvin across multiple abstractions of reality.

Or at least, that makes sense to me.

It seems to me that playing yourself and being yourself are two very different things. Even in real life we often portray some version of our selves that are neither wholly distinguishable from the selves we really are, nor wholly capable of being identified with those true selves.

Clearly this requires a conception of identity that might be characterized as unconventional, but there's ample precedent for it in the philosophical tradition. For example, a Platonist might consider all of us to be portraying illusive characters in light of the Platonic belief that we are all poor copies of a more ideal reality.

From this point of view, Wil Wheaton playing "himself" on television is not so very different from him "playing" himself at a fan convention, or from what any other public figure does to develop a public persona distinguishable from his or her private self.

"Himself" seems to take care of the problem. If it said "Wil Wheaton" is played by "Wil Wheaton", then you get all recursive - like "why is the character not talking to 'Johnny' and 'Jim' and talking about members of the studio audience?" 'Himself' is a colloquial shorthand for "in this story, our characters crossed paths with famous-person Wil Wheaton, who portrayed himself in order to create a more realistic story."

An ironic counterpoint is Louis C.K., who has various actors portray him and his friends and family. It's fascinating to see yet another actor playing C.K. at a different stage of his life. He has a black actress portray his wife. I wonder, is his wife black? But in a recent show, he showed a white woman and yet another male actor playing him and his wife, a decade earlier. I love when he does that, because he drives that philosophical nail in with a feather. Delightful!

Related: The celebrity paradox, which points out that actress Jeri Ryan enabled Obama to become president, but not in the Star Trek universe...

Not the answer you're looking for? Browse other questions tagged ontology philosophy-of-language aesthetics or ask your own question.

8
Is there a philosophical term or theory that defines or describes the idea of 'epiphany'?
0
Does gender theory explain gender in linguistics?
5
How materialism can be consistent in the context of qualia and simplicity?
7
What does disposition mean in dispositional theory of meaning?
3
Does category theory solve Benacerrafs problem adequately?
9
How can we take the ontologies of our best physical theories seriously?
3
Does anyone know any philosophers who engage with (ordinary language) dictionaries in their work?
4
The Immortal Jellyfish