Are ordinal or cardinal infinities theories for real?

There are a number of notions of infinity in mathematics that are respectable. One of the first is 'the point at infinity' to the line or plane; but one can argue that this is a spurious infinity as in another perspective this simply closes up the line to make a circle; and the plane to make the surface of a sphere.

In mathematics this construction is called 'compactification'; as the spherical surface is 'compact' in a way that the infinitely extensive plane is not.

*. It 'looks' possible to embed the long line into the Hilbert cube; which though having a countable number of dimensions is formally compact in another standard topology.

Here is the short mathematical answer :

Here we are assuming the natural "order topology" is used. The result for cardinals follows from the result for ordinals since an infinite cardinal must be a limit ordinal.

If λ is a limit ordinal, then λ+1 is a "one-point compactification" of λ which we might loosely express as :

borrowing our notation from that of intervals in the real line.

The notion of compactification you describe in your question is strongly Euclidean and so does not readily apply to the ordinals in general. However, because it is tempting to view the ordinals as a line in the plane, there are number of nifty pictorial representations of infinite ordinals, drawn in a compact region of the Euclidean plane. Here is one I found via google images of the limit ordinal ωω as a spiral : 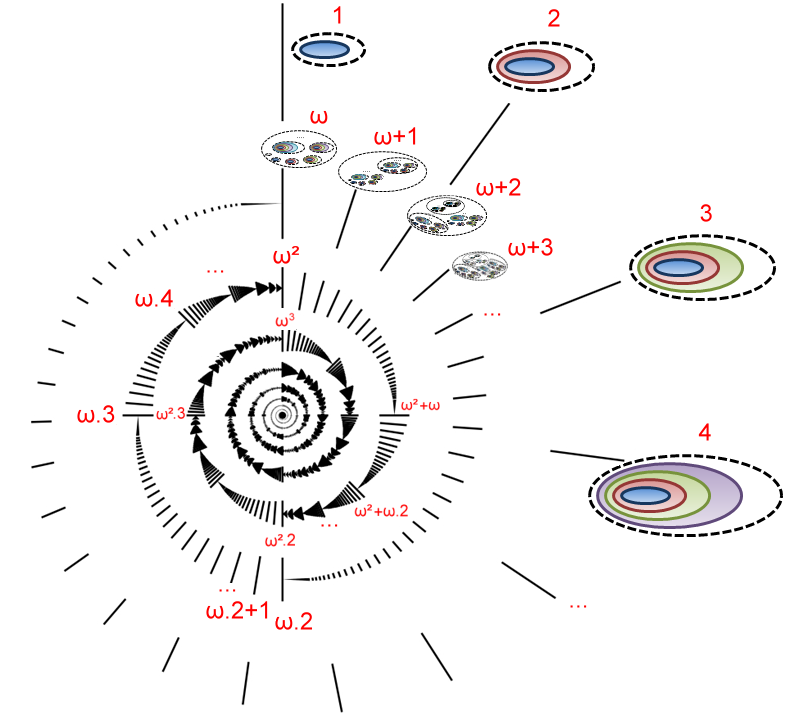 Intuitively, this type of Euclidean pseudo compactification would only work for countable ordinals such as ωω, pictured here. One can (almost) imagine extending this picture to a higher countable ordinal by replacing each ordinal in this depiction with a copy of ωω to obtain something like ωω2 perhaps(?) (I'm not sure). Imagining further substitutions beyond that, things become less clear. The first uncountable ordinal ( ω1 ) would be at the "limit of the limit of the limit ..." of this process - if that makes any sense.

This sort of doodling is fun, but unfortunately it does not say anything about the formal, topological view of compactness among the ordinals.

EDIT : When one considers the class of all ordinals, compactification seems wholly inappropriate. Re-reading this post, I think that most of what I've said, after the initial mathematical statements, is waffle. Probably just a shameless excuse to squeeze in a pretty picture. The whole idea of closure is contrary to Cantor's formulation, as suggested by @Conifold 's comment below, even if it is well-defined from a topological point of view.

At least some ordinals and cardinals are for real. There is a notation for them such that you can write them down. But writing them down is not enough. You also want to be able to decide whether two different written down cardinals are equinumerous. For ordinals, you even want to compare them relative to their order, because the order is important for ordinals.

Now comes the problem. You can even write down the cardinal "1" in a way that it is nearly impossible to decide whether it is equal to "1" or not. But this is definitively not the fault of the cardinal "1". It's also not necessary a fault of the notation, because any sufficiently expressive notation will also allow to write down hard to decide expressions. (By hard to decide, I'm thinking of a computer which runs out of memory or time while trying to decide equinumerity.) For ordinals smaller than omega, writing them down in binary form makes it relatively easy to decide equinumerity, but converting such an ordinal from an arbitrary notation to this notation can increase the size of the description "more than" multi-exponential. But at least there is a notation which allows do decide equinumerity for these ordinals in principle. Such a notation also exists for significantly larger ordinals, but beyond a certain ordinal, no such notation exists any longer.

In some sense, it is clear these things are idealization, but they capture human intuitions that simplify or organize notions of arbitrary complexity or continuation. So they are Platonically 'real'. The complexity they model is not necessarily geometric or topological, just about relations. So I am not sure why anyone cares about their compactness.

I would say that compactness is not what is primarily gained by closing the complex plane, the real line, etc. A great deal of intuitive value is added by adding various idealized numbers into computations. Consider the nonstandard analysis of Los, et. al. It allows the kind of 'Cauchy-style' arguments that calculus used early in its logical development. Physicists routinely use this style of argument, involving infinitesimals and meaningful integration over discontinuous deltas, to simplify their handling of calculations. Creating these extra 'things' lets us write down the rules that tell us when such intuitive arguments are trustworthy, and when they cross a line into meaninglessness.

The closure of the complex plane is not important primarily because it is compact, but because it gives a total symmetry to computations involving things like conformal flow. The artificial infinities of the reals are helpful in avoiding carefully tracking epsilons and deltas that will slowly drive you nuts. The artificial infinitesimals make it possible to think through more complex analytic problems with less work.

Ordinal and cardinal infinities play a different role, in facilitation things like transfinite induction. It can be quite hard to imagine handling all varieties of sets and tracking all edge cases, but the isomorphism of L or V to the whole category of sets leveraged through ordinal induction gives us a way to prove things about arbitrarily varied structures in a systematic way.

Not the answer you're looking for? Browse other questions tagged philosophy-of-mathematics infinity or ask your own question.

11
What is the difference between an Ordinal number and a Cardinal number?
4
What are the necessary conditions for something to be eternal?
19
Are numbers real?
5
Are there theories of arithmetic that are inconsistent with the natural numbers?
12
Are infinities in physics (or in any other materalist philosophy) actually possible?
6
What are the “undefinable numbers” in real analysis and philosophy?
0
Are mathematical spaces falsiably real?