Is there something in syllogism that is not covered by set theory?

I was looking at the wikipedia article on Syllogism where it describes the different types of syllogisms.

I understand the usefulness of syllogism when first introducing logic, and I also understand that it is much older than set theory. But I find all those descriptions much harder to understand than if I simply think in terms of sets. I spent a few minutes trying to understand one of the types (Modus Celarent) only to realize it was obvious if you think about it using sets.

So my question is the same as in the title: is there something in syllogism that is not covered by set theory? Or, more weakly, is it still useful to learn about it once you have the basic intuitions about sets?

As regards the first question, the answer is a negative one, since terms can be interpreted as sets, and the syllogistic relations as relations between sets. I have mentioned one way of achieving this elsewhere, so I'll just repeat Definition 1 from that post here for your convenience:

Usefulness though is a relative notion; just because we can find set-theoretic models of the syllogistic, it doesn't mean that taking the syllogistic relations as primitives is a useless idea. Compare this situation with modal logic: there is what's called a standard translation of modal formulas into first-order logic. Despite that, we find it useful to take at least one of the usual modal operators as a primitive and define things in terms of it.

Two mistakes in traditional usage of syllogisms were discovered by Peano, Freg, Whitehead & Russell, and were subsequently removed from set theory.

Before Peano and Freg, traditional syllogisms mistook the relation of membership (∈) for a particular case of inclusion (⊂). This was pointed out by Peano. As a matter of fact, in virtual of traditional Barbara(AAA), "Socrates is mortal" can never be asserted. The following is an excerpt from Russell & Whitehead's Principia Mathematica: 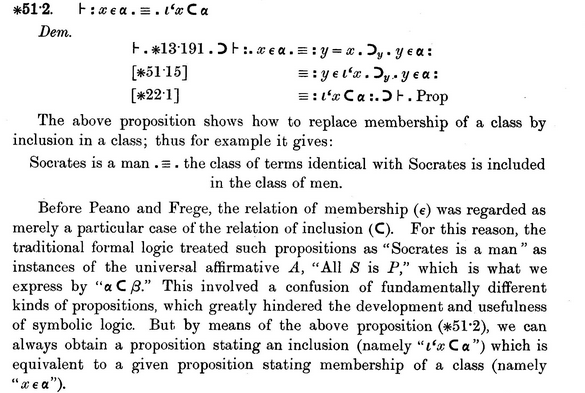 Whitehead & Russell pointed out that:

It should be observed that syllogisms are traditionally expressed with "therefore," as if they asserted both premises and conclusion, this is, of course, a slipshod way of speaking. Since what is really asserted is only the connection of premisses with conclusion. (Source: Whitehead & Russell, Principia Mathematica. Merchant Books, 1910)

For example, the following implication is true even though both its premises and conclusion are false:

If all horses have wings and goats are horses, then goats have wings.

6
Aristotle's Syllogistic and Proofs by Contradiction

5
Is there a One True Set Theory?
3
What is Naive Set Theory?
3
Why do we have a problem about understanding the concept of the "empty set"?
2
Russell's Paradox and the Law of Non-Contradiction
7
Are the "laws" of deductive logic empirically verifiable?
3
Is there a form of set theory involving imperatives and interrogatives?