Cannibals ambush a safari in the jungle and capture three men. The cannibals give the men a single chance to escape uneaten. The captives are lined up in order of height, and are tied to stakes. The man in the rear can see the backs of his two friends, the man in the middle can see the back of the man in front, and the man in front cannot see anyone. The cannibals show the men five hats. Three of the hats are black and two of the hats are white. Blindfolds are then placed over each man's eyes and a hat is placed on each man's head. The two hats left over are hidden. The blindfolds are then removed and it is said to the men that if one of them can guess what color hat he is wearing they can all leave unharmed. The man in the rear who can see both of his friends' hats but not his own says, "I don't know". The middle man who can see the hat of the man in front, but not his own says, "I don't know". The front man who cannot see ANYBODY'S hat says "I know!" How did he know the color of his hat and what color was it?

Man in back: I don't know proves that the hats in front of me cannot be both white, because the only possible way he could know would be if both hats he saw were black, therefore one is black and one is white.

Man in middle Knowing this information, the man in the middle thinks the following things if he sees either scenario:

He sees a black hat on the man in front of him: His should be able to conclude that his hat is white because there is a hat of each color, so if the one in front of him is black, his must be white

He sees a white hat on the man in front of him: He is able to conclude that his hat is black because since there is a hat of each color, if the one in front of him is black his own must be white

In the answer given, it's required to hear the third man before we can know the answer, but why isn't my above solution correct? which solves it in only 2 steps.

He sees a black hat on the man in front of him: His should be able to conclude that his hat is white because there is a hat of each color, so if the one in front of him is black, his must be white

That is wrong; assuming the first (to answer) prisoner gave the correct answer, the second prisoner can only conclude there can't be two white hats, and since he said he didn't know what color was the hat he was wearing, it implies the prisoner in front was in fact wearing a black hat.

That is how the prisoner in front knew what color was the hat he was wearing.

It can be done in one step. The first man sees two white hats and says that he knows.

But, you say, the problem says that the first man says "I don't know"?

Exactly. The problem's definition is also specified by the second man saying "I don't know." 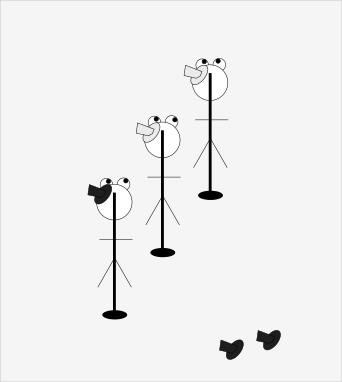 The riddle is solvable without further assumptions, and it takes three steps.

Not the answer you're looking for? Browse other questions tagged logic epistemology society or ask your own question.

2
an argument about a logic question
3
BHK Semantics and Homtopy Type Theory
2
Would two identical people ever be able to communicate successfully?
2
Can Camus' 'The Absurd' Be Arrived At Through Reason?
1
Philosophy of beauty / Science
10
πίστις (Faith/Conviction) In Plato's Apology
19
What is the term for the fallacy/strategy of ignoring logical reasoning intended to disprove a belief?
3
Does an implied premise mean a formal fallacy if used in deduction?
2
Popper on probability
0
How can the mere observation of race (without an assertion of equivalence) logically be considered racism?