Was Aristotle an Empiricist?

When I was taught about Aristotle and Plato, the picture I got was very much like this image from a Raphael fresco: 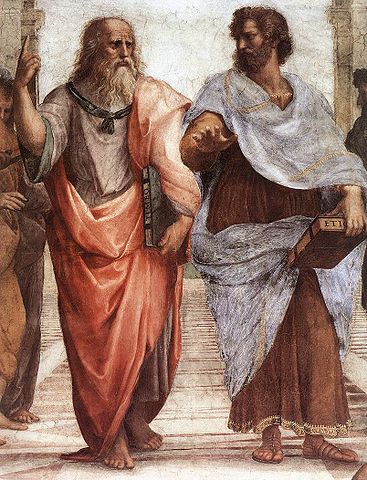 Usually Plato is said to be pointing to the heavens, which represent abstract Forms, while Aristotle gestures to the Earth (or possibly breaking the fourth wall and indicating the viewer) to symbolize his commitment to Empiricism. Certainly in an epistemological landscape dominated by Pythagoras and Plato, Aristotle emerges as practically David Hume in relation.

But reading Aristotle directly and especially the book he is shown to be holding in the painting (Ethics), I find Aristotle's epistemology to be far more balanced. While he certainly prefers inductive arguments when he can make them, he isn't reluctant to argue deductively from a priori principles that we might not agree with. In fact another popular characterization of Aristotle is that his philosophy held back science by insisting on claims that were not evident in nature. Some of these claims (such as heavier objects falling faster than light ones) could easily have been rejected with very straightforward experiments.

So ought we to think of Aristotle as a man who was born two thousand years too early to be a part of the scientific revolution or as a man who wished to moderate Platonic dogma?

Empiricism and its opposite Rationalism are positions about the nature and origin of knowledge. Empiricists say that knowledge comes from experience. (Empeirea is the Greek word for experience.) Rationalism on the other hand says that we have at least some knowledge innately, i.e. prior to experience. In this sense Aristotle is definitely an empiricist. He says explicitly in a number of places "all knowledge begins with the senses."

However, Aristotle isn't exactly a proponent of natural science in the sense that we think of the natural sciences today because he hasn't got the idea of an experiment in the sense of a repeatable, precisely measurable, controlled trial. Aristotle's scientific method does depend upon observation, and sometimes his observations are quite keen. He is the first person we know of to run the experiment where you trace the development of a chicken embryo by cracking different eggs at different days from fertilization. Also he describes a large number of marine species and insects. However there are some egregious errors as well: Aristotle believed that women have fewer teeth than men, for instance.

So is Aristotle the first scientist? I think it depends what you mean by a "scientist". If you mean somebody who has the idea of the experimental method and who performs rigorous experiments, then no he doesn't. Although, by that criterion, I'm not sure Galileo or Francis Bacon would have been "scientists" either. On the other hand, it is clear that Aristotle is the first person to set about giving a systematic explanation of nature in terms of simple principles based upon observation. And that is an important intellectual achievement.

My familiarity with Aristotle is mostly secondary, in particular the Jewish philosophers of the middle ages who had to reckon with it as the prevailing "scientific" opinion of the day [and even then my familiarity is imperfect]. Nevertheless my impression is that whatever empirical tendencies he may have had must have remained largely in embryonic form. Off the top of my head perhaps this position is illustrated by his view that heavenly bodies traveled only in perfect circles, while this was known not to be the case even among later Greek thinkers.

And while it may not have been his intention, my impression is that his acceptance as an authority led to stagnation in areas of research which he had spoken on exasperating his on non-empirically sound conclusions.

I think the following quote kind of sums up Aristotle's influence on science, "I said this before, but I want to emphasize it. In spite of the fact that the details of Aristotle’s logical theory no longer have value for us, the fundamental value of his contributions must never be forgotten: He created a science of logic where before there was nothing." http://ocw.mit.edu/courses/linguistics-and-philosophy/24-241-logic-i-fall-2005/readings/chp01.pdf Nevertheless, I'm not so sure we can give him a lot of credit as an empiricist.

Not the answer you're looking for? Browse other questions tagged epistemology history-of-philosophy aristotle empiricism or ask your own question.

9
What is the purpose of Plato's concept of Form?
3
Is Empiricism "False"?