What is one divided by zero?

The Pythagoreans were (probably apocryphally) disturbed by the discovery of irrational magnitudes; its useful pointed out here, that irrational means, in one sense, and not now generally alluded, simply not a ratio; which is a precise description of what this kind of magnitude is; this suggests the understanding of irrational, as being unreasonable, crazy and made maybe a later accretion; one would have to do a little philological investigation to check this; and it would be interesting (to me) to speculate on what pressures effected this change.

This however prompts the question what other properties of the natural numbers with its usual operations (which are present-at-hand ie easy enough to conceive - addition, multipliction and powers). There are several, and are major discoveries.

This leaves one with the question what is the corresponding mathematical concept/theory for 1/0?

The only right answer seems here is Cantors transinfinite artithmetic.

Is this right, or is there a better answer?

It should be noted that describing calculus as an analysis of 0/0 is, at best, such imprecise short-hand as to say virtually nothing — similar to saying that the two-slit experiment proves that electrons can be in two places at the same time. In each case, the description is certainly one way to hurriedly describe what's going on, but omits absolutely all of the machinery and crucial concepts which would make it instrumental — and therefore worth saying. With this in mind, if we are operating on the level of stretching of descriptions in which calculus is a theory of 0/0 (via the concept of a limit of ratios, e.g. in computing derivatives), then it is also a theory of 1/0 (by that same concept of limit, both in computing ratios and in integration).

Much of the interest in foundations of mathematics was spurred on by what was considered to be weaknesses in calculus, indeed by the fact that it originally dealt in such concepts as 0/0, whereas it is a student's exercise to show that admitting 0/0 as a signifying expression immediately allows one to prove 0=1 (and is therefore problematic if you prefer to distinguish between such numbers). In place of limits, we may use a modern development of infinitesimals to recreate calculus in the original spirit of Leibniz and Newton: but while an infinitesimal is smaller than any positive real number and may be describable as 1/infinity (for a sufficiently precise definition of "infinity" as a number by which one may divide), an infinitesimal of the sort useful for calculus is still not zero in any non-trivialising classical model of logic.

We may construct the negative numbers only by abandoning the notion of a lowest number, and the rationals by abandoning the notion of a smallest; whereas the complex numbers demand the abandonment of the idea that numbers can be ordered in any way at all, consistent with having any meaningful relationship to multiplication. A similar extension to allow 1/0 or 0/0 to signify would require us to abandon either the idea that multiplication and division are inverse operations, or a relationship of multiplication to addition. To obtain a mathematical theory with utility, it proves better to use subtler approaches than division by zero, and to leave 1/0 as a gloss as imprecise as the words "big" and "small".

Your first two examples are distinctly different from your third example in that, while 3-12 and sqrt(-1) do in fact end up having well-defined results once you work in the right domain (the integers and the complex numbers respectively), there is no domain in which 0/0 currently has a well-defined value. Yes, nonstandard analysis gives a way of evaluating expressions that under normal arithmetic would seem to equal 0/0. But instead of directly assigning a number to 0/0, it solves the problem by changing the arithmetic we work with so that the expression is never equal to 0/0 in the first place, and is instead the quotient of two infinitessimals. In particular, 0/0 does not itself have a value, even in the hyperreal numbers, and in general there is no field in which this expression makes sense. The best you can do for 0/0 is allowing division to be a multi-valued function, in which case 0/0 = R, the entire set of real numbers, or whatever other set you happen to be working with.

My point is that the "problem" of 0/0 (if it is a problem at all) was not solved by calculus, as you seem to suggest it was. We have the same problem as we had before, only we have avoided it in many cases by creating a bunch of infinitesimal numbers which live alongside zero.

The situation is similar with 1/0. Firstly, there seems to be a contradiction involved in giving it a value at all, just as there is with 0/0. What do I mean by this? I mean that in any context where it makes sense to refer to an object as 0 and another object as 1 (i.e., in a context where there is an additive and a multiplicative identity), and where it makes sense to divide by things, it does not make sense to compute either 0/0 or 1/0. More precisely, both are undefined in any ring other than the trivial ring {0}.

To take the multi-valued function approach as before, we can let 1/0 equal the empty set, or maybe the set {infinity, -infinity}. And there are undoubtedly other ways of attempting to give a value to 1/0. In fact, I could just say "define 1/0 = 3" and be done with it. But what would I have accomplished if I did so?

The problem one might have with your question is that it idealistically assumes that 1/0 should have a value. It assumes that there is some abstract platonic object out there that is 1/0, and that this object has some sort of properties. I think many mathematicians would contest this. Your desire that 1/0 have meaning is no more than a desire, and is similar to the desire of many mathematicians pre-Godel that all true statements have proofs. It turns out, of course, that not all true statements can have proofs in any sufficiently meaningful system, and similarly one might postulate that not all numbers can be divided by in any sufficiently meaningful system.

Not all mathematical conclusions are of a positive nature. In the case of sqrt(-1), a positive and useful number system was developed. In the case of 1/0, the most important results are of a negative nature, showing that any number system in which this makes sense must break certain fundamental and important properties (associativity, commutativity, and so on). The most reasonable conclusion is that the former makes sense while the latter does not, or if the latter does make sense, then it can only make sense in a vastly different context, with vastly different rules of arithmetic than we are used to.

I've been thinking about this a bit more after reading your comments. There is at least one big area in which 1/0 has been given serious attention and consideration, and that is in complex analysis. (Disclaimer: I'm not an expert on this topic.)

The complex numbers are commonly extended by adding a single point at infinity. The most natural way to think of this is to consider the Riemann sphere; every point on the complex plane naturally projects on to the Riemann sphere, except the very top of the Riemann sphere has no point associated with it. Thus we may define a new number, complex infinity, and associate it with the top of this sphere.

The new infinity is useful topologically because it turns the set of complex numbers into a compact set. But the new infinity has algebraic properties as well. Unfortunately, infinity + infinity is undefined. But z/0 = infinity for any complex nonzero z. In particular, 1/0 actually equals complex infinity in this context (so this may be an answer to your question). See here.

In complex analysis you are interested in complex infinity because it comes up naturally in such functions as (z^2 + 1) / z or (e^z - 1) / (e^(z^2) - 1). These functions are well-defined almost everywhere, but it is unclear what the function is equal to at z = 0. It turns out that if you take one of these functions that is holomorphic except at certain isolated points then you can define a ``Laurent series'' for it, which might looks something like

You can then evaluate the function at 0 using the series:

So in this precise context, diving any complex number by zero is not a huge problem. (Actually, just as was the case with 0/0, we are not actually working with the number zero here, but rather are taking some sort of limit or infinitesimal value, similar to what was going on in formalizing calculus. So the complaints from my original response still apply. Nevertheless, you seem to be after a conceptual way to give meaning to 1/0 rather than a literal way to give meaning to it, so this may be something like what you're looking for.)

I wouldn't say exactly that 1/0 is a problem of analysis. I.e, this proposition belongs to cardinal arithmetic, of the most basic type (finite), and real analysis pressuposes the propositions of this theory for it's construction. So 1/0 is a problem of arithmetic alone. You're right when you say Cantor's work is the only way out, but we don't have to go into the arithmetic of alephs, since 1 and 0 are finite cardinals. Actually, the solution is simple, and Quine already give it in his Mathematical Logic. Also, you can easily derive it from the logic of the following papers: https://archive.org/details/jstor-2370026; https://archive.org/stream/rivistadimatema00peangoog#page/n128/mode/1up.

The solution is this: we begin with the "pure" theory of ratios, by it we get to the theory of divison and applied ratios (i.e, measurement, see https://archive.org/stream/PrincipiaMathematicaVolumeIii/WhiteheadRussell-PrincipiaMathematicaVolumeIii#page/n413/mode/2up), and then we show that a/0 (for every FINITE cardinal a) is the relation which holds for every x,y when x is Ncfin and y=0. The solution is in the third page. Have a nice day! 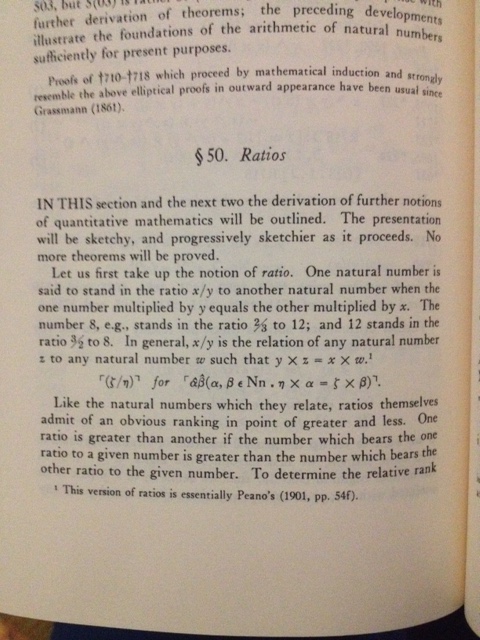 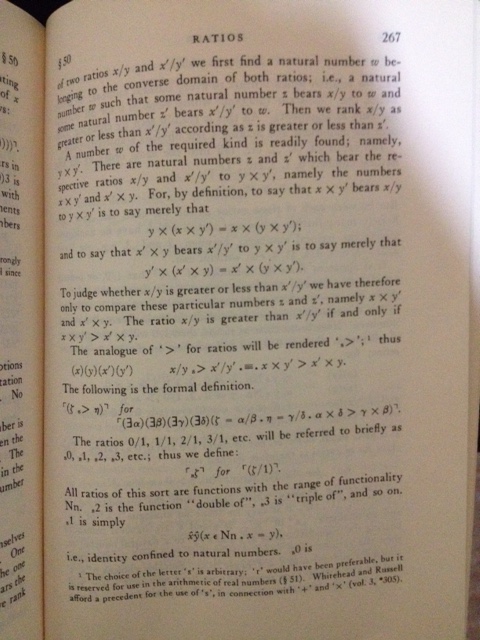 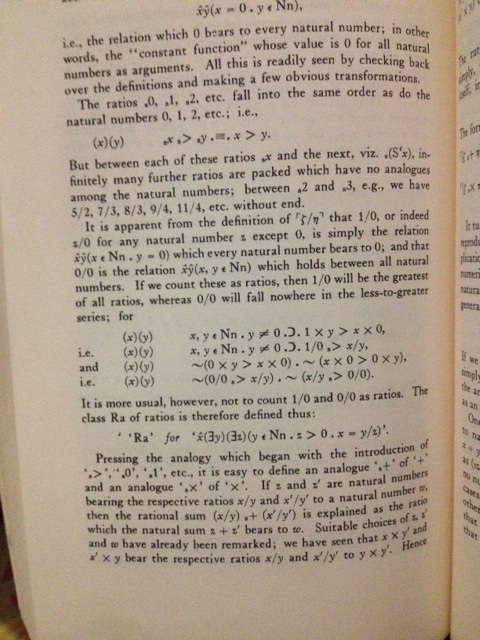