Ask Question
Asked 9 years, 5 months ago
Active 9 years, 5 months ago
Viewed 193 times
-3
It's difficult to tell what is being asked here. This question is ambiguous, vague, incomplete, overly broad, or rhetorical and cannot be reasonably answered in its current form. For help clarifying this question so that it can be reopened, visit the help center.
Closed 9 years ago.

Is it true that human in outer space can't differ right side and left side? Around human no another solid.

If you remove all objects of relation, then yes, any directional terms would be meaningless. There is no intrinsic North or South of the universe ("North" for humans typically just means in relation to the geographic North Pole).

This is fairly simple to conceptualize if you remove yourself from the picture, but that can be somewhat challenging to do. I can provide an example but I hesitate in that it may only pollute this otherwise pure notion. But for example, if you were driving and came to a fork in the road which split off in four different directions all facing left, and your friend asked you to "take a left", would that help you? How would you know whether it meant to "take a left" in relation to you ("your" left) or in relation the number of lefts ("first" left) or to one of the roads or a sign or what? Without knowing the relation, the term "left" is without meaning. 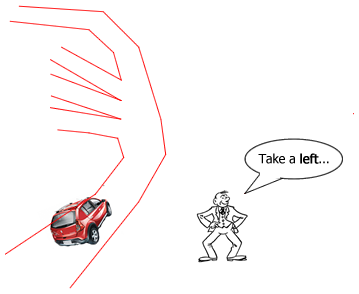 In space, there would be directions available to the individual if that individual is aware of the navigational conventions that are used by others. If you know how to locate a "North" of your planet, solar system, or galaxy, then you could with some effort determine the direction of objects relative to each other. That means that it's basically as stoicfury mentioned, that direction is entirely dependent on your frame of reference. Thus, you need to know how something is oriented in space before you can determine the directions that are left/right/up/down/etc... relative to that object.

So to answer your question, it is NOT true that a human (you for example) in space cannot determine left and right, because with no other points of reference, that your own body becomes the referential center of all of the directional vectors that you could conceive of in that situation. If on the other hand another person (me for example) appeared nearby, then you would have a second point of reference for directionality. I might be floating down and to the left of you, but my orientation might mean that you are also down and to the left of me. Change my orientation, and my direction from you stays the same, but your direction from me changes. If I disappear again, then you revert once more to a single point of reference, being your own sense of direction from yourself.

Right and Left is defined relative to the side which the heart is located.
When you turn left, where do you turn at?
And when you say to the right of an object, at which side do you look at?

But I think you are confused because in outer space some of those concepts that are defined whithin a concept of relation to something else, indeed do not exist out there.

E.g. there is no East and West or North and South or Up ands Down (to say my up as in my left is an meaningless phrease)

But right and left should be conceivable if you accept the above definition.

Not the answer you're looking for? Browse other questions tagged logic philosophy-of-science or ask your own question.

0
Kant's idealist view of space vs. modern science
0
Does the analogy “dog is to proximal environment as human is to Reality” portend anything for a maximum theoretical level of intelligence?
2
Did Aristotle know that Moon revolves around the Earth?
3
logical fallacy: X is not wrong, if you have done X
0
Proof with conditional introduction
3
How do you work with a non-classical metatheory?