Does the phrase "vacuous tautology" have specific meaning?

However, I have only passing familiarity with formal logic, so I wanted to know if "vacuous tautology" uncovers some lack of understanding I have of the concepts of tautology and vacuity. Are there cases in which a tautology is not vacuous? If so, what are the conditions for a statement to be called a vacuous tautology rather than just a plain old vanilla tautology?

Perhaps this question is more appropriate for the English SE, but I thought I would ask here since I am really interested in the use of tautology and vacuous from the standpoint of formal logic.

As you seem to suspect, the phrase "vacuous tautology" is pleonastic. The modifier "vacuous" is not necessary.

However, it is probably being used to rhetorically highlight the particular vacuity of the tautology.

It is not a term of art, and has no specifically defined meaning as a sub-type of tautology.

Some tautologies are obvious; others are not. I assume that the writer was trying to convey that the tautology was obvious. A non-obvious tautology can still be illuminating, since you may approach a problem two different ways and not realize that two different claims actually work out to be the same thing.

In his book "About Time" author Adam Frank explains a philosophical (opposed to the mathematical) aspect of work on the cosmological argument. Managing the troubling issue of a universe which evolved under "exactly the right conditions", scientists have used tautologies. Here are a few examples,

As you can see statements 1 and 2 are sort of useless, while statement 3 makes a bold statement about the laws of physics. In this context I might suggest example 1 and 2 are "vacuous tautologies" while 3 is not.

One possible meaning of "vacuous tautology" is for those tautologies where there is no line in the truth table where all of the premises are true. This would not include all tautologies. So maybe that was the intent.

However, the phrase "vacuous tautology" should raise questions. Since the source of the phrase is missing all we have to go on is to try to make sense of the phrase as it stands using other references to get a clearer definition.

The OP offers the following for consideration:

Now, based on my understanding, by definition a tautology has no content and is therefore always vacuous.

A tautology, however, is not without content. It has a semantic content and means that the well-formed formula is true for all possible valuations of the atomic sentences composing it. This is how forall x (page 70) describes it for truth-functional logic (TFL) also known as propositional logic:

The idea of a tautology being true on every valuation is semantic content. So it does have some content, some semantics, but nothing else.

Quine discusses the semantics of English sentences (syllogisms) in more detail and whether the words in those sentences are essential or vacuous. (page 2):

Note that this description applies to English sentences and syllogisms not to truth-functional logic where most of this content would be lost when the English sentence is symbolized as some letter, say, "P". 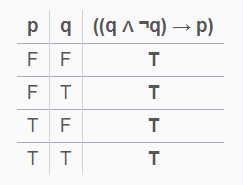 Tautologies are often considered together with the ability to construct a truth table. This restricts them to truth-functional logic, but the concept of vacuous has additional value in first order logic where there are quantifiers over terms representing members of a domain. The domain is assumed to be non-empty unless one allows "free logic", but a predicate in first order logic may be empty. These empty predicates can be called vacuously true if there are no elements of the domain having that predicate.

Here is how forall x (page 165) describes this situation:

Keeping the above in mind, let's summarize why the phrase "vacuous tautology" should cause the OP to be suspicious.

The idea of a term being vacuous usually applies to words in English sentences (syllogisms) or to sentences of first order logic involving empty predicates. Tautologies which are well-formed formulas of truth-functional logic are at least intuitively separate from both of these contexts. So referring to something being a vacuous tautology requires more explanation.

However, if a tautology is formed when there is no situation, or row of a truth table, where all the premises are true, then that might represent a vacuous tautology in a way that is not redundant.

Not the answer you're looking for? Browse other questions tagged logic tautology or ask your own question.

10
Can there be a valid argument which has a tautology as a conclusion?

2
Is "Unreasonable Effectiveness of Mathematics in the Natural Sciences" a tautology?
3
What is the difference between a logical truth and a tautology?
5
Rigorous, modern introductions to informal reasoning and critical thinking?
2
If this is a logical fallacy, does it have a specific name?
1
A case of vacuous truth : Have you taken part in your department's open discussion session already?
0
In the context of philosophical logic, what does 'extra-logical' mean?
3
Why do “subject” and “object” not have opposite meaning?