Help with a proof in Classical Sentence Logic

Premise: (A implies B) implies C

Conclusion: (C implies A) implies A

I had a logic exam a few hours ago and this was one of the problems, but I really didn't know where to start. Since the main connective of the conclusion is an implication, I figured I should assume (C implies A) and prove A...but this didn't lead anywhere, and I didn't have time to try out any other (more obscure, perhaps) lines of reasoning.

I think it would be a touch easier with derived rules and rules of replacement, because associativity and idempotence help to simplify the conclusion. But we were supposed to use only the "main" rules of Classical Sentence Logic.

Natural deduction is as much an art as a science --it takes some creativity. You might check my answer to How to prove a theorem using Sentential Derivation for some general advice. Keelan's method of solving is correct (and quite clever), but I suspect it might baffle a beginner. For that matter, it wouldn't have naturally occurred to me. I personally solved it in a somewhat more labor-intensive manner.

You'll want to follow along by diagramming this (using whatever system you have been taught). You'll see it gets a little complex because of all the nested assumptions. However, as long as you are careful, they will all clear up neatly. You can't be afraid to make assumption after assumption, as long as you always know how deeply you have traveled. It's also OK to make contradictory assumptions, if they serve a purpose.

Keelan's version, which is shorter and less nested, starts from the fact that C OR Not C is a tautology (it is always true). Some systems will allow you to start with this, others would require you to prove it first.

We make a case distinction over C.

Suppose C is false. Then, following the premise, (A → B) must be false (otherwise C would have been true). Now, recall the truth table of implication. (A → B) is false iff A is true(, but B not). Therefore, the statement holds for C is false as well.

First we assume the premise,

Case 2: not-C is true (that is, C is false). The contrapositive of the premise states:

so we may conclude

This negation may be rewritten as

Thus A is true. Done.

This is an alternate proof provided since the OP had a constraint which this might fill:

But we were supposed to use only the "main" rules of Classical Sentence Logic.

Although this proof checker had a modus tollens rule it did not have a rule going from a conditional to a disjunction. Hence it might be closer to the available inference rules. 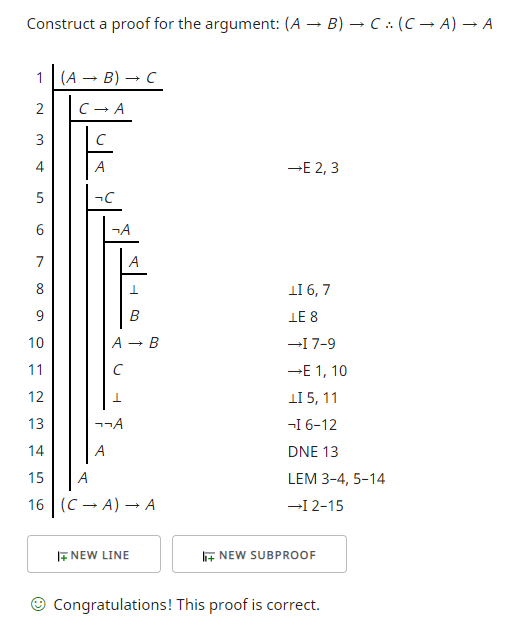 Not the answer you're looking for? Browse other questions tagged logic proof or ask your own question.

1
How to prove a theorem using Sentential Derivation

4
Help with simple deductive proof
4
help with deductive proof
3
Help with a proof for the following arguments
1
The validity of the definition of a valid argument
1
Predicate Logic proof help
2
McGee's Counterexample to Modus Ponens
2
Fitch Biconditional Proof Help?
1
Help with an existential natural deduction proof