Aside from logical representations, what are other ways philosophers approach representing knowledge?

Of course different arguments can be neatly spelled out in logical symbols, but logic isn't sufficient for all kinds of knowledge.

I know the issue is represented in different ontologies in the world of computer sciences (very different from the meaning within philosophy), but even ontologies have their drawbacks. What other approaches are there to describing in a meaningful way different kind of knowledge, like knowhow and tacit knowledge.

For example, as an ornithologist, I can easily recognize a bird just by its silhouette, its call, or it position in a tree -- but I'm not sure exactly what combination of features is relevant. Even if it's just its call, I'm not sure what features of the call are salient to be used by the identification process. This knowledge is all tacit, gathered during my years of birdwatching. If I wanted to build an imaginary "bird recognizer" that recognizes birds with the same accuracy that I have, I'm not sure what sort of knowledge representation one could use.

I wouldn't say that the concept of ontology is necessarily different between philosophy and computer science, only that the latter have developed more sophisticated and explicit domain models in order to drive applications. Philosophers have often wanted to focus on the "top level". Aristotle's categories were an early attempt to classify everything in the physical world. More recently, the Cyc model of Lenat & Guha has been built up over a decade or more and now has five hundred thousand terms, seventeen thousand types of relations, around seven million assertions relating the terms. 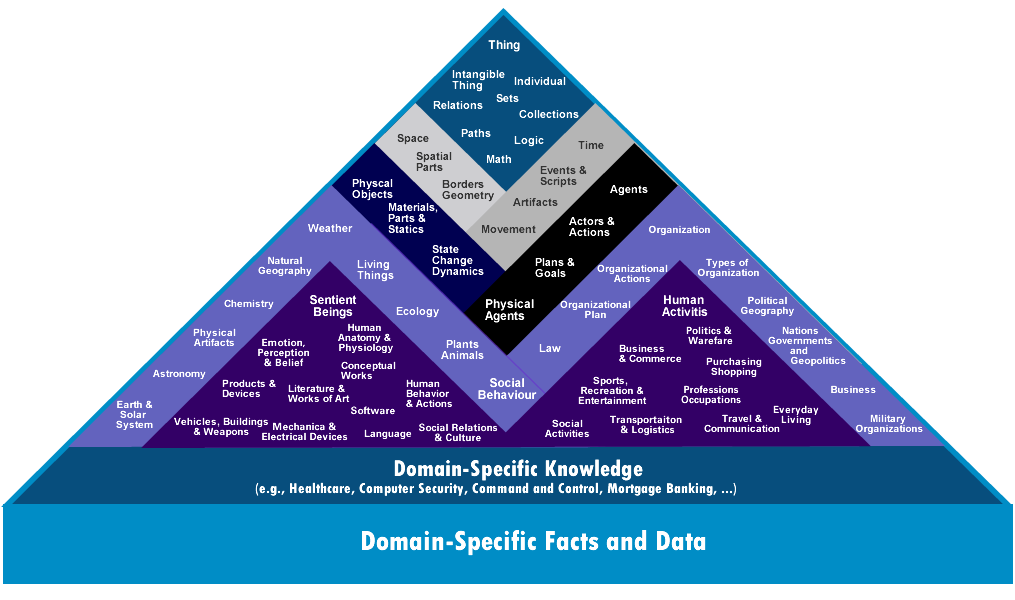 Top levels of the Cyc Model

But reasoning over ontology largely still assumes that knowledge can be explicitly represented and relies on deductive logic, so the two are something of a package. This knowledge representation hypothesis has often been criticised:

Think of the truism that someone possessed only of "book knowledge" of a given subject matter, especially one far from common sense and experience, is liable to reach spectacularly dumb conclusions - Smith, quoted in Sowa, op.cit.

In your case, this is quite like someone making a bird identification that best fits a book description but is far rarer than a similar species with a slightly worse match on e.g. colour.

An alternative approach is that of reasoning by analogy where there is no central explicit theory but reasoning is from cases instead. (Sowa, 2000). Sowa also draws attention to Wittgenstein's family resemblance and Waismann's open texture that highlight the approximate nature of any classification system. This is the philosophical underpinning of fuzzy logic, statistical/Bayesian and non-monotonic approaches to knowledge representation. Such approaches uses defaults, probabilities and heuristics to deal with new cases and missing information.

Not the answer you're looking for? Browse other questions tagged epistemology knowledge knowledge-representation or ask your own question.

4
What is the difference between Ontology and Knowledge Representation (KR)?

5
What is the difference between mathematical knowledge and other knowledge?
9
To what extent does our knowledge derive from the senses?
3
Are passive observation and active experimentation the only ways of knowledge production?
11
Do machine learning algorithms have knowledge (if not justified true beliefs)?
16
Are there any philosophers that argued for knowledge having intrinsic value?
7
How does Epistemology show that it's not a language game?
1
What is it about the existence of some things that makes us right or wrong in describing their existence, while other things can change?
0
Do philosophers think physical laws are logical statements?