In formal logic, how is it possible for an argument with a contradictory conclusion to be valid?

I've recently been trying to introduce myself to formal logic, and I've hit a stumbling point:

In the text I'm reading, a valid argument is defined as "an argument in which it is impossible for the premises to be true and at the same time the conclusion false."

I just can't wrap my head around this one.

Validity of arguments is best checked with abstraction. Consider for example2:

This argument is valid; it follows from the Modus Ponens. If the premises are true, we know for sure that the conclusion is true (this is the definition of validity of an argument; see above).

This argument is valid since it has the same form as the abstract argument above. However, as it turns out, it's not raining (the second premise is false). Moreover, I am not eating a cat at this moment. Hence, the conclusion is false while the argument is valid3.

Validity is often confused with soundness:

An argument is sound if and only if

At this point, please rethink your answer to the textbook question. When you've made your mind up, hover your mouse here:

Your argument is not a valid argument. The conclusion does not logically follow from the premises. For example, if grass is not green and water is not wet, then this does not tells us anything about whether it's raining or not. However, if you also have as premises that grass is green and water is wet, then, yes.

I'm going to start with a short answer.

An argument is invalid if it takes a form where the premises are true whilst the conclusion is false.

Take Modus Ponens as an example:

Is it possible to construct an argument which follows the above logical form, but has true premises whilst the conclusion is false?

If the premise were true, then the conclusion would be true and the argument would be valid.

But what if our premise was actually false?

For example, what if X was actually a triangle?

If X is a triangle is true, then the conclusion is also false. We would therefore have a false premise which leads to a false conclusion.

Let's define two terms, of which only one term is directly relevant to the question at hand:

Tautology: something that is true in all possible worlds.

Contradiction : something that is false in all possible worlds.

So, if we have a conclusion that is false in all possible worlds, the argument would only be valid if we have premises that entail the truth of the conclusion if the premises were true. Here is an example (Modus Ponens):

If the grass is green then I will be happy and not happy.

The grass is green.

Therefore, I will be happy and not happy.

This conclusion is clearly contradictory. The argument is valid however, since it follows a valid form of reasoning (MP). If the premises were true, the conclusion would be true. Remember that validity isn't concerned with the actual truth of the premises.

The general principle here is that if an assumption leads to a contradiction, then that assumption is false.

R = It is raining

We can then infer R & ~R obtaining a contradiction as you suggest. A valid argument so far, but we can continue.

(Can also be verified with a truth table.)

Sure, just use modus ponens:

This argument has the right form, so it is valid, but has a contradictory conclusion ( feel free to pick your own contradiction ).

I also struggled with this..it’s from the open source logic textbook forallx..after contemplating it

An argument is invalid if

A contradiction is any sentence that must be logically false. Eg

It is raining AND it is not raining

This sentence is made up of 2 sentences

A: it is raining

B: it is not raining

One has to be false.

Since a contradiction has to be made up by at least one false premise, it can’t be made up of premises that are all true. Therefore it can’t be invalid, so it must be a valid argument.

I would appreciate wiser minds commenting on this.

The OP has been given the following challenge: 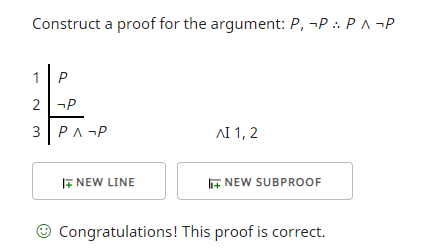 Note that the conclusion, "P∧¬P", is a contradiction but the inference rule, conjunction introduction (∧I) is used correctly. Since the argument from the premises is valid, this would be a simple example of a valid argument with a contradiction as a conclusion.

The OP also provides an example: 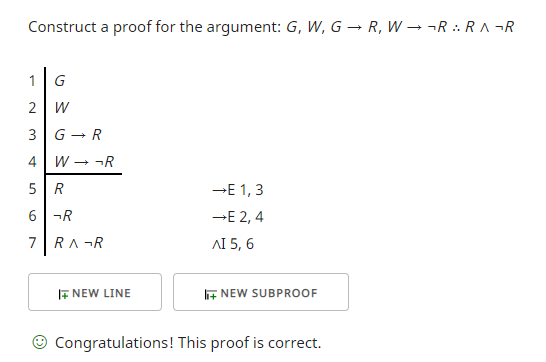 So this example would also work as a valid argument with a contradiction as a conclusion. To make this argument clearer, one could add to the premises two assumptions: (1) "grass is green" and (2) "water is wet".

The following section addresses a concern raised in the comments.

The proofs (derivations) above are considered "syntactically valid" according to forallx, page 147. If I used truth tables I could also show they are "semantically valid". Since the truth-functional proof system is "sound" (see Chapter 20 of forallx), these derivations of arguments are not invalid by truth tables.

To illustrate this using the second derivation, the following truth table shows that this sentence, "((G ∧ (W ∧ ((G → R) ∧ (W → ¬R)))) → (R ∧ ¬R))", is a tautology, that is, it is true for all valuations of the atomic sentences, "G", "R" and "W". Note that the premises of the derivation above are conjuncts of the antecedent of this conditional sentence.

Here is a truth table generated by the Stanford Truth Table tool: 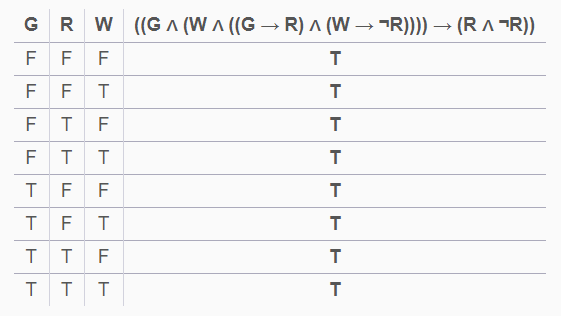 I can think of an example that shows the case:

The conclusion is always false (not (P => P)), therefore a contradiction.

And if the premises were true (which they are not, but that is ok - we are checking for validity, not soundness), the conclusion had to be true.

If you replace the second P for Q in both places and check the truth table you would see that they are logically equivalent and if P=1 and Q=0 shows that the premises are true and the conclusion has to be true, therefore a valid argument.

4
Validity of an argument with a contradictory conclusion

4
Validity stemming from contradictory premisses
1
The validity of the definition of a valid argument
6
What is the nature of "validity" in deduction when dealing with conclusions unrelated to premises?
1
Formalizing negations
1
Modus Ponens as Substitute for Syllogism
2
Is this argument about abortion being both right and wrong valid or invalid?