I am having difficulty in formally proving a simple argument. Consider

It is easy to see that the argument is indeed valid, but I cannot seem to prove it formally. Here is one attempt:

I am obviously stuck on a basic proof, and I would appreciate any pointers. I am used to the Fitch style notation and make use of an application called 'Fitch' to do formal proofs, so I would appreciate guidance in the parlance of Fitch.

A summary of the rules can be found here.

Here is a proof that uses disjunctive syllogism. As a proof this also illustrates that one has to follow the rules for well-formed statements built into whatever proof checker one is using so it can generate an answer.

The proof checker I am using is not the same one the OP is using. This may introduce other differences. For example, I could not use notation such as "P(x)", but I had to use "Px". 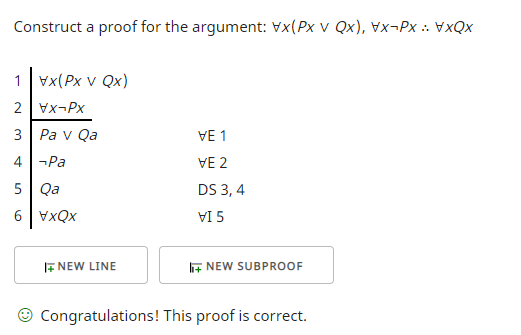 Using truth-function logic this would be simpler: 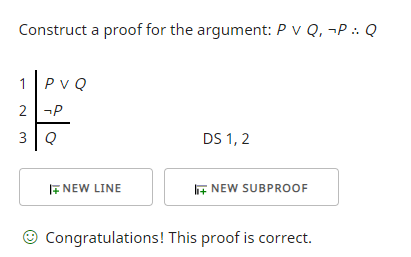 Not the answer you're looking for? Browse other questions tagged logic symbolic-logic fitch or ask your own question.

4
Disjunctive Syllogism in a Fitch Style System
2
Conditional disjunction equivalence proof using FItch
2
How do I apply existential elimination to the following Fitch proof?
1
Disjunction elimination proof
4
Proof Using Model Universe
0
Logic Question in a fitch style system - disjunction elimination
0
When can I discharge an assumption? or better put, When can I not discharge an assumption?
1
How to formally prove using first-order set theory that {7,8,9}={7,8,10} is a false statement?