Identifying a specific fallacy in the “Primitive Amazon” meme

So basically I came through this fallacious argument/image: 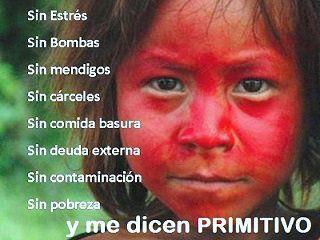 The thing is that (without trying to be racist), this native from the Amazon could well be primitive, since none of the previous statements proves that he/she is not.

After a lot of research I came through the "argument from fallacy" as the best choice for this fallacy, but I'm not 100% sure. Am I wrong or not?

I believe the fallacy in your example is a specific form of a non sequitur, defined as:

An argument in which its conclusion does not follow from its premises.

Now, as pointed out by stoicfury, a non sequitur is merely an umbrella term encompassing many logical fallacies. The term you may be looking for is Ignoratio Elenchi, which is specifically:

The informal fallacy of presenting an argument that may in itself be valid, but does not address the issue in question.

Which is exactly what your example is: a long set of premises about the native people, all quite believable but irrelevant to the question of what is or is not "primitive" (which is itself only an implied argument - there is no explicit logical argument in the image). The argument in the list of "without" terms is that the native people do not have many of the problems of the industrialized world; this is true, but it only allows one to reach a conclusion along the lines of:

The native people do not have many of the problems we experience in the industrialized and modern world.

But, given the most relevant definition of primitive as:

The premises do not allow one to argue that the natives are not primitive. The list of premises is entirely irrelevant to its conclusion, and so the argument contains the fallacy Ignoratio Elenchi. The only way the argument could avoid being fallacious is:

However, as you point out, 1 is not the case; those attributes are (by the general definition) irrelevant to what is or is not primitive. Thus, the argument does indeed contain a fallacy, an Ignoratio Elenchi.

I would argue that the image referenced simply cannot be classified as a argument, but is a figure of speech. (Beware, I am not implying here that arguments can't be employed as or in figures of speech; my point is that not every figure of speech gives an argument.) It is therefore a matter of rhetorical/semiotic analysis and not of logic to understand what the picture is trying to convey. Linguistics has a whole field of study devoted to such questions.

It works in the following way:

As you can see, the image-text works mostly by playing with dictionary definitions, rhetorical suggestions and expected anticipations on the part of the audience/reader. The only factual point being made seems to me (5), which is an empirical research question in anthropology.

The "argument" presented is saying that her people are not primitive simply because they lack those things. This is a valid or invalid form depending on how you fill in the hidden premises, and potentially true if being primitive is defined by those listed items (thus, if her people are without those things, then they are not primitive). But this is silly nonetheless because it merely comes down to what people define as "primitive" and I doubt the photo was meant to be some super-serious argument.

If this is the whole argument:

Then it is valid. Basic Modus tollens

If this is the whole argument (this is what it really seems to be countering):

Then it is invalid. The conclusion simply doesn't follow from the premises.

The argument you quote is not a syllogism; it hinges upon an unstated proposition, which is the definition of the word "primitive." We'd need to supply this missing bit in order to turn it into a formal argument.

Therefore, the determination of whether or not the derived argument is fallacious is going to depend on how we define the key term.

One could claim that the so-called argument is clearly rhetorical and not logical, and that it therefore relies on an appeal to emotion-- but to do requires that one has already made a determination regarding what defines a "primitive" in this context.

8
What is the difference between a formal fallacy and an informal fallacy?
1
Identifying logical fallacy in argument
2
What fallacy dismisses problems by making it specific to the critic?
1
Difference between “Base Rate Fallacy” and “Confusion of the Inverse Fallacy”
2
Fallacy of the arbitrary threshold?
2
What is the fallacy when someone refuses to be specific
1
Why is the anecdotal fallacy a fallacy?
1
Is the golden hammer fallacy a real fallacy?
2
If this is a logical fallacy, does it have a specific name?
1
How is this specific type of argumentation called, is it a fallacy?