Is it defensible to offend a group of people when they cling to horrendous ideas?

Several organized or semi-organized groups of people in the world have really horrendous ideas, and react disproportionally strongly to any critique. I think most readers can agree with that statement, although we might disagree about which groups constitute examples of this. My set of such groups currently include militant Islamists like ISIS, the far right and far left political fringes in the West, the fanatically pro-Israeli (who tend to label any criticism as anti-Semitic), the fanatic Palestinians, and, yes, the typical modern day philosophers who, according to highly respected philosopher John Searle, make a living producing a lot of (quote) (1)“nonsense”.

Now my general approach to such groups is to not accept or bow to their rules. 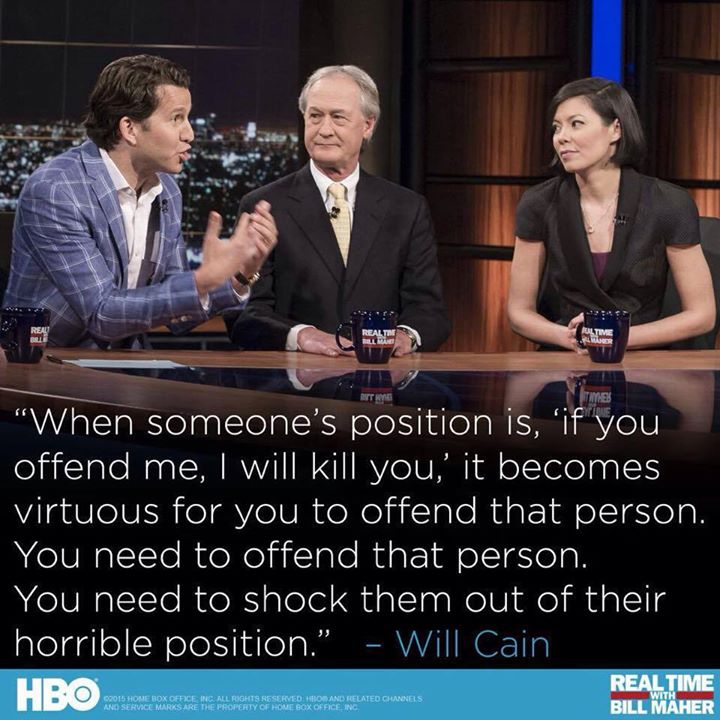 E.g. I don't accept that criticism of Israel is criticism of Jews or is anti-Semitic. And e.g. I don't accept that one should discourage people from drawing caricatures of Mohammed. And in particular I don't accept that one should refrain from calling a spade a spade when it comes to nonsense philosophy . For example, I think it's right and necessary to dismiss Kurt Gödel's proof of the Christian faith's god as nonsense (it can be applied to any other incompatible god), and idiotic nonsense at that, but that doesn't mean that it would be right to say that Gödel, a mathematical genius if there ever was one, was dumb or idiotic. Geniuses can maintain idiotic things, and as I see it, I should not be so afraid of being labeled this and that that I should in any way refrain from treating the idiotic nonsense with the simple lack of respect that it does deserve, while treating the man with the enormous respect that he truly deserves (in particular for his completeness theorems, and his incompleteness theorems).

Of course, in the case of groups such as ISIS, the individual persons will probably not deserve any respect; I'm not dogmatic about respecting people.

I guess that there must be some established philosophy about this, and I guess that I would have to go in that direction in order to frame a useful question that can be simply answered, instead of as in philosophy, discussed.

So, tentatively I'm asking if the approach outlined about is morally defensible?

1) John Searle: “I don’t read much philosophy, it upsets me when I read the nonsense written by my contemporaries”, in an interview with New Philosopher Jan 25th 2014.

ethics metaphilosophy
Share
Improve this question
asked May 15 '15 at 17:16

I'd say, preventively, that freedom of speech is something that applies to silence also. You should be free to not manifest about something. It is typical of fascist regimes to capture free speech by first capturing free silence. That's an old trap, and we must always be vigilant to avoid falling in it.

To answer your question more directly: your definition of "horrendous" is casuistic (and that does not mean I disagree, neither that I agree with it). For some concrete line of action to be defensible (ethically), it is enough that it can be aptly defended. That some concrete attitude is "defensible" doesn't take away one iota of responsability from the agent. Also, the ethics of concrete action ("is it right to do x?") is normally the subject of law scholars or ideologues, not philosophers.

Additionally, I'd say that there can be efficacy in not acting, as there can be in acting. Political action is, first of all, strategy. Tactics comes in a distant second place.

Not the answer you're looking for? Browse other questions tagged ethics metaphilosophy or ask your own question.

32
Does humanism's rejection of God necesitate relativism?
5
What are the consequences of withholding new knowledge?
8
How does Darwin's Theory of Evolution complicate a reading of Kant's Groundwork for the Metaphysic of Morals?
10
What are the Moral Sentiments of Capitalism according to Adam Smith?
3
What does “non-philosophy” mean in the works of Laruelle (and scholars of Laruelle)?
0
Has atheism answered this criticism of the moral philosophy “do as you would be done by”?
4
Implication of Rorty's concession to Ramberg that true statements “get things right”?
0
Are nations immoral?
4
How to explain value and goodness of things without resorting to Hedonism?