[Premise 2:] Most people who ignore statistics of failure (designated as 'ignorers') are stupid.

[Conclusion:] Therefore, most people who start businesses are stupid.

I tried to depict the above, but my sketch below only supports the fallacy. Where are the problems? 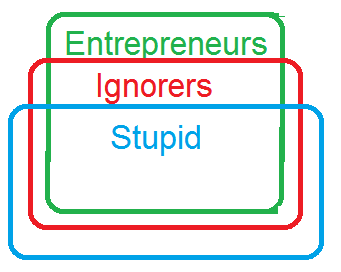 This is fallacious because we have no way of knowing the size of I. All we know from the premises is that most E are I and most I are S. For all we know, it could be the case that NO E are S.

This is confirmed by the premises, but by no means proved.

From the premises, you cannot conclude anything regarding the relationship between E and S as far as I know. It may be some, it may be most, it may be none, it may even be all; it's impossible to tell. 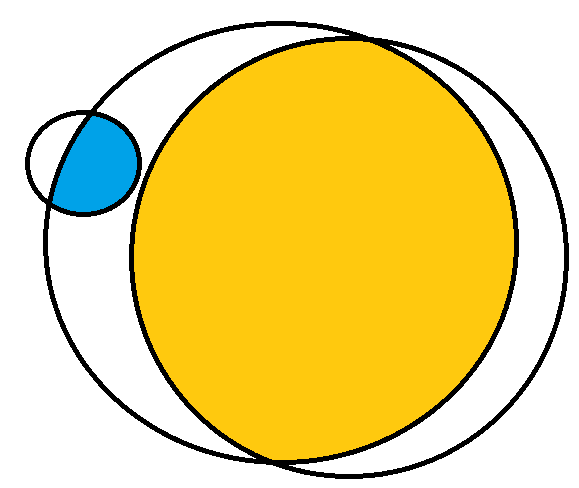 I know this won't be the most typical approach to the matter, but I'll do from a probability (therefore mostly mathematical) point of view.

In order to be clearer, let E be being entrepeneur, I be being an ignorer and S be being stupid

Note: P( A | B ) means probability of A being true provided B is

Now, lets imagine this scenario (where P1 and P2 are true)

Which is that scenario? It's simply a scenario where everybody that's E and S is also I, which wouldn't contradict neither P1 nor P2.

So, since we found a case where P1 and P2 are true, but C is false, we had demonstrated that the reasoning behind is fallacious.

0
What is fallacious about 4 consecutive uses of modus ponens?
1
Fallacy: L is almost always wrong. D is L. So D is almost always wrong
0
What is fallacious? 'Some things exist though no one thinks of them. So reality exceeds the mind's reach.'
3
Is there a suppressed premise in Anselm's Ontological Argument?
6
Logical fallacy of assuming people are stupid
0
Are these examples Affirming the consequent fallacy?
3
Fallacy identification
1
Why is the anecdotal fallacy a fallacy?
2
Is this a fallacy? (Assuming some unusual events are common)