What's the logical fallacy called when people somehow equate the rate of something to the actual value of something? 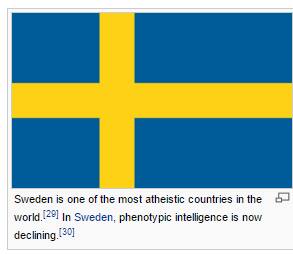 On the same page, the title also shows this fallacy (title page below).

. It's like equating "rate of speed = acceleration" to speed.

I think this fallacy is used enough that there may be a name for it. Is there?

The primary fallacy here is suppressing the context, which is common enough, but does not seem to have a traditional name, even though, in our high-information environment, it is a staple of hyperbolic rhetoric, a la FOX News or liberal media who publish questionable academic 'proof'.

Although one could apply the notion of 'quoting out of context', what is being 'quoted' is statistics and not words, so the actual origin of the mismatch between context and presentation is somewhat obscured, and is easier to lose. I would suggest something like 'isolation from context' as a broader name for the statistical version of this fallacy.

The analysis you cite isolates one 'moment of change' from the more basic one on purpose. If Swedes were of average IQ, on average, this could be seen as something problematic. But they aren't: Kind of like the Norwegians of Lake Woebegone, all their children are above average. That is nice for them, but it probably comes at a cost.

When artificial boundaries are weakened, statistics undergo regression toward the mean. Get more normal in one way, and you will get more normal in others. You don't get to choose which ones. The false imputation of meaning to natural regression toward the mean often goes one step further: by focussing on these 'unforeseen consequences', you can impugn the logic behind the initial change without tallying its advantages, and mourn the loss of a destructive boundary.

(To digress a bit, that may be what is going on here, at another level -- low food prices are normal now, and they do reduce both the impact of religious charity (and thus the idea that religion has a point) and personal discipline. But who wants folks to starve so your children are scared into thinking straight? That is your job...

Of course the conservatives want us to see Church -> discipline -> IQ, and that requires another fallacy -- an argument from religious authority and anecdotal evidence over science. Alcoholics Anonymous aside, obesity and addiction historically have little to do with the kind of discipline church provides, for most people. The US has been more addictive than it is now (To the Americans: believe it or not), when it was quite a bit more religious (To the Europeans: believe it or not). Normal people voted for Prohibition for a reason. They were legitimately scared.)

But this kind of thing is really, really common way of abusing statistics, that goes way beyond attention to change while willfully ignoring absolute status.

An example unrelated to rates of change: Conservatives argued in the 80's and 90's, that homosexuals were richer than average, because on average those who were publicly reporting themselves as homosexuals had more accumulated wealth. (Therefore we should not spend extra money protecting them -- they can spend it themselves. Therefore they should be excluded from hate-crimes legislation, despite being a major target of hate crimes.)

This isolates the figure from its context, because it ignores the degree to which most homosexuality is hidden, for various reasons, primarily related to hate crimes. (But also to various government definitions of 'family', and economic sexism (and the sex difference in the frequency of bisexuality) keeping lesbians married to men more often than gay men remain married to women.)

You've outlined two separate logical fallacies: False cause, where two things that occur together are illegitimately assumed to have a direct causal connection, and false equivalence where one thing (acceleration) is substituted for something else that is only superficially similar (speed).

Some caveats: A false cause argument does not mean that a real causal relationship doesn't exist, it means that the debater has not done the work to establish that one exists, and is instead illegitimately leaning on the fact that the two things exist in the same place. Similarly, it's worth noting in your example that acceleration and speed do have a real and important relationship, it's just not one of equivalence. It's also worth noting that bad arguments never mean that the conclusion of those arguments is necessarily false, just that no actual support for the conclusion has been provided.

It isn't a logical fallacy.

What the two statements in your example do as a whole is to apply a rhetorical trick. Two statements are made (without any proof, so we don't know whether they are true or false, and one as you believe of there dubious value). The first is a statement that some people, depending on their prejudice, would think of as negative behaviour, and the second is one that most people would think of as negative. The reader is intended to draw the conclusion that the first implies the second, and is further intended to draw the conclusion that the behaviour in the first statement (being an atheist) should be avoided.

That of course is a pure trick and absolute nonsense. There is absolutely no reason to believe that both statements are in any way related. I might as well say "1. Sweden is cold in the winter. 2. IQs in Sweden are dropping." and then we all conclude that Swedes should spend their winters in a warmer climate. On the other hand, that trick means to author's conclusion cannot be refuted, because the author never actually drew a conclusion but relied on the reader to make it.

0
What is this type of logical fallacy called?
12
Is Galileo's argument about falling bodies logically flawed?
0
Is this an instance of the base-rate fallacy?
1
Why did Aristotle describe as Extremes: the Major Term and Minor Term?
3
Is it a fallacy to argue or morally judge by treating earlier and later times as if in the same present?
0
Logical Fallacy for implied causality?
0
What's the fallacy when someone asks a question and then answers it themselves?
1
What's the logical fallacy here?
3
What fallacy is this? Ignoring rate of change