I came across this image relating calculus to happiness. 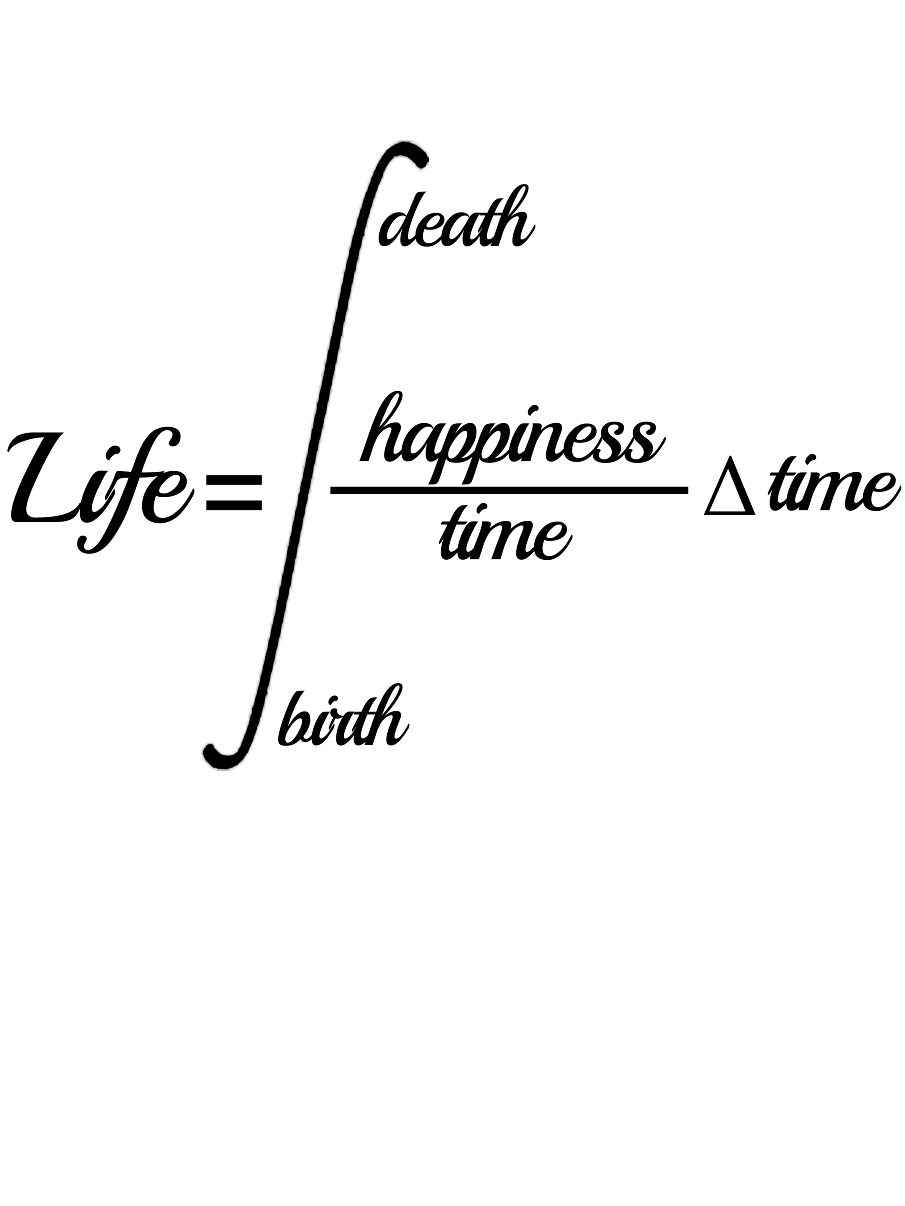 It's obviously not meant to be particularly serious, but I was nevertheless inclined to give it some thought. The integral concept in mathematics essentially defines the net accumulation of a changing quantity, and (act) utilitarianism in ethics holds that the action that maximizes the net utility is the (relatively) moral one. It seems natural to me therefore to relate integral calculus to utilitarianism.

For example, define a set of functions to be the "happiness" of different living sentient beings (with each function corresponding to each being) which can be directly (or indirectly[ 1 ]--I don't know how these things are dealt with in utilitarian ethics) attributed to some action at some time t as a function of time. The sign distinguishes pleasure from suffering. The "bounds" of the integral for each function can be from zero--which we can define to be when the action starts--to the death of the sentient being. Sum up the integrals for each sentient being, and you have essentially quantified the "morality" of a particular action. One action can be said to be "relatively moral" to another if it has the greater integral. In fact, that set can include all sentient beings--unaffected ones would simply have an integral of zero.

Does any of this make sense? Has it been studied? Of course, the niceties of my argument may be incorrect, but I was just curious in general whether or not mathematics, in particular integral calculus, can be used to model utilitarianism theoretically. Again, it seems natural, even though it can't really be applied.

[ 1 ]: As a side note, I would say that the "direct" and "indirect" affect issue is related to the Year and a Day rule in law. There is also the butterfly effect and "randomness". These, however, are more general issues I would reckon.

Why does it seem natural? Simply because of its phrasing as 'maximising the sum of human happiness'?

Consider, that a cup is the sum of all the molecules that make it up; this tells me nothing about cups.

A modern defence of utilitarian ethics is given in Rawls A theory of Justice; his 'foundational axiom' is the veil of ignorance.

In his brief outline of the main classical arguments of utilitarianism there is nothing there that can be construed as the integral calculus; but a more definite influence of Playos Republic is discernible.

And in the main body of the text there is nothing there either; nor any other kind of mathematics.

The implication with this model is that it's possible to know one's happiness at each point in time along the way. Consider one possible counter-argument offered by Herodotus: when Croesus asked Solon who was the happiest person in the world, Solon told the story of others who were happier than Croesus. When Croesus asked Solon why Solon did not consider Croesus the happiest, Solon responded that it was impossible to judge the happiness of one's life until it was at an end.

So, there is at least one different approach.

You are assuming that the utility of (say) a consumption path is the sum (or the integral) of instantaneous utilities. That is, you've assumed that utility is time-separable in the sense that there all cross-partial derivatives (with respect to different points in time) vanish. Economists frequently make this assumption, because it makes their models tractable, but it's hard to justify from first principles.

Not the answer you're looking for? Browse other questions tagged ethics utilitarianism or ask your own question.

38
Does happiness motivate every action?
3
How did Mill resolve tensions in Utilitarianism and Liberalism concerning the public/private distinction?
5
Has/can moral relativism be refuted and what are its implications for a true and useful ethical calculus?
4
Did Easterlin paradox and Scitovsky joyless economy disprove utilitarianism?
1
In utilitarianism, how to decide between two options that give equal happiness?
3
Why do we sum utilities, instead of aggregating in some other way?
1
Reconciling Utilitarianism and Rawls's Theory of Justice as Fairness
0
Is Utilitarianism based on Calculations or Calculus?