How to find redundant premises?

Suppose I have this simple argument:

Here's the truth table I made in an excel worksheet:

As you can see this comes out valid but in reality it isn't valid because 'R' has no use and doesn't take part in giving support to the conclusion.

Okay, this argument was maybe simple enough that you could easily see that 'R' was redundant.

But what if I get into a complex argument which has this sort of mistake? How can I logically infer that something was redundant without using much brain power to figure out this kind of mistake?

Regarding the statement from your question:

By definition, an argument is valid if the premises and our accepted working of logical rules create a situation such that if all of the premises are true, then the conclusion cannot be false. From the detail in your question I assume you are aware of this much.

Having redundant premises is not a problem. For example, I could make a simple argument:

This is perfectly valid (albeit trivial), and from that point of view there is nothing wrong with it. Introducing a premise that has nothing to do with the conclusion is not a sign of invalidity, but may be a sign that the argument has been lazily constructed (if the author does not realise that it is unrelated), that the argument has a secondary function other than proving the conclusion (an anecdote may contain evidence to a conclusion, but also contain irrelevant information to be entertaining at the same time), or because they are trying to underhandedly overcomplicate things or insert concepts that have no relevance in order to make the conclusion more palatable (see: politicians).

None of this makes the argument invalid as far as logic goes. You could, however, make the point that because of this the person is arguing poorly (or at least sub-optimally), but the abstraction of language to logic and argumentation as we teach in philosophy classes is not one-to-one with the usage of language in real life.

The only way I can see of doing this would be to create a truth table/tree/etc. and then by brute force check to see which premises have no effect on the truth-value of the conclusion. Then if you find such a premise, you know that it is redundant (and sometimes this happens entirely innocently, but because one of the premises e.g. becomes part of a larger tautology of which several of the components are not needed).

P.S. This is just speculation, but I suspect that this problem arises because of the assumption that if someone includes a statement in their argument, then they must believe that the statement lends logical support to its conclusion. This could actually lead to an interesting discussion about whether when we make an argument we are also creating a second logical argument in tandem that asserts that the logic used in the original holds water, and that both of these 'sub-arguments' need to give a true conclusion for the 'argument' as a whole to be 'acceptable'. This would be why we can attack an argument by attacking it's use of logic instead of simply trying to disprove its premises, and the statement "Premise A is relevant to the conclusion", "Premise B is relevant to the conclusion", etc. might be implicit (or not) in that tandem argument.

As you can see this comes out valid but in reality it isn't valid because 'R' has no use and doesn't take part in it.

This is wrong. An argument is valid iff if the premises of the argument are true, so is the conclusion. Equivalently, if there's no truth-value assignment on which the premises are true but the conclusion false. By inspecting your truth-table, you can see that this holds for your argument. The argument really is valid, and the use or non-use of 'R' has nothing to do with its validity.

What you're picking up on is the monotonicity of sentential logic. A logic is monotonic just in case if A |- C, then A, B |- C, for any B (pardon the formatting). What this means is that if you have a valid argument, you can add whatever additional premises you like and you'll still have a valid argument.

For more on this you can see here or here.

When Is an Axiom Necessary?

Sometimes, when we prove a mathematical theorem, every step in the proof seems to be somehow required by the theorem at hand. Other times, we look at a particular step with skepticism. Have we used a sledgehammer to drive a nail, applying a very strong theorem to a problem that could be solved with simpler means? Are the techniques used in the proof genuinely necessary to obtain the theorem at hand? This question is a central motivation of the field of reverse mathematics in mathematical logic.

It is not a mistake to have more premises than one needs. One simply doesn't use them in the derivation.

One way to reduce the number of premises, if possible, is to use a proof tree generator. First see if the argument is valid. If it is not valid then a countermodel will be provided. One may need more premises to prove the result. If it is valid then a tree will be generated with closed branches. Look for any premise that was not used by the tree. These may be able to be removed. Remove them and try to generate the tree again. If it can be generated then these premises were not necessary.

For example, consider the OP's argument:

Concatenate the premises with conjunctions as follows:

Make that the antecedent of a conditional and let Q be the consequent:

Put that in a proof tree generator, using the generator's required input syntax, to see if a tree or countermodel is generated. Using Tree Proof Generator, I get the following: 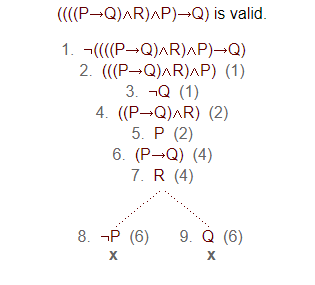 Note that R did not appear to be used in any branch. I will remove that next and see if the the result is still valid. Here is the result: 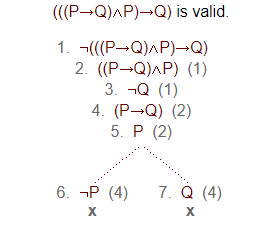 The result is still valid. So, I don't need R to derive Q. I can continue checking the remaining two premises. Here is the result from removing P:

This premise is necessary, so I put it back in and check the last premise (which will also generate a countermodel).

This provides a routine process to reduce the number of premises needed in an argument.

Not the answer you're looking for? Browse other questions tagged logic proof validity or ask your own question.

4
Is Vallicella's argument that the future tense cannot generate the Liar paradox valid?
12
Is Galileo's argument about falling bodies logically flawed?
1
How do you prove A <-> C given the following premises?
1
Someone said argument A, the other heard argument A', is that a fallacy?
5
What is the nature of proof in mathematics?
5
Is reduction to the absurdum to be considered a syllogism?
3
Why are conditionals and disjunctions “consistent with more possibilities than categorical propositions”?
3
How to find a stance towards a controversial topic
0
What's illogical in Justice Kagan's hypothetical with law clerks writing and editing memos?