What philosopher said that knowledge is about discerning differences?

I have heard that knowledge is discerning differences or to that effect. For example, if all things are the same such that there is no differentiating qualities, we can't really speak of anything interesting (think about pitch-dark environment). I was taken by it when I heard it the first time, and now and then I think about it and it seems so true in all respects from a particle to complex ideas. Where/whom does this idea come from?

You may be referring to the motto extracted from Spinoza: Omnis determinatio est negatio, every determination is negation. As applied to knowledge, it means that we know something by knowing what it is not, what it differs from. Spinoza's wording is not as succinct:

The one who transformed Spinoza's subordinate clause into a motto was none other than Hegel. In the Science of Logic he presented the "determinate negation" as the essence of his own dialectical method, and believed that Spinoza did not appreciate his own discovery: "Spinoza’s top-down determination starts with a single category (in his case, divine substance) that is then progressively divided by the application of concepts—the model being Plato’s method of division in which a genus concept is divided into particular species by the presence or absence of some differentiating property. From Hegel’s point of view, however, this cannot capture individuals as other than parts of that greater whole—a metaphysical picture in relation to Spinoza he refers to as acosmism". According to Hegel, notions proceed from abstract to (determinately) negative, to be resolved in the concrete, the negation of negation, their superior form. See more in Melamed's Spinoza and German Idealism.

An alternative is the French linguist Saussure's view that "in language there are only differences without positive terms... The entire mechanism of language, with which we shall be concerned later, is based on oppositions of this kind (e.g. between the word ‘father’ and ‘mother’) and on the phonic and conceptual differences that they imply". In other words, there is no intrinsic meaning to a concept as such, meaning is difference, concepts show themselves only in their differences from other concepts, "most precise characteristic is to be what the others are not". Derrida, an influential French continental philosopher, extended Saussure's view from language to philosophy, and came up with a neologism "différance", which fuses "difference" and "deferral". The word alludes to the indefinite deferral of "meaning beyond language", when meanings of words are invariably explained in terms of other words. "There is nothing outside the text", concludes Derrida, only the différance.

The idea of knowing as differentiating goes back to dialectical arguments of ancient Greece. Several of Plato's dialogues are structured as Socrates and his companions trying to clarify a notion of something through "definition by division", by successively discarding what it is not (piety in Euthyphro, bravery in Laches, virtue in Meno, and knowledge itself in Theaetetus). Aristotle later formalized it in his theory of definitions in terms of genus (kind) and differentia (special characteristics). E.g. humans are differentiated from animals by their capacity to reason, etc.

You may be looking for Bateson. 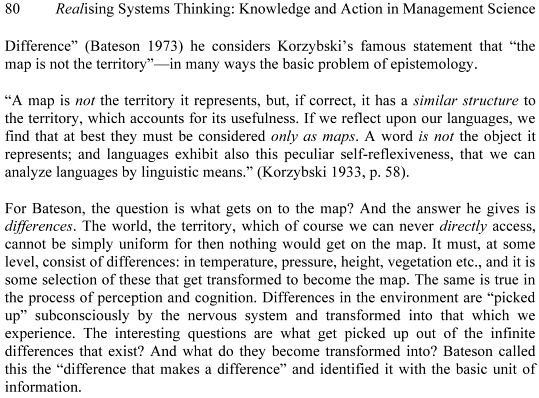 You say quite clearly : 'knowledge is discerning differences'. This reminds me of the distinction Wilhelm Windelband (1848-1915) drew between science and history. He drew a line between science, which looks for common patterns and general features, connectable ideally into lawlike regularities; and history, which focuses on the specific and the unique. For example, a political scientist might be interested in the features common to the French and Russian Revolutions (others as well) so as to generate a general theory of why and how revolutions happen. The historian on Windelband's contrasting view looks for the concrete and unique features of both revolutions; it's the differences that matter, not any similarities. (Wilhelm Windelband and Guy Oakes, 'History and Natural Science', History and Theory, Vol. 19, No. 2 (Feb., 1980), pp. 165-168.)

SPINOZA'S MAXIM IS METAPHYSICAL, NOT EPISTEMOLOGICAL

When Spinoza says, 'all determination is negation', he has nothing epistemological in mind. The point is that to be X is not to be Y. X as a determinate thing exists only to the extent that it is specificially not Y (or Z ...). When I say 'X is a dog', I 'negate' its being inanimate, I 'negate' its being a member of a different genus, of a different species. Every step towards further determination of its nature excludes progressively what it is not. Whatever this is, it is not an epistemological claim. It looks metaphysical - about the specification of reality and about what determinate reality consists in. (It has a distant parallel with Frege's ontological requirement for criteria of identity and individuation.)

When I read the quotation I was put in mind of Blaise Pascal's distinction between the 'spirit of geometry' and 'the spirit of finesse' in the Pensées (mid-17th century).

http://www.gutenberg.org/files/18269/18269-h/18269-h.htm. ('The difference between the mathematical and the intuitive mind'.) The 'intuitive mind' does not work with the direct force of the mathematical mind but sees numerous, subtle and unsystematisable factors at work, differing from situation to situation, and is happy to note differences without drawing conclusions from them.

Naturally Pascal would not say or hold that all knowledge is of this 'intuitive' kind'. The claims of mathematical knowledge are not to be denied, certainly not by so distinguished a mathematician as Pascal. [NB 'intuitive' strikes me as not a felicitous translation. Pascal contrasts the spirit of geometry (not mathematics tout court) with the spirit of 'finesse'; and 'finesse' avoids the ambiguous associations which have gathered around 'intuition' and 'the intuitive'.]

There is probably no absolutely definitive answer to this question. I have simply urged some matters that are to the point.

Not the answer you're looking for? Browse other questions tagged epistemology philosophy-of-language hegel derrida dialectic or ask your own question.

6
What is Hegelian dialectic of good and evil and how does it relate to binary opposition in structuralism?
1
Does life imply death or the other way around?
2
Can anything be described by describing what it is not?

19
Is there a parallel between Hegelian "essence" and Kantian "concept"?
3
How can a mathematician interested in the foundation of mathematics be satisfied by an always partial knowledge of the mathematics?
2
What is value of a philosphical argument/theory when a conclusion can never be reached?
7
What is an "unarticulated background"?
12
What is the meaning of "There are questions that science can't answer"?
2
How to deal with counterfactuals with false antecedents
1
Philosophy of beauty / Science
0
Epistemology and definition of Theory in Science