What exactly are the identity rules in logic?

In first order logic, I have read that there are a couple of identity rules.

The "basic" mathematical logic axioms for identity are :

Thus, from a = b we can derive b = a by simmetry, and from a=b and a=c, we derive c=a from the second one by symmetry and then, from c=a and a=b, we derive c=b by transitivity, followed by b=c by symmetry again.

I know that Mauro's answer is what you were looking for. However, in group theory, the term 'identity' has another meaning, which may be the one people coming here from search engines will be looking for. For example, in an additive group (that is, a set of numbers with the + operation; e.g. (N, +)), the identity is 0, because x + 0 = x, for every x.

Since → is not commutative, it can have both a left and a right identity. It has a left identity: T, because both T→T≡T and T→F≡F. However, it does not have a right identity because neither x=T nor x=F gives F→x≡F. Since (B, →) doesn't have a common identity, it isn't a group.

Here are the questions:

In first order logic, I have read that there are a couple of identity rules.

There are at least two rules for identity:

Yes, below is a proof using the two rules above, identity introduction (=I) and identity elimination (=E): 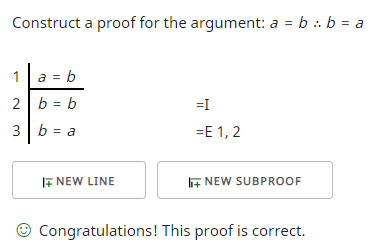 The second line can be added as a row without referencing any other line. The third referenced two lines: (1) the identity, "a=b", in line 1 and (2) the other line, "b=b", (which does not have to be an identity, but is in this case) in line 2. The second occurrence of "b" was substituted with "a" to get line 3.

Is it true one-way or both?

It is true both ways. One could extend the proof to show it is a biconditional using the same technique as above. 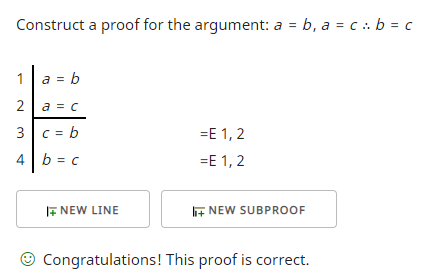 Not the answer you're looking for? Browse other questions tagged logic proof symbolic-logic or ask your own question.

7
What exactly is the value of completeness and decidability in logic?
4
What are the equivalent predicate logic inference rules?
5
Exactly what was Wittgenstein's argument against identity?
2
Need help with Rules of Identity for First Order Logic with Equality
3
Proof that the rules of logic are true
6
What exactly is a first-order logic?
0
What is the difference between these two types of proofs?