What name or label applies to a statement the very act of making which contradicts its truth?

This is not a fallacy, which is an argument incorrect by virtue of its form. But I am looking for a general term for self-defeating statements of the kind described.

A fallacy is the use of invalid or otherwise faulty reasoning for the construction of an argument.

However, in this case, there is no argument. Alice says something which we know is not true. Then if Alice had used an argument to argue "Bob is smart", that argument would probably have been fallacious. But the simple act of saying something untrue is not fallacious, because there is no reasoning involved.

Self-defeating-in-context sentences are not usually called fallacies, but they do have a name, contextually determined contradictions, or Moor sentences. They are closely related to the knowability paradox anticipated by Church, see Is it provable that epistemically possible (possible for all I know) does not imply possible?. A Moorean sentence if true renders any assertion of it false. Some examples are "I am not here now", "I am asleep" (disregarding talking sleepwalkers), "I am dead" (disregarding talking ghosts, vampires, zombies, and other such beings). The radical skeptical claim "nothing is true" is often interpreted as self-refuting, although what actual skeptics assert is more like a counterfactual "if there was such a thing as truth nothing would be true". Here is a more complicated example that plays a role in disputes between realists and anti-realists: "P is provable but hasn't been proved". To know that P is provable one needs a proof, but any proof of provability of P is convertible into a proof of P, so P has been proved.

Negations of Moorean sentences, contextually determined tautologies, are interesting beasts in their own right. Albeit controversially, they are examples of contingent tautologies, logically true but not necessary. "I am here now" is a tautology, but it could be otherwise, I could be surfing in Hawaii instead. "I am awake", "I am alive" display the same thing. Classically, logical tautologies were considered necessary, but some recent logicians admit contingent ones, see How can a tautology not be necessarily true?

It seems to me "self-undermining" in context is entailed in the very definition of "fallacy."

So the question might be: Is there a fallacy that does not refute or undermine itself? That would be, perhaps, a fallacy translated into a context that justifies it.

"All Cretans are liars," claimed by a Cretan, then repeated by an Ionian may be true or false, but no longer undermines itself.

"Smart" is a little ambiguous. It can imply intelligence, quick wit, a sharp sensation, neatness or just adequacy to occasion.

If she instead means something like "Bob has the youthful enthusiasm of an 18 year old" or "Bob is barely as mature as an 18 year old" then she is a poet and truth value is irrelevant - the listener can either agree or disagree with her opinion.

For an examination of how a statement can be "self-refuting" you might enjoy Professor John R. Searle's essay, "The Refutation of Relativism".

Not quite a fallacy, but I suspect that what you are referring to is reminiscent of the liar paradox:

This statement is false. 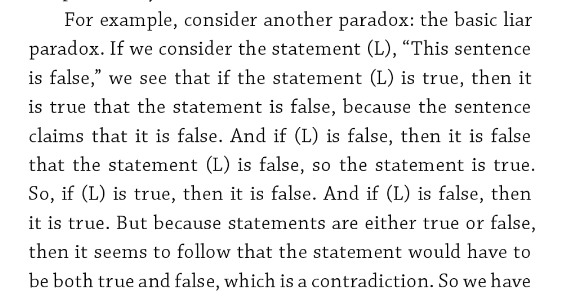 I agree with @Keelan's answer that the example in your post is not a fallacy.

There is the classical example of a Cretan saying: All Cretans are liars.

The characteristics of this type of example is stating a proposition, which refers to itself. As a consequence, such propositions have to be avoided.

You are referring to what are usually called 'self-refuting' statements.

These can be of different types :

This is a fallacy of peer (or group) pressure. Many other people think something - therefore it must be correct. Either because

Not the answer you're looking for? Browse other questions tagged logic fallacies paradox or ask your own question.

3
How can a tautology not be necessarily true?
4
Is it provable that epistemically possible (possible for all I know) does not imply possible?

26
What is the difference between a statement and a proposition?
6
What is the relation between a conditional sentence and the corresponding universal statement?
6
What is the status of the statement: "I am here now"?
2
relativism and russell's paradox
1
What's the name of this kind of fallacious proof to refute an idea?
2
Is accusing an opponent of committing any fallacy a red herring?
4
What's a name for the fallacy of concluding something must be based on truth because it is successful?
1
What is the name of this logical fallacy: Why should your god be the one?