In Aristotelian metaphysics, what are the constraints on what a thing can potentially be?

Aristotle distinguishes between actuality and potentiality.

If we take a bronze statue (the example at the Stanford Encyclopedia of Philosophy's Article on Aristotle and Causality), what is this statue actually and potentially?

Let's say it is potentially green, because after some time exposed to wind and weather, chemical reactions with the copper in the bronze will give rise to a green patina: 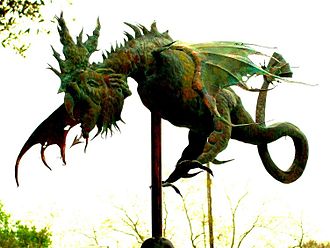 But is this statue potentially pink, too? After all, if somebody paints it pink, it will be pink. 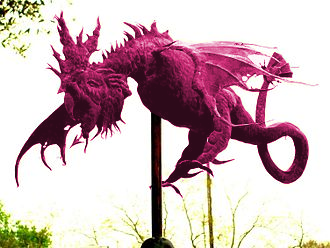 Lets say a mad scientists invents a device that can easily turn less valuable metals like copper and tin into gold. Also, this device can turn the tin/copper atoms into gold atoms "in place" (afaik there is nothing physically impossible about that). With such a device we could turn our bronze statue into a gold statue. So is our bronze statue potentially golden?

Now we can further ask if we melt the statue and make a giant plate out of it, is the statue potentially circular? Ok, that would destroy the statue (using the common-sense understanding of destroy. I have no idea how we define destroy rigorously), so maybe that doesn't work. But if we would allow even that, the statue is potentially nearly everything. With a device powerful enough we might even turn it into a living thing!

To sum it up, the question is:

In Aristotelian metaphysics, what are the constraints of what a thing can potentially be? If a thing is potentially X because it is not physically impossible to turn it into a thing with property X, potentiality seems to be a meaningless term.

There's several ways in which you're using potential and actual strikes me as very non-Aristotelian fashion in your question. To grasp what Aristotle is talking about with potential and actual, you need to recognize he's working on the problem of change and his resolution is to work from a concept of substance with properties and accidents. This contrasts to his representations of Heraclitus and (what sort of kind of seems like) Parmenides who advocate either that nothing has fixity or nothing changes respectively.

Now, we can turn to the SEP article and try to make sense of what it is saying. First off, it's not the article on potential and actual in Aristotle -- there are two better suited articles: Aristotle's metaphysics and Aristotle's natural philosophy. You may wish to look at those to better understand the issue.

If we want to speak of the potentials of the statue, then these are going to be the changes the statue could undergo and still be the same substance.

If we speak of potentials simpliciter, this could be anything.

Conversely, if you paint it green or blue or any other color, then it remains a bronze statue (there's a complex problem in this particular example in that Aristotle has a special treatment for artifact [human made things] -- so leaving aside any necessity of the color we see being bronze, it can work).

Thus, generically, there is a potential to change what a thing is, but that is not a potential of that thing.

Aristotle introduces the terms actuality and potentiality in order to address the question "What is change?" His answer is "Change is the actuality of the potential qua such".

You ask : In Aristotelian metaphysics, what are the constraints of what a thing can potentially be? Aristotle thinks that some actualities are incompatible with their corresponding potentialities. An obvious examples is "What is actually X cannot be potentially X". Therefore, viewed as a relation, potentiality is not reflexive. Similarly, it is not a symmetric relation since, if X is potentially Y, then it is not necessarily the case that Y is potentially X.

You further ask : " If a thing is potentially X because it is not physically impossible to turn it into a thing with property X, potentiality seems to be a meaningless term." Here, we might first note that it is one thing to possess potential, and another thing to actualise it. So potentiality is meaningful in the sense of witnessing change over time.

What is the use of the number one? I can use one pound to buy a newspaper, or I can drink a bottle of lemonade, or I can walk into a cafe; but this número uno - you can't see it, you can't sell it or buy it; it's an invisible nothingingness that has no meaning and no utility; an extension less pointless piece of sophistical nonsense...

Potentiality for A is a general term, as is actuality with respect to his theory of change, relative to his categories of what kinds of things there are.

This is why it looks like an empty term; in the same way that tautologies like x=x seem empty, but are useful all the same: generalities have to be reified into particularities.

nature is the subject of our enquiry, and nature is a principle of change ...

We can see that change is the actuality of that which change exists potentially...

When eventually, this is understood as not action at a distance, but action by contact, we have the concept of the field: Maxwells EM field, and then latterly Einsteins adoption of the concept for gravity.

This surely has been utility enough ...

Is it worth adding that the terms potential and kinetic are of Latin and Greek provenance; presumably we can take it that those who first theorised and thought through these terms - read the A to see what lies concealed there, and not over and above them - looking for refutations and objections.

Or, indeed scribbling red and green gargoyles on them.

Or, not knowing how to draw, coloured in or doodled over the letters in a pointlessly thoughtlessly way.

Or, now - in the merely now - by the pressing and pushing of buttons.

This being, the way of some.

Actuality and potentiality are one concept of Aristotle's ontology but not the only one. A second concept is the notion of substance (= ousia). The substance is that which does not change during the lifetime of an object.

In your example the substance is bronze statue. Besides giving its substance as the first category, the object has a set of further properties, e.g. some of the categories no. 2-10, see Aristotle: The Categories. 1b25-2a4. E.g., the colour determines the category qualification. The value of these further categories may change during the lifetime of the object in question. And this change is captured by the terms potentiality and actuality.

Aside, I admire your coloured figures :-)

It seems you are confusing primary matter with secondary matter.

"the statue is potentially nearly everything"

No, only primary matter can be "potentially nearly everything"—i.e., be united with a certain substantial form to form any possible substance.

"With a device powerful enough we might even turn it into a living thing!"

Here's an example of a substantial change: Na + Cl → NaCl

(image courtesy: William Wallace, O.P.'s The Modeling of Nature; cf. its review and the associated course)

the term "prime matter" is generally used to mean something which is in the genus of substance as a kind of potency, which is understood as excluding every species and form, and even as excluding privation, and yet is a potency capable of receiving both forms and privations; as Augustine makes clear in XII Confessiones [vii, viii, xv] and in I Super Genesi ad Litteram [xiv, xv], and the Philosopher in VII Metaphysica [3, 1029a 20].

Not the answer you're looking for? Browse other questions tagged metaphysics aristotle or ask your own question.

2
What exactly is the 'potential' that is actualized in Aristotelian metaphysics?