Why does the critical term correspond to the circle all shaded except for one area?

Any categorical syllogism that breaks one of the first four rules is invalid from the Aristotelian standpoint. However, if a syllogism breaks only Rule 5, it is valid from the Aristotelian standpoint on condition that the critical term denotes at least one existing thing. (The critical term is the term listed in the farthest right-hand column of the table of conditionally valid syllogistic forms presented in Section 5.1.)
[...]
In addition to consulting the table of conditionally valid forms, one way of identifying the critical term is to draw a Venn diagram. The critical term is the one that corresponds to the circle that is all shaded except for one area. In the case of two such circles, it is the one that corresponds to the Venn circle containing the circled X on which the conclusion depends.

What is the intuition behind the bolded assertion? Please do not answer with formal proofs or arguments. My drawing of Venn Diagrams for examples of syllogisms confirms the assertion above, but I still cannot intuit this in general. 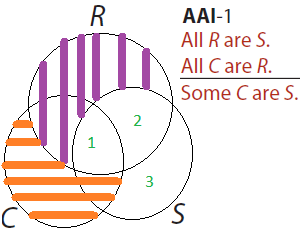 You have to recall the Existential fallacy.

If we have no Cs, the sentence "some C are S" is false : this is the Existential fallacy.

Thus, from the "modern" (Boolean) standpoint, the form is invalid.

From the Aristotelian standpoint, the syllogism is valid provided that the condition stated in Table Sect.5.1 [Figure 1 - schema AAI] is satisfied :

the subject of the conclusion (the minor term) exists [in your example : the "set of Cs" is not empty].

This is why C is the critical term : in order to avoid the Existential fallacy from the Aristotelian standpoint, you have to apply the schema to cases when the term C has "existential import" [see examples : "Some tigers are animals" versus "Some unicorns are animals".]

1
In a Venn Diagram, why does double shading of an area invalidate a syllogism?
5
What does the term "mathematical logic" mean?
1
Why did Aristotle describe as Extremes: the Major Term and Minor Term?
2
Why did Aristotle choose the terms 'Major Term' and 'Minor Term'?
0
Does rejecting the law of the excluded middle mean rejecting it for all propositions or only for those one cannot derive?
2
What Is Critical Thinking, and How Does One Go About Learning It?
7
What's the right term in logic for this phenomenon?
0
Why does a closed area represent a group of things in an Euler Diagram?