Source: A Concise Introduction to Logic (12 Ed, 2014) by Patrick Hurley

[p 456:] What is still needed, however, is a symbol to indicate that universal statements make an assertion about every member of the S class. This symbol is called the UQ. It is formed by placing a lowercase letter in parentheses, (x), and is translated as “for any x.” The letters that are allocated for forming the universal quantifier are the last three letters of the alphabet (x, y, z). These letters are called individual variables. They can stand for any item at random in the universe, and they have individual constants as substitution instances. 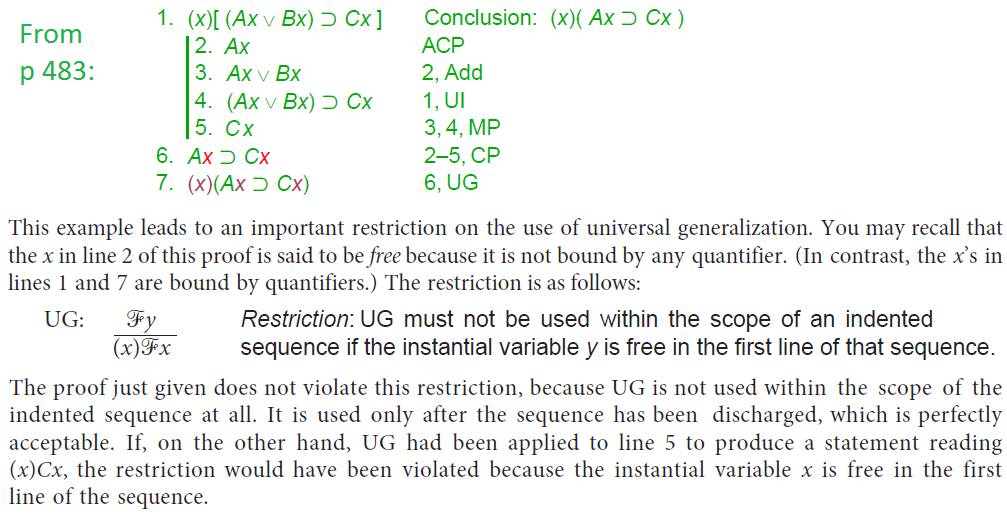 But I still do not comprehend why applying UG to 5 is erroneous. Per p 456 above, the same x is used in 5-7. Lacking any quantifiers, 5 and 6 refer to the same x.
To me, the UQ in 7 adds nothing new: the UQ states only that the x in 5 and 6 is true for all x.
But x is the only variable in this argument. So for all of what else can 5-6 be true?

have not the same "meaning".

9 is false if we interpret it in the "universe" of all men.

For 8, we have to note that a free variable acts as a "pronoun" of natural language, i.e. a FV denotes something only "in context".

The crucial notion for the interpretation of quantifiers and free variables is that of domain (or universe).

The same expression can be true in one domain and false in another one.

This is false, since 7 has a UQ over x, and not the previous lines. If you have a BV, by definition it is a dummy variable, which means that you can replace it with any other letter, say h.

Lacking any quantifiers, 5 and 6 refer to the same x.

For the proof from p 483 (coloured green) in your OP, you start you proof by replacing x with z for clarity ♦, with Az which means let some arbitrary z[=x], such that Az.
Then you apply your hypothesis 1 on this particular z [hypothesis which turns out to be a UQ involving Az, after you apply your hypothesis to your peculiar z, and somehow giving you Cz].
So you prove that with an arbitrary variable z, arbitrary to the point that you know nothing about it, but its membership to some fixed domain on which you can apply the hypothesis, fixed from the very beginning, you manage your way to Cz.

Then you can generalize that, since your z was arbitrary [but it must be in the universe of variables where your hypothesis holds], you have your desired conclusion involving the UQ over z, which can be replaced by a letter x, precisely because you wish to formulate the conclusion as a UQ (ie: to get rid of or to neutralize the ''peculiarity'' of the variable that you fixed from the very beginning, here z).
Finally, you replace formally your letter z with the letter x in stating ''for all x, you conclusion is written with an x''.

♦Authors from the universities love to confuse their readers; it permits them to see themselves as pedagogical --- without, of course, being so --- which is a crucial aspect of being meritorious since the enlightenment and the classical liberalism.

2
How do the antecedents of material and counterfactual conditionals differ?
1
How is inference with counterfactuals different than inference with material conditional statements?
1
How does a Statement Function 'make no definite assertion about anything'?
1
What 'certain liberties' inject meaning to Statement Functions?
1
For Universal Instantiation of a Variable, besides notation, does (x)ℱx differ from ℱy?
1
How to translate 'azaleas bloom if and only if they are fertilized' into symbolic logic?
3
Is it really problematic for Universal Instantiation to precede Existential Instantiation?
0
In Predicate Logic, for a Conditional Proof, why can you directly assume the Statement Function?
2
What is wrong with my intuition of Modus Tollens?
1
When does ℱx ≡ (x)ℱx ? What if x has the same domain in both?