What are the philosophical roots of the current American parenting style?

As a parent of two young children, I struggle with the current mainstream American parenting and educational style which is typically parodied (rightfully so) as the "Everyone gets a medal" approach to child rearing. Some features:

I can't really pinpoint one source. This is the overall message we get from both the various parenting books my wife makes me read and the daycare and education professionals I have to deal with. The approach is probably best summarized in this cartoon: 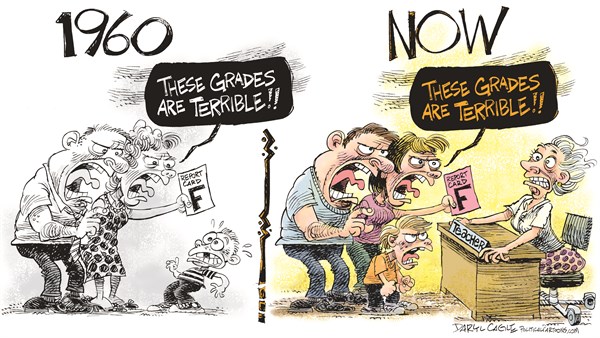 I call this "mainstream", because it is supposedly a mainly white/anglo approach (I myself am of mixed Irish and Arab descent). Amy Chua contrasts this with the more disciplinarian and traditional approach that Asian-Americans supposedly take with their kids in her notorious "Battle Hymn of the Tiger Mother".

I object to this approach and my friends are always surprised by this, since my political views are usually to the far left, and this school of parenting and education is somehow associated with liberal and left-leaning thinking.

Our original notion for parenting in the West was driven strongly by a focus on discipline and conformity. The child's 'spirit' was to be broken so that he would submit to guidance, and this accorded well with the notion 'Thy will, not mine, be done, O Lord.'

The modern approach then, generally seen as 'child-centered' rearing, starts from a clear reversal of those attitudes, and is (in dialectic style) an abject overreaction, even by the standards of its originators.

Three schools in this vein represent much of its philosophical base: John Dewey, Maria Montessori, and the Child Psychiatry movement initially within Freudianism, but later its continuation as part of Developmental Psychology within Clinical Psychology in general.

Dewey's concern was to move education away from indoctrination and make it what we would now call a 'feedback loop'. But this was transformed quickly into a focus on taking leadership from the child. Within his lifetime, Dewey had already had to start arguing against his followers on this point, but the less tempered form continued to have a strong effect on teaching.

Montessori's concern was to optimize the opportunities for growth in the child, instead of trying to create them. She pointed out how following cues from the child is much more efficient than trying to create focus artificially. Her motivations were very young children or children of low mental age, for whom traditional education was a bad fit. But efficiency is hardly the problem for an ordinary child. There is more than enough time and resources for us to grow up. Coverage of the range of things one should focus on becomes more of an issue. This is especially obvious when you step back from professional education, which consumes the time of highly trained people, to parenting, which involves huge tracts of time one can almost not manage to waste (although that is changing a bit in single-parent or double-income families, time is not really the issue).

Developmental Psychology points out some strangely non-intuitive aspects of learning that shocked folks, by looking at children who had serious problems being educated. They discovered complex interactions later simplified and proved by Behaviorists. Reward works better than punishment, so much so that absence of reward constitutes punishment, and overdone punishment can act as a reward. Unwanted behaviors naturally extinguish themselves when replaced by more usable alternatives, but do not respond directly to suppression by punishment if no better alternative serves the same unconscious function. Trauma has far deeper effects than we generally imagine. Interaction with principal figures matters a great deal less in substance, and more in form, than we knew -- it does not happen at the conscious level we might imagine, and it bleeds out into our overall patterns of interaction. (Brene Brown is kind of the modern spokesperson for these ideas. They are important, and she is great.)

As expressed abstractly, these things point us in a direction of less and less rigidity and reactivity in addressing children, and pressures parents to be more and more protective and gentle. But in practice, although true, they are somewhat self-contradictory, and they are overemphasized to the degree they were striking at the time.

The major impediment to using them abstractly is that some components of resilience are learned as much as any other skill, and untested skills are not well internalized. Nathaniel Branden, the original popularizer of the word 'self-esteem' spent much of his later life resisting the unbalanced notions that people had about the concept and the damage he felt was being done to education and parenting in his name.

The deepest problem, here, as I see it, is that like much of modern psychology, it originates in solving the problems of those at both extremes of accomplishment, rather than deriving direction from normal functioning. Other than Dewey himself, these workers generally tried to leverage successes with the disabled, or with those bored and disaffected by the weakness of the curriculum into a general plan that would be deployed mostly upon people far from either of those extremes.

At the same time, these are educational philosophies, aimed at educators, not parents, and the separation of teaching from parenting is lost by many practitioners who got their inspiration from wards of the State, or children who otherwise could gain little from their parents.

Not the answer you're looking for? Browse other questions tagged psychology sociology social-critique or ask your own question.

7
What are "entanglements" in "feminist philosophy"?
0
What are some discussions on the state of prison rehabilitation in the UK and globally?
0
Authors who think war and violence are part of the American culture and economy
2
What characteristics are generally considered traits for perfection?