What is the meaning of "using against the edifice the instruments or stones available in the house" in Derrida?

Can anyone help me with the meaning of this sentence?

"For Derrida deconstruction is "to attempt an exit and a deconstruction without changing terrain, by repeating what is implicit in the founding concepts and the original problematic, by using against the edifice the instruments or stones available in the house"

I found the following text in this regard too but it does not help much either: 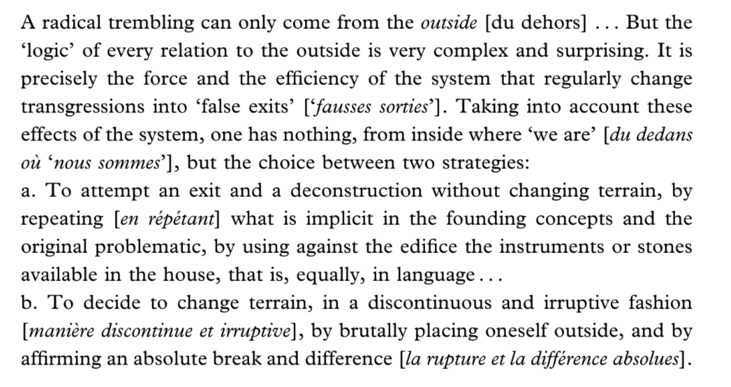 "Using against the edifice the instruments or stones available in the house" means developing or progressing a problem by analysis rather than contrarian argument.

For a simplistic example, in tacking the problematic stance: "God exists", the reactive contrarian argument is to (attempt to) grasp the opponent's concept and deny its existence with arguments from physics. In contrast, to deconstruct the problematic is use the tools at hand and ask what might be posited by the concepts "God" and/or "existence". A successful deconstruction moves the original problematic onto new terrain.

Not the answer you're looking for? Browse other questions tagged history-of-philosophy philosophy-of-language derrida or ask your own question.

5
How does Derrida explain the possibility of meaningful communication and linguistic coordination?
2
what is the exact meaning of bedeutung for Frege?
4
Where does Derrida say that deconstruction and the existence of or belief in God are incompatible?
4
Language as the house of being
3
Is there a word for 'language as the house of being'?
2
A question about the meaning of the term "metaphysics of presence"
1
What is the purpose of meaning?
3
On the meaning of "meaning"?
2
What is a counter argument for the proposition that reaching the truth involves abandoning language and other intellectual instruments?