How can opposing policies under the Particular-Universal Dualism still function well together?

Can someone please explain and demystify (make more intuitive) the paradox per 4? How can OPPOSED policies (separated by the green linese) still consist and harmonise with each other?

[1.] The relationship among the various sets of opposed policies discussed in the first section of the chapter may be diagrammed as follows: [Larger version here]. 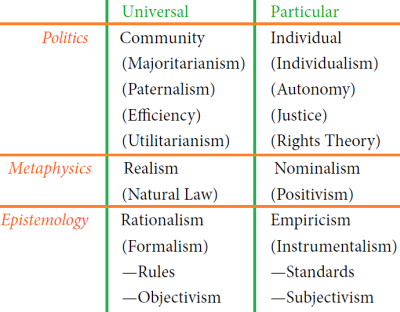 [1] I believe the primary point of the entire example is to demonstrate the necessity of not acting polemically. I am unsure what the policies that were alluded to in the first section. But based on you diagram, I see that the author lays out policies in three sectors; Politics, Metaphysics, and Epistemology.

Within each sector the policies favor one of two types of approaches or ways of thinking; "The Universal" (that which benefits the most people) and "The Particular" (that which favors each individual's benefit the most).

[2] Between the three sectors, the logical relationships of policies do not always coincide with the same "type of thinking".

1) Utilitarianism has the characteristics of calculating Utility using a quantitative analysis.

2) A key to determining things in a Utilitarian way would be to create metrics that set methods to represent what may be a qualitative or intangible attribute and quantify it.

3) An Instrumentalist inclination would benefit a Utilitarian because they could incorporate these intangibles into their metric.

[4] Therefore there is no strict Polemic position for looking at anything, because it requires you to contradict that position in another Sector. One can be neither All Universal or All Particular without relinquishing one item in at least one sector.

If one were to try and be completely polemic and only use those policies that focus on the Universal, they will inevitably need to sacrifice one position because they are not all compatible. If you cannot have Utilitarianism without Instrumentalism, then being strictly polemic is inherently flawed and will fail.

There is a difference between deriving from opposite points of view and actually being opposed.

One can decide killing is wrong from an instrumentalist, rights (both particular) point of view: each individual has a right to more power over the direction of his future than any other individual, and from a communitarian, utilitarian (both universal) point of view: if we are all afraid of being killed all the time, that will cut into our overall ability to enjoy life. These arguments are dual in some sense -- they capture the same intuition in different terms entirely, but there is no conflict.

In fact, in extreme cases, logical arguments that are stated in completely contrasting terms can not only not conflict, but can be identical.

Consider the ways in which mathematical or logical theories can be dual -- the logic of propositions and the theory of sets are dual to one another. They capture the idea of assigning properties to things and rigidly using those properties to combine the information about them. Everything is the same, but every statement is almost perfectly opposite.

It can be argued that in the same way these two theories are dual, there is a dual formulation of every logical theory that starts from an exactly complementary point of view.

Going back to the opening example, it captures this trend. It is almost impossible to motivate particularist rights and values theories from anything but our shared universal drives and wishes. And it is equally difficult to identify what drives and wishes may be shared, except through looking at the things to which people naturally take offense or extend appreciation -- the basic matter of defining rights and values.

The viewpoints are opposite, but never opposed: the implications can be expected to agree to the degree that they are dual representations of the same content.

(This is never perfect, even in math. The previous answer about the gaps and compromises between dual theories still applies. But I think it presumed this perspective, which was already lacking. So it was out of context.)

Not the answer you're looking for? Browse other questions tagged metaphysics philosophy-of-law or ask your own question.

10
How well did Aristotle feel his belief in the eternity of the universe was established?
4
One and many, particular and universal, individual and general… how do they relate?
12
How many angels can dance on the head of a pin?
3
How Can the Unobservable be Verified?
4
If the universe doesn't exist, can mind still exist?
1
Have philosophers speculated on how chaotic forces meeting together can result in order?