Is Dunn/Belnap's 4-valued system a product system (as a many valued logic)?

The description of Product systems in the SEP entry on Many-Valued Logic uses Dunn/Belnap's 4-valued system as an example of a product system:

In this way, the truth degrees of Dunn/Belnap's 4-valued system can be considered as evaluating two aspects of a state of affairs (SOA) related to a database:

Both aspects can use standard truth values for this evaluation.

(Edit: After reading Schiphol's answer, I can understand why it makes sense that negation leaves the degrees {⊥ , ⊤} and ∅ fixed for this interpretation. I even got the impression that "set values" model this "whether there is" type of information quite naturally.)

It seems to me that for this semantics, the negation should exchange the degrees {⊥ , ⊤} and ∅. However, in the description of Dunn/Belnap's 4-valued system in the same article a conflicting definition of negation is given:

A search with google seems to indicate that this is indeed the correct definition of negation for this system. But then, how can this system be a product system?

This means that, in order to apply negation to the different truth values, you apply it (classically) to each of its components:

EDIT: The above is how one can see that negation as suggested by Belnap and Dunn is reasonable. But I agree with the questioner that it is unclear that the logic, so described, is a product system.

A bit more detail on how to see Dunn/Belnap's system (DB henceforth) as a product system:

In DB we have four truth degrees:

What the author of the SEP article claims (Siegfried Gottwald, incidentally the author of a popular Treatise on Many-Valued Logics) is that BP can be profitably understood as a product system: we take BP's truth degrees as evaluating whether

a. There is positive information about the truth of the SOA.

b. There is positive information about the falsity of the SOA.

We can track these two aspects with an ordered duple: ; a will be true [t] iff there is positive information about the truth of the SOA, and false [f] otherwise. Mutatis mutandis for b. If so, there is the following mappings of BP truth degrees onto the ordered pairs (represented with square brackets and not the habitual corner brackets; mysteries of the SE markup) of our product system:

But, of course, if this is the intended mapping and, e.g., negation is to be calculated as classical negation over the two components, ~ ∅ is {⊤,⊥} and vice versa, as the question rightly claims.

Basically, yes, but the more commonly found term for that construction is bilattice following Ginsburg who saw the need to construct more complicated ones than Belnap's FOUR.

As M. Fitting more intuitively explains the definition (which he actually narrows a bit, but with respect to FOUR that doesn't matter) and the construction scheme:

Definition: By an interlaced bilattice we mean a set B together with two partial orderings, ⩽t and ⩽k, meeting the conditions:

There is a general and intuitively appealing method for constructing interlaced bilattices, due to Ginsberg. We describe it briefly.

Suppose C = (C, ⩽) and D = (D, ⩽) are complete lattices. (We use the same notation, ⩽, for both orderings, since context can determine which is meant.) Form the cartesian product C x D, and give it two orderings, ⩽t and ⩽k, as follows.

It's easy to see how FOUR is constructed that way from two copies of the two-element Boolean algebra 2, although the two copies have different (i.e. opposite) meanings assigned to their ⊥ and ⊤, as noted in that para.

The SEP article manages to make this construction slightly unclear because it flips the symbols of one of boolean algebras... which is fine by isomorphism and probably intended from the viewpoint of the "natural reading" of the output of the construction, but a wee bit confusing otherwise from the point of view of the construction.

Following the notation from Fitting, in the k-order the greatest element should be (⊤C, ⊤D) and in the t-ordering it should be (⊤C, ⊥D) obviously. The SEP page basically has this notation/identification in its diagrams: ⊤ = ⊤C = ⊥D and ⊥ = ⊥C = ⊤D, so instead of (⊤C, ⊤D) SEP writes {⊤, ⊥} and instead of (⊤C, ⊥D) SEP simply writes {⊤}. And perhaps the most confusing part is that SEP writes ∅ for (⊥C, ⊥D). Or more helpfully, I hope, as a "double Hasse" diagram with the SEP notation on the right-hand side of each node's label: 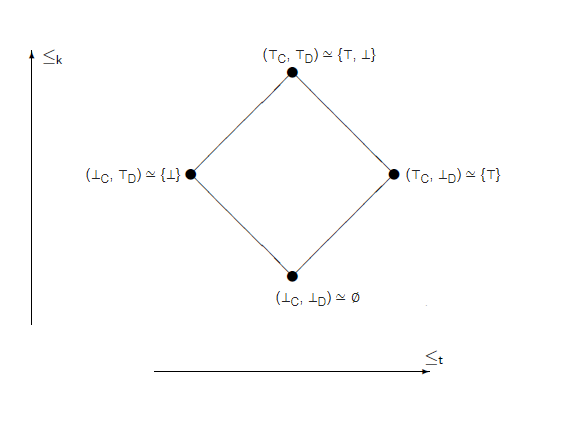 For an (intuitionistic) example where C and D are not the same, Fitting uses the open and closed sets of a topological space.

The difference between SEP/Gottwald's (k-tuples) product systems and (interlaced) bilattice as defined above is basically that Gottwald's construction doesn't include taking the inverse ordering on one of the lattices as part of his definition. That actually makes Gottwald's construction more general than interlaced bilattices, but he doesn't given any examples for k>2, so it's not clear if anyone found a use/application for those.

Ginsburg himself defined bilattice somewhat more generally, which allows some examples that aren't strict interlacingins like that. Basically, besides two (starting) complete lattice (instead of Fitting's condition 2) he introduces a negation (on the bilattice) that is defined as having the properties that

Because of this you can have different number of elements (in both dimensions) on the chains in the resulting "product" in Ginsberg's construction, e.g. 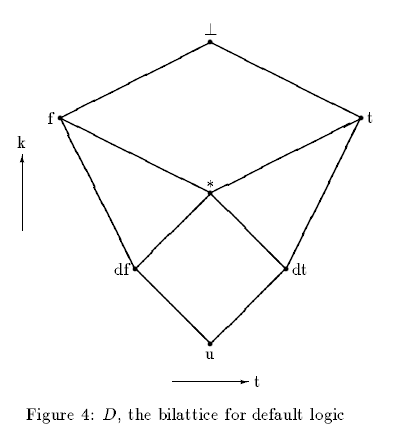 Ginsberg used the term "world-based" to refer to the construction that Fitting later called interlaced bilatices. Ginsberg also defines a notion of a balanced bilattice which is called so if there is a surjective bilattice homomorphism from a world-based bilattice (construction) to it. The bilattice in the figure above is not balanced (unlike FOUR).

3
Is there a “for dummies” construction of the valuation model of the relevance logic R from a De Morgan monoid?

6
Is Belnap's four-valued logic technically a relevance logic?
4
Is there a school of informal logic that treats it as determining how to transcribe arguments into formal logic?
5
Are there any strong reasons to still consider logical monism or a “One True Logic” in light of all the non-classical logics that have been developed?
1
Why is Truth the default designated value in logic and language?
6
Are there “partially explosive” logics?
2
Are there useful logics that reject disjunction introduction?
3
Classical propositional logic. Are all formulas sentences?
1
Is it logically permissible to neither believe nor disbelieve a proposition X? Or does this violate the law of excluded middle?
3
How do you work with a non-classical metatheory?
2
How can one formalize that an argument composed of a true and a false statement is “partly true”?