Dasein is or isn't responsible, isn't accountable: so what?

I was looking at this 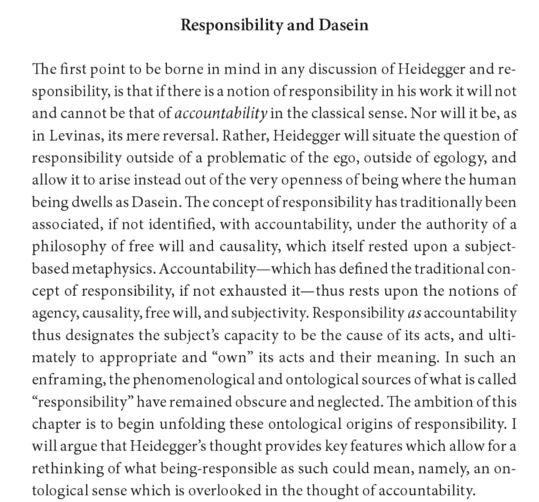 The Origins of Responsibility By François Raffoul

It's not immediately clear what it means to be responsible but not accountable. Is it just the very loud claim that Dasein's responsibility is robust, and immune to determinism etc.?

This only is the grand emancipation: that no one be made responsible any longer, that the mode of being be not traced back to a causa prima, that the world be not regarded as a unity, either as sensorium or as "spirit;" – it is only thereby that the innocence of becoming is again restored

And it's not immediately clear what it means to not hold yourself responsible for anything, without falling into passive nihilism.

What is being said here, either by Heidegger or Nietzsche? All I can think of is the idea, similar to Sartre's, that there is no responsibility without freedom.

To be responsible but not accountable is a very subtle distinction in most concepts of the word. But the difference is clearly defined in Heidegger's definition of Dasein, "This entity which each of us is himself…we shall denote by the term 'Dasein'". Since Dasein is being of and in accordance with its true self "Being-in-the-world", the responsibility is in acting in accordance with this self.

You are therefore not accountable to any rules or demands. You are acting naturally as you should and are taking into account nothing but what is encapsulated in the definition of a Dasein.

Accountability is instead an attribute of an object that is "ready-at-hand", because its purpose is ascribed to it. Since a Dasein has no externally assigned attributes or roles, Dasein is not accountable to anything but itself (and only in terms of being responsible to be itself).

4
What is the difference between Dasein and consciousness?
2
Can an entity like a car be Dasein?
5
Dasein and know thyself
2
Why didn't Heidegger take other kinds emotion as the deepest and original feeling of Dasein?
4
Heidegger's "Dasein" vs. Sartre's "Being for itself"
1
So what if the nature of Dasein is Being-in?