Did Wittgenstein think that pure description, without the influence of explanation, could be pursued?

Wittgenstein is stated as having said "we must do away with the explanation and description alone must take its place" (PI 109).

But isn't this akin to the myth of the given that Sellars attacked?

Can a clear distinction really be made between providing a description and providing an explanation?

Doesn't the one effectively permeate the other?

One example that comes to mind that seems to leave the two interconnected is the description of a banana being thrown in the air.

We might describe the situation as Jim throwing the banana, or causing the banana to be thrown, into the air.

But here the description of the event, namely Jim hurling the banana into the air, is inclusive of two events, the event of Jim with a banana in his hand, and the event of the little banana hurling through the air (probably much to its dissatisfaction).

But, in this way, there is the occurrence of an explanation of an event within the mere 'description' of an event, the explanation being the induction of causality.

Indeed, so long as there is a certain ambiguity in what single 'event' we might be offering a description of and in what circumstances we offer a description of it, it seems to be the case that any given event can give way to be an explanation just as much as it can a description.

As a last bit of inquiry, is Wittgenstein's criticisms of explanation (insofar as it is a criticism of 'private states of meaning' perverting what is simply observed of 'public behavior') similar in any way to Hume's criticism of induction?

Both seem to me to be criticizing a mental sort of behavior that impedes or contorts the naturalistic (or simply 'natural') experiences and observances made in our ordinary course of life.

I think you are over-interpreting and taking this more broadly than it is meant.

He is saying that if we want our understanding to be scientific, and shared, when we do Philosophy, we cannot use our own explanations as a source of meaning. They are hidden, and cannot become data. We should not explain, we should describe.

This has nothing to do with explanation or description as a phenomenon being real in a third-party sense. In the real operation of language games, as he comes to describe them, explanation (meaning) and description (use) hold an interlocking relationship that is very real, and he spends a lot of effort on clarifying this interaction. But he does so using the evidence of use.

So it would be silly to think he meant this globally, or he would be just not have written many later sections.

If you want to distinguish between description and explanation in Wittgenstein's sense, you have to consider his concept of the autonomy of grammar first.

Three features of the autonomy of grammar:

Now, after this is clear, it can be drawn a distinction between description and explanation. Descriptions belong to propositions of grammar and explanations belong to empirical propositions. Your example of "Jim and various things he's doing with his banana" belongs under empirical propositions and therefore can't be described in Wittgenstein's technical sense. In other words: you can't describe state of affairs only various uses of an expression (grammar of an expression). Great example of such task provides Hacker, one of the most distinguished Wittgenstein's scholars. Here I attached his surveyable representation of thinking - description of how we use the word thinking: 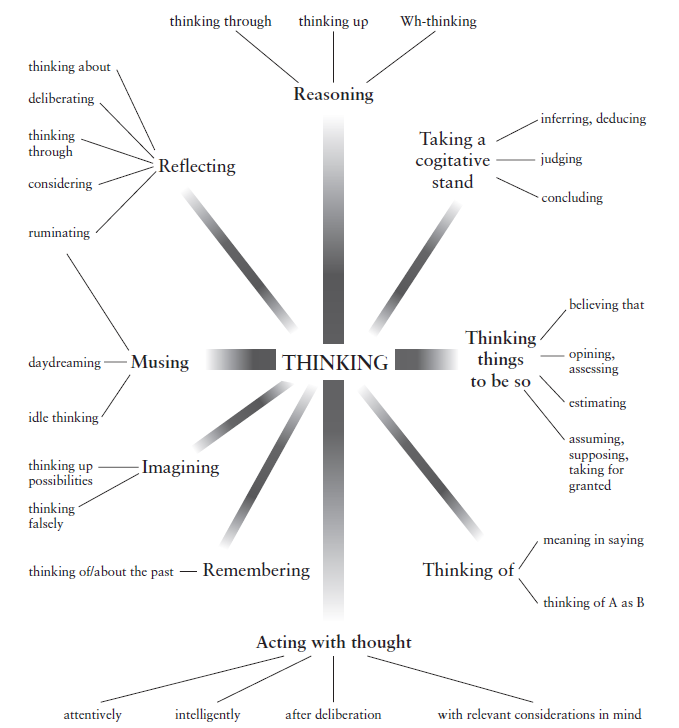 It is important distinction because it distinguishes philosophical investigation from scientific. Empirical sciences explain why or how something happens while philosophy only describes how a word is used.

And we [=who do philosophy] may not advance any kind of theory. There must not be anything hypothetical in our considerations. All explanation must disappear, and description alone must take its place. And this description gets its light, that is to say, its purpose a from the philosophical problems ... Philosophy is a struggle against the bewitchment of our understanding by the resources of our language.

Contrasting descriptions with explanations is just one more way in which Wittgenstein expresses one of the central theses of PI, which is in direct opposition with his earlier views: language games have no "depth", i.e. no deep, hidden structure. Nothing is hidden from (the common, public) view. There are no deep, underlying logical and/or rational structures, of the kind that he argued for in the Tractatus, behind language games. This is, then, the meaning of the assertion that there is nothing to explain, only something to describe. And it also turns out, so Wittgenstein repeatedly tells us, that these mere descriptions are not at all easy to produce.

Not the answer you're looking for? Browse other questions tagged wittgenstein or ask your own question.