Plato books for a philosophy newcomer

I watched a funny philosophy crash course on youtube, and I'm very curious about Plato. As a beginner, where should I start? Original work? Other author's books about his philosophy?

Original. As long as you are interested in a specific author, always the orignial (although for some there might be reading groups/seminars necessary, like Kant, Hegel, Foucault, etc. - but that is not the case for Plato!).

You may miss some subtleties (reading it several times over the course of two weeks helps), but it is still better than reading a possibly wrong interpretation and taking it for granted. That is, mostly an interpretation of a translation, which in itself is an interpretation. You get my point.

Another point: I assume you are not proficient in ancient Greek. Translations vary a lot in their quality. Reading it, you should always stick to sources that offer different possible meanings in their remarks instead of just one interpretation. Greek philosophers often included meaningful wordplays into their writings that may completely twist the meaning if translated badly. Remarks pointing them out from time to time are therefore a good indicator for an acceptable translation.

I agree strongly that Plato should be read directly, but I would suggest there are better and worse reading orders. Plato's work is often divided into three (or more) eras, although this is speculative. The first set is considered to be dialogs he wrote early. These are more open-ended, are considered to be truer to the historical Socrates, and typically end in "aporia" (i.e. with unresolved arguments). The middle era works more explicitly outline Plato's own original metaphysics, still in dialog form, and still for a general audience. The late dialogs are more complex and abstract, more for a specialized audience, and sometimes abandon the dialog format.

I would suggest starting with The Apology to get a look at the historical Socrates. The other early dialogs tend to be easy to read and understand, so those are good for getting your feet wet. I created my own rendition of the Ion, one of Plato's most humorous dialogs, you can read it, if you wish, here (it's a quick read). Then maybe a transitional dialog: I'm personally partial to the Meno, which is the one that first woke me up to Plato's genius. If you can see the hidden layers of meaning in that one it's a good key to understanding all the rest of Plato's work. Finally, you'll want to read the Republic and the Symposium, Plato's most famous writings. They are, without question, two of the great masterpieces of all philosophy, and quite good reads if you find a good translation. You might notice this leaves out all the late dialogs --those are really for hardcore Plato fans only. They are dense and hard to understand, so they probably shouldn't even be approached until you feel you've mastered the earlier ones.

As far as the Theory of the Forms in particular: In my read, the Forms are best seen as one of Plato's most memorable and often used metaphors for a deeper reality that he felt defied any single description. So in once sense, all of Plato's dialogs are about the Forms, in another sense, even those that appear to be about the Forms really aren't. With that said, the combination of Meno and Republic will give you a good overall feel for the Forms as they are most commonly understood.

Plato's Republic. Translated by G. M. A. Grube Revised by C. D. C. Reeve. Hackett Publishing. Note, you will find yourself reading the same paragraph 3 times. This book is akin to taking the Red pill. The cave allegory is legendary. 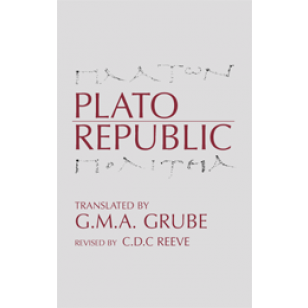 Here's as good a place to start with Plato as any: The Complete Works of Plato

normally I'd suggest skipping the introduction but you might find it worth reading some of the "Chronological vs. Thematic Groupings of the Platonic Dialogues" & "Translations" - otherwise, Njoy!

Just wanted to recommend Rebecca Goldstein's Plato at the Googleplex. She is very good at relating Plato's work to real-world situations.

I agree with the suggestion above that the Republic is the right starting point. I offer two reasons for this.

In the first place, the dialogue covers nearly all the topics that Plato takes up in other dialogues - ethics, politics, epistemology, metaphysics, logic, education, religion, aesthetics. No other single dialogue provides a wider - or anything like so wide a - conspectus of Plato's philosophical interests. The conspectus also has a broad coherence; the topics are not merely strewn together but inter-connect as the general argument of the dialogue proceeds. Plato also exhibits nearly all his literary philosophical styles : from the fiercely argumentative and not always fair (with Thrasymachus), to the tolerant and indulgent (with the aged Cephalus), from the conversationally expositive which Socrates mainly adopts towards Glaucon and Adeimantus to the use of myth, simile, analogy, and allegory in the later stages.

Secondly, the Republic is a sort of developmental philosophical marker. We can see what Plato writes before and after the Republic, from the rough chronological ordering of his dialogues which we have, as approaching the ideas an arguments of the Republic or receding and retreating from them and starting out afresh.

The best plan is just to read the Republic, maybe alongside a commentary but not with the commentary first and independently. A commentary used wrongly - taken first - will taint the purity of your intellectual purity of your vision. Some philosophers can scarcely be confronted without commentary in hand - Aristotle, Spinoza, Hegel, Heidegger, perhaps. But Plato is not like this. Learn from commentaries, but later. Any recent translation of the Republic will give reliable guidance on where to turn for commentary.

Not the answer you're looking for? Browse other questions tagged plato greeks or ask your own question.

2
Is it possible to deduce how much of Platos philosophy is original to himself and not due to his predecessors?
2
Is there any Philosophical significance to why Plato chose to present his work in the form of a dialogue?
4
Why were books of philosophy available in the orchestra in Platos time?
9
What basic metaphysics should every philosophy student know?
5
How to self study Plato?
10
Who is Plato and Socrates' God?
1
What does Plato think of human nature in the Republic?
2
Why most Plato scholars think that Minos is not good enough to have come from Plato?
5
Does the Platonic triad originate with Plato?