What is a logical fallacy that involves arguing according to a different definition of a word?

For example, one person may define capitalism as in private ownership of production and distribution while another may consider that there is no true capitalism until a market free of government interference is achieved.

This is convenient in debates and is also somewhat absurd as anything that isn't pure market is socialism or whatever.

Along with perhaps a false dichotomy, this could be described as moving the goal posts to make sure that one's position is always true/valid.

Is this a fallacy in itself and does it have a name? 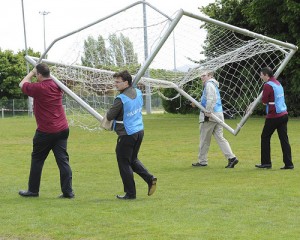 This sounds like an example of equivocation, which Wikipedia defines as follows

the misleading use of a term with more than one meaning or sense (by glossing over which meaning is intended at a particular time). It generally occurs with polysemic words (words with multiple meanings).

However, the term equivocation is mainly used for using two senses of the same word within a single argument, rather than a debate. See also equivocation on LogicalFallacies.info.

You are describing the No True Scotsman fallacy, which you might understand as a special form of equivocation (as in the good suggestion in another answer). NTS involves insulating a claim from counterexamples by appearing to use one of its terms (e.g. Capitalism) in a descriptive way, as describing and being made true by actual cases, but actually using it in a very restrictive prescriptive way. In this prescriptive sense, a writer allows that the term applies only when it makes the claim it is part of true.

For a reasonable person, that should count as a counterexample to the categorical claim. The writer should modify it or give it up entirely.

That is, the writer is actually using the term in such a way that it automatically excludes all counterexamples. It is being treated as true by definition. What's fallacious or misleading is that the claim is presented as a descriptive claim, when really it's offering a prescription for how to define its central term.

You might be thinking of the fallacy of four terms, where a syllogism arrives at a fallacious conclusion by using two different meanings for the same word. Wikipedia also has an entry about this fallacy.

2
Is there a term for the logical arguing of what *should* be done, as opposed to what is true?
1
What fallacy/fallacies are present when a person discredits another person's arguments, by claiming they are not arguing for their own position?
2
Is there a logical fallacy in "dropping down" to a different level of abstraction?
2
What is the definition of love according to Nietzsche?
1
What is a logical fallacy that involves saying that a person is something solely because they said so?
2
What logical fallacy or cognitive bias is in this statement?
1
Is arguing that one's opponent has "no evidence" an example of some identified logical fallacy?
1
What is the definition of time according to Philosophy?