If this is valid, how can you prove that it is valid?

It was an old anecdote "It depends on a definition what is is", but it seems to answer your question.

There are several formal meanings to is:

So, answering your question, variant (1) perfectly allows A is B and B is not A

In classical logic, equivalence is symmetrical. If A is B, then B is A.

While you've already gotten a few answers, it seems like you are having trouble extrapolating from classical logic or predicate logic to syllogistic logic.

It's easy to understand how categorical propositions interact in syllogistic logic, when you understand the square of opposition and the basic ontology of categorical propositions.
Every categorical proposition (e.g. "a is b"), can be reduced to one of these four logical forms. It is a true statement that every proposition can only satisfy one of the forms. It is a false statement that for every subject that is a predicate, that predicate is not the subject. To see a proof of this falsehood, consider the statement "A dog is a canine". If we let a = "a dog", and let b = "a canine", then by your proposed reasoning, a dog is a canine, but a canine is not a dog. Since the terms dog and canine refer to the same thing, this can't be the case.

Take a moment to examine the following diagram:

My guess is that the misconception arose during the classification of entities that satisfy a predicate, such as "furry dogs" standing in for all entities such that the entity is a dog and the entity is furry. Then we end up with an instance of a class and a class, and we compare them using the terminology that you used. So we get a = "Rover is a furry dog", but it is false that "a furry dog is Rover", because Rover is a concrete instance of a "furry dog" and "a furry dog" is an abstract instance - a universal. A furry dog is equal to the class of entities that are dogs and are furry, but a Rover is simply a particular entity that is a dog and is furry.

The Sameness In Reality:

1) Something has the sameness to something else,

2) Something has the sameness to something itself,

Here is a natural deduction proof showing that if a = b then b = a. If a = b also implied not b = a then first order logic with identity would be inconsistent: 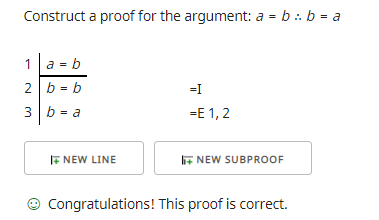 3
Does this idea have a name: “A is a type of B, but B is not a type of A”
0
Equivalent assertion
-1
If-then meaning in logic

1
The validity of the definition of a valid argument
2
Can Deduction for a Valid Argument produce the wrong conclusion?
5
If an argument can be valid in one logical system, but invalid in another, are logical arguments “meaningful”?
6
What is the nature of “validity” in deduction when dealing with conclusions unrelated to premises?
4
Is there an English language example where modus tollens is valid but contraposition is not valid?
22
How is the argument “I love all logic, but I don’t love deductive reasoning. Therefore, the moon is made of green cheese.” valid?
0
How is “~A. Therefore A -> B” a valid argument?
5
Is it possible for an argument to be logically valid but not truth-functionally valid?
1
can an argument containing a contradiction be valid argument
0
How to prove that the axiom H is valid in the following frame