What is the fallacy of defining a square as “a closed-plane figure whose sides are all equal”?

I am determined to prove my professor wrong. Here is a question from a recent exam:

A square is a closed-plane figure whose sides are all equal.

I do not believe that the right answer is offered as an option here.

I would argue that the fallacy committed in this definition is neither:

a.) obscure; the language is clear and not overly technical

b.) circular; at no point is the term used in the definition

c.) too narrow; the defined parameters do not exclude any squares

d.) unsuitable attribute; everything here refers to geometry and is suitable in describing a square

I believe that the definitional fallacy here is: "too wide". There are myriad polygons that could fit this definition besides the square. It should, in fact, be made narrower by including the parameter of having four sides or being a quadrilateral.

This was his response to my challenge of the question:

For the reason you say below the definition is too narrow by excluding polygons. 82% of the students put too narrow. I suggest focusing on exam 4-b and getting a higher square [sic] making your concerns moot. Otherwise, make an appointment to see me. You are doing well in the course, Professor X

First of all, the definition DOES NOT exclude polygons such as hexagons and equilateral triangles. Second, his statistic about other students' selections is not strong evidence and basically irrelevant, especially if the correct answer was unavailable. I really think that I am right on this one. Can anyone support my argument?

Here is wikipedia's summary of fallacies of definition for help.

I'm not sure what constitutes an answer to this question, exactly, but as a mathematician my professional opinion is that the given definition of a square is too wide. This is essentially a definition of an equilateral polygon, a very broad class of shapes which includes squares as well as rhombuses (diamond-shaped quadrilaterals), regular polygons, and many other types of polygons.

As Ram Tobolski points out, the definition also refers to the "sides" of a figure, which really only makes sense if the figure is a polygon. So of the four answer choices provided, I think "unsuitable attribute" is most correct, since a general plane figure does not have the attribute of "sides".

I'll try to demonstrate visually my point from the comments. I not only agree with the criticism of the definition by the OP, but I claim that the given definition is even wider, in that it covers not just perfect polygons.

Because the given definition

[A square is] a closed-plane figure whose sides are all equal.

applies to the following figure, which is not a polygon. 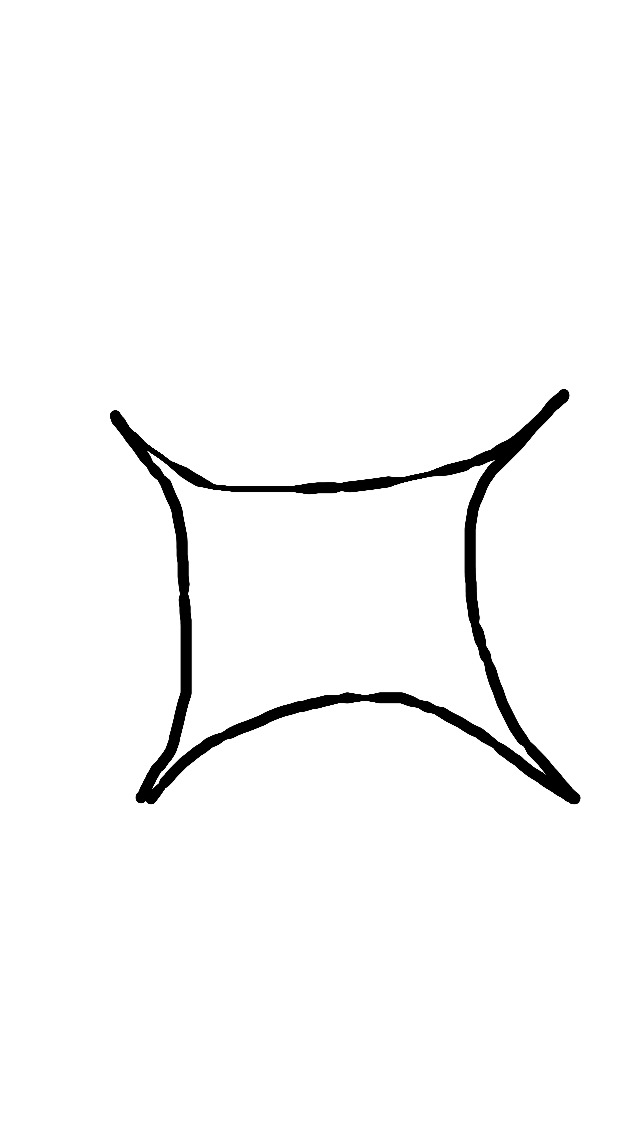 This figure is a closed-plane figure with four sides, all equal (trust me, they are equal :)). And it is not a polygon.

Not the answer you're looking for? Browse other questions tagged logic philosophy-of-mathematics ontology philosophy-of-language terminology or ask your own question.

16
What are some methods of defining things?
14
Are all fallacies created equal?
5
When it's stated that human beings are equal, what kind of equality is usually implied?
3
Are the truths of euclidean plane geometry contingent truths?
11
What is the truth value of the proposition 'All unicorns are beautiful'?
2
What is the name of the fallacy characterized by "All A are B; therefore all B are A"?
0
What underlying semantic notions connect the notion of 'thrown or hitting on both sides' to 'Amphiboly'?
2
Is the set of all true contingent propositions equal to the set of all true propositions?
1
What is the name of the view that math, mind, and matter are all that exist?