As I forgot to stipulate the pretermission of the logical equivalence P → Q ≡ ¬P ∨ Q here, some of the answers presume this and resemble petitio principii, and so are really proofs rather than intuitive explanations. So for this question: exclude, and do NOT use or rely on, any foreknowledge of ¬P ∨ Q as the answer, formal proofs, Substitution Instances or Truth Tables. Before attempting any proofs, how would you conjecture or divine that P → Q:

Unfortunately, you can't put intuition into words for the simple reason that intuition is prelinguistic (although perhaps "sublinguistic" is a more apt description?) That said, I will try and describe the basic idea of "if P, then Q" which is also known by "P implies Q", "P then Q", "P → Q" and such.

Each term [P, Q] can evaluate to either and only (true or false).

In the case of the inclusive sense of the logical constant "or" when the parent asks the child if they want peas or carrots with their dinner and the child says neither, they have failed to satisfy the condition established by the parents inclusive use of either peas "or" carrots. When the child requests only peas, only carrots or both, the parents condition is satisfied. Four choices only: one fails (neither), three satisfy (peas, carrots, both).

For ease of investigation, I will limit the next section to the P → Q notation and we can look at all the possible combinations:

So here then is my "intuitive" sense of these options.

1) "If true, then true"
We start with a true proposition and we end with a true proposition. Seems pretty straightforward that the entire statement is true. In the expression of "true implies true" it is tempting to imagine that the truth of the former 'true' implies the truth of the latter 'true, however, "implies" is misleading in this senses of "causes the latter to be true" and "causes the supposition to be true." It seems awkward to imagine any positioning of two true propositions that would result in false, so this supposition made of to two 'true's is true simply that we start with true and "...then true." At the very least the statement values are consistent.

2) "If true, then false" We start with true and end up with false. Why would we end up with false if we start with true? That seems confounded. In the expression of "true implies false" this feels almost embarrassing without even imagining that "implies" means "causes." In the sense of "true, then false" it is as if a mistake has been made or something working has broken; an intermittent problem has returned; the lights have gone out in the neighborhood. How could this supposition be other than false?

3) "If false, then true" Hmm... at first I feel like starting out false, it is disingenuous that we end up with true, but there we are: "then true." Can we not start in ignorance and confusion and come to knowledge and analysis by distinction of utterance as true or false? "False implies true" seems counter-intuitive in the incorrect sense of implication as cause, but "false then true" is as if the lights in the neighborhood, the television, refrigerator and all things electrical have started working again. How could this supposition be other than true?

4) "If false, then false" We start with false and end with false and that we end up with what we started with, this feels true. "False implies false" in the incorrect sense of implication is not so troublesome here in that it is true that false is false. "False, then false" is at the very least consistent and it is true that these are both false. See how we have come to truth from falsehood?

And such is my statement of an intuitive sense of supposition and two logical constants. I will leave it to you to consider the remaining forms with these descriptions of my intuitive senses.

What follows will be a more explicit articulation of supposition.

The supposition "if a proposition, then an other proposition" can be analyzed by explicitly articulating conditions which would satisfy the truth or falsity of the supposition.

The former proposition may be either true or false.

The latter proposition may be either true or false.

Is it enough to state that, "if the former is true and the latter is true, then the implication expressed by [derived from] the supposition 'if a proposition, then an other proposition' is also true."? Have we only presumed as much? Are we not simply expressing the conclusion redundantly by repeating the supposition "if something, then some other thing"? It may appear so. Such is a pernicious difficulty with the fundamental and trivial. Note that I do not use trivial in the pejorative sense of pertaining to useless information but in the sense that stating that the statements "the statement that 'Obama is President' is true" and "Obama is President" are true statements, and yet the two statements are distinguishable by the trivium of logic, reason and rhetoric.

It is trivially (in the sense of the trivium) worth noting that the first example is axiomatic (the former self-evident by definition and the latter axiomatic) and the second empirical (the former brute and the latter institutional); and, that all four propositions are true.

It is non-trivially worth noting by these examples that a supposition is not citing cause - whether physical or logical. The former does not cause the latter to be true in the way that the cold may cause someone to shiver. That the cold may cause someone to put on a sweater, however, we can see that the relationship which the supposition provides a minimal bound upon results in a rationally assessable, if not trivial, truth value. I will leave it to you to decide upon this most recent sense of "trivial". How then to cite proof that this rational assessment is reasoned by logic and not an imposed rationalizing of the psychopathological varietal? It is said that axiom is only true because we do not allow it to be otherwise, but is logic nothing more than dogma? Let us consider the following instead of the standard "if..., then..." expression.

Here I offer a formulation of a supposition without the logical constants "if" and "then": "I suppose that because [since] the Earth is an oblate spheroid that when an object gets dropped mid-air it will fall to the ground." Note that this supposition does not correlate to cause tho the constituent propositions are true and the content they describe have causes. What of the speculative supposition then? Do not these kinds of statements presume uncertainty? Do they presume uncertainty even when certainty may be achieved (I am hesitant to say "obtained" as tho knowledge of the empirical and axiomatic may be obtained, knowledge is not a dissolutive salve for every skeptics every doubt.) Also, if enough to inspire doubt, is the mere form of supposition enough to convince of a falsity where there is otherwise a truth? These are not questions this investigation seeks to address conclusively, tho I do ask that they be considered inasmuch as the reader is unconvinced of the rationally assessable truth values of suppositional propositions of the form, "if a proposition, then an other proposition". At this point I think we've reached a limit of useful investigation by only considering the former and latter propositions when they are both individually true propositions. What of "if true, then false"? For example:

What of "if false, then true"?

In both cases that the latter is true the supposition is true. Again, is this merely a reformulation of an "if..., then..." offering circular proof that "if..., then..." is true (because it's true?)? No. It is demonstration. Note here that a suppositional proposition is not an argument and all we are examining here is the relation of the two statements bound in the suppositional form. We are not saying "if false then false must be true." We are not citing cause, i.e. dividends requiring financing does not make 2+2=5. While "imply" in this instance might seem to suggest that "if false, then true" means "false implies true" or that "'if false, then true' is true" means true supposition makes false proposition true. Neither of those implications are implicit to the propositional relationship in a suppositional condition.

What of "if false, then false"?

How, it must be asked, could it be reasonably asserted that any supposition constructed from false propositions be true? Simply by noting that it is true that both propositions are false.

At this point I will leave it to you to consider the equivalence cases and hope that my answer is enough to convince you that while I appreciate apprehension regarding formalities, their is much to be gained from the expediency of the formal notation, and, something to be gained by laboring their point.

P → Q means: If P is true then Q is true. Implied is further: If P is not true, then I don't say anything about Q.

One way to view this intuitively is to construct a graph.

The following is a graph of a relationship of P to Q that represents "P → Q". The domain of the graph is the part in the square. P is the beige oval. Q is the green oval. Everything else in the domain is yellow.

Note that the Q oval contains the entire P oval. That is what makes the conditional work. 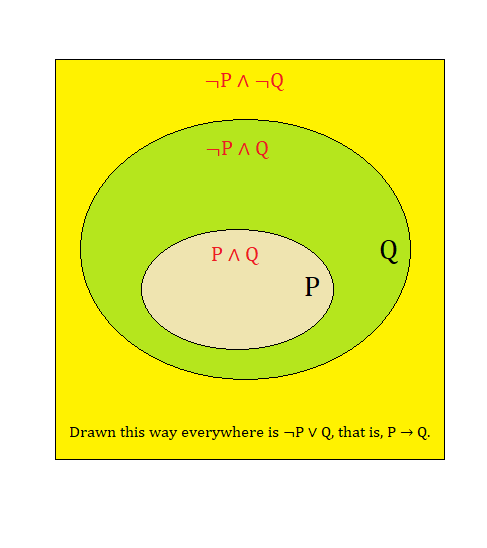 Consider what happens when the P and Q ovals overlap such that the P oval is not completely contained within the Q oval. Then the conditional fails because there is now a region where we have P and not Q. 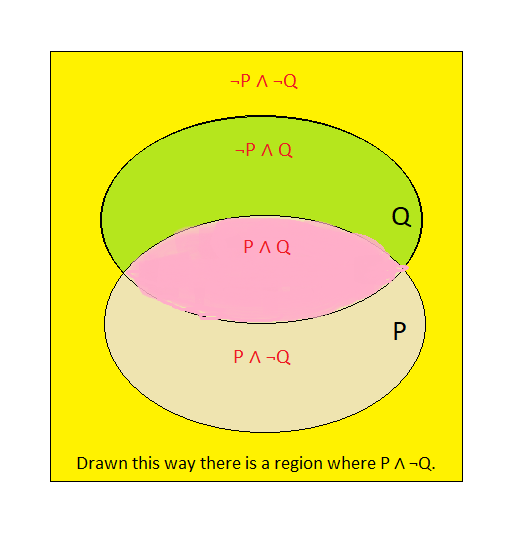 To consider what happens when not P ∨ ¬Q look for the regions on the graph that this is true.

2
Why is this set {CqCpq, CCpCqrCCpqCpr, CCNpNqCqp} the most common set of axioms for propositional calculus?
6
How can one prove that an apple is not an orange?
2
How can you derive De Morgan's Law?
0
Before starting the Reductio Ad Absurdum, how can you guess or divine that F causes the contradiction?
1
From given premises, how can you conjecture the conclusion before attempting any (dis)proof?
4
How can one intuit that P → Q ≡ ¬P ∨ (P ∧ Q)?
3
Can you imagine the illogical?