Is it possible to have an original thought and express it in english?

Given that we have learned English and all the words are defined for us, is any combination of words we string together and speak/write an original thought?

Or since all the definitions of words already exist, the components of thoughts that we express, would that render all expressions in English unoriginal?

Even if a person took letters from the alphabet and arranged them in a way that has not been spoken or written before, the author would then have to define what that new word or name means using the same English words that I pointed out already exist and are defined.

The same problem happens when a new invention is created, it generally uses a combination or modification of existing inventions.

I suppose that a very small child, that does not yet know any language, could have an original thought. But would be unable to express it in any way, other than maybe appearing happy or upset without the cause known to us.

In your question you seem to be touching on the Analytic/Synthetic distinction, and on Hume's relations of ideas vs matters of facts, and Kant's a priori/a posteriori distinction.

Based on these definitions, we end up having four types of statements : 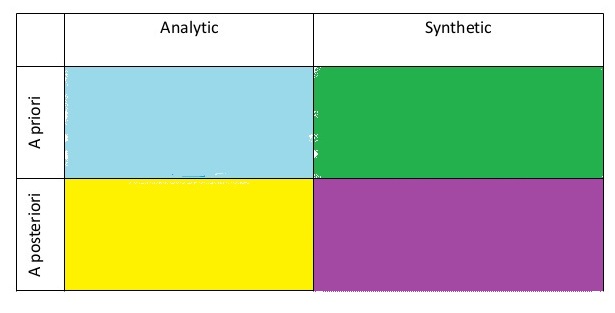 Hard Empiricists like Hume or Wittgenstein believed that only the types of statements in the blue and purple quadrants are possible, and those in green in yellow are impossible.

When you say that all statements in English cannot be original because they are just combinations of existing terms, you are essentially saying that all a priori statements (those based on logic and reason) can only be analytic, they cannot be synthetic. To put it otherwise, for a given well formed statement in English, all of the information in the statement is already contained in the definitions of the words used in the statement.

So you are agreeing with Empiricists that only the blue and purple quadrants are possible and that the green quadrant is not possible.

Kant however disagrees: One of his most important results is that a priori statements can be synthetic. And expression can indeed contain more information than the mere definition of the terms that build it. His main examples are mathematical equations: An equation such as:

contains more information in it than the mere definitions of a and b. And if this is possible for mathematical equations, in can be extended to the English language as well (if only by expressing mathematical relations in plain English).

To summarize: An original thought would correspond to someone coming up with a valid synthetic a priori statement, and if you are an Empiricist, that is not possible, but if you are a rationalist, it is.

Is it possible to have an original thought and express it in english?

Yes you can have an original thought.

And then later you can express this though in English. Just because you are using a language not invented by you does not preclude you from having your own original thoughts and express them in any way means shape or form.

You may not have been the first to express this thought, but that does not mean that it did not originate from you in the first place.

Everybody can become hungry. Yet you probably would not say that you are copying your hungriness from others when you express that you are hungry using the English language.

Here's a thought that by the mathematization of permutational probability we can suppose no one else has ever thought before; it is a proposition we can suppose has never been referred to: 'Complex numbers don't exist at 7:45p.m. ET on Thur., Jan. 5, 2017, which is the day I was too hyper and that I thought in the morning about how intuition is dealt with in Cartesian epistemology, based off that Internet Encyclopedia of Philosophy article I read at school on Wed., Jan. 4, 2017.' How is this not an original thought?

This depends on one's definition of "original". If "originality" refers to the change in state of an object from non-existence to existence by the act in question, then one can argue that everything is in existence, for the very conception of the potential for existence is existence in an abstract form. From that perspective, the answer to your question is that it is not possible to have an original thought at all.

If, however, "originality" refers to the person who thought of a "thought" first, then one must define exactly what a thought is, for the behaviourial and physiological aspects of the person in question differs from any other person whom you would think has that "thought", and so the thought would not be same in that regard.

On the other hand, if we restrict ourselves to an exact unambiguous definition of each word in the English language, and consider thoughts from only the perspective of the English words produced, then the answer to your question requires one to know all the English words produced by all people speaking the language. This immediately presents problems since (barring the obvious one of there being multiple and ambiguous definitions of words) the English language is constantly evolving across locales and eras.

I like this question: the question by itself already looks as an original thought to me:-) I think it artistically composes two fundamental questions that may have opposite answers on an expression of original thoughts:

This is a variation of the story about a large enough group of monkeys typing on on type-writers, given enough time, will type out the complete works of Shakespeare.

Of course, not real monkeys, fictional monkeys that do what we ask of them so that our thought experiments are actually carried out.

Its possible to work out just how long this would take, and its probably on the scale of the lifetime of several universes - maybe a multi-universe worth of universes.

Heidegger said that man is not apart from his world; here these monkeys are - what they type is of no meaning to them; for them this is a world apart; between their world and this world - an infinite distance, though that world is right before them; were they to type out a poem or a play, it would mean nothing.

Because man is not apart from his world, everything he makes has its provenance in already existing world, which is then hewn into a new shape; not altogether different, and not altogether the same; the degree of difference is the degree of originality; and that degree manifests itself in different ways, in different spheres of conduct - of making ones way in the world: a child learning to write, for him a new experience, a new form of consciousness, a new way of being conscious; and this is not taken away even if every child has done this. This is still original in this sphere - his life-world; but the life of the species is made of many spheres; and the life of the universe, still many more.

Given that we have learned English and all the words are defined for us, is any combination of words we string together and speak/write an original thought?

Well, definition is only part of the story when it comes to meaning and use of terms is just as important. The same sentence made of the same words in the same order can have different meanings depending on use and context of use. For example "flying planes can be dangerous" may mean the act of piloting a plane, or planes in the air can be dangerous.

Or since all the definitions of words already exist, the components of thoughts that we express, would that render all expressions in English unoriginal?

No. One of the features of sentences is that even given a limited set of letters and words, there is a limitless possibility of word combinations.

Even if a person took letters from the alphabet and arranged them in a way that has not been spoken or written before, the author would then have to define what that new word or name means using the same English words that I pointed out already exist and are defined.

Well, simply saying "now" is referring to something original as right now has never existed before.

The same problem happens when a new invention is created, it generally uses a combination or modification of existing inventions.

It depends somewhat upon the scope of your descriptions. Yes, in a poetic sense, "There is nothing new under the Sun" and anything is just a different combination of particles which have been around since the beginning of spacetime, however, there is much to be said for novelty. Consider that for the U.S. Patent and Trademark Office all a patent application requires is "a novel application of an idea."

I suppose that a very small child, that does not yet know any language, could have an original thought. But would be unable to express it in any way, other than maybe appearing happy or upset without the cause known to us.

I don't really buy that. If thinking is pre-linguistic, then there is no way to express the thought, therefore, how would you ever judge originality?

Lastly, consider that status functions are something we create with language. Like the election of an official - the status function is based upon agreement about how we use our words to ordain and define the scope of powers afforded the office. We use our words such that X counts as Y in context C, e.g. the carbon fiber and ink or metals of paper and coin money count as money in the context of the economy our government secures.

Not the answer you're looking for? Browse other questions tagged consciousness knowledge truth or ask your own question.

16
What are examples of analytic a posteriori knowledge?
9
What are the more complex/interesting examples of synthetic a priori statements?

7
How can I solve my contradictory thoughts about the relevance of human knowledge?
6
How should we choose between different theories according to Rorty, based on Kuhn?
1
If consciousness is an emergent property of brain state, does this mean that we can only truly exist for 1 Planck unit of time?
8
Is it possible to have truth if objective randomness exists?
2
Is it possible for the "feeling of having a rational thought" to be an illusion? If so, how can you have any confidence whatsoever in your thoughts?
2
How is Wittgenstein’s “notorious paragraph” about the Gödel's Theorem not obviously correct?
0
Self contradictory things that can't really exist: can they be fully conceived of?
4
What is the relation between a priori and tautologies?