Is belief an intentional act?

Both "belief" and "intentional act" are ambiguous terms, so the answer may depend on specific meanings, even for the same author. Ordinary factual beliefs, as in Plato's "knowledge is justified true belief", are typically not considered to be freely chosen, and therefore not intentional on the common meaning of "intention" (but see the last paragraph). They function rather as constraints on intentions to act, see Belief, Intention, Intentional Action by Speaks. "Choosing to believe" is quite different from ordinarily believing, try choosing to believe that the Sun will not rise tomorrow. However, "belief" is also used equivocally for "beliefs" in values ("faith"), and often both types are mixed. Values, like hope, love, etc., or some vehicles for values, like God, karma, etc., are open to choice, and on the traditional account require intentional acts, the acts of faith. There is also perennial controversy about the nature of volition ("free will"), and hence reality of "intentions", but in practical terms the difference between libertarian and compatibilist interpretations is mostly verbal.

As examples of "spiritual beliefs" indicate, it is not always straightforward to draw the line between factual and value side of beliefs. Moreover, some factual beliefs can be subject to choice, which would make their adoption an act of will (again on the traditional account). The simplest case is the liberty of indifference, when there is no preponderance of evidence for or against a belief. One is literally free to choose, and act on it. Situations of "hoping against hope", internal conflict, when core beliefs clash with acknowledged facts, etc., show that one can even choose to believe against compelling facts. Justification of willful belief choices in the face insufficient information by necessity to act is the central theme of James's lecture The Will to Believe:

"Our passional nature not only lawfully may, but must, decide an option between propositions, whenever it is a genuine option that cannot by its nature be decided on intellectual grounds; for to say under such circumstances, "Do not decide, but leave the question open," is itself a passional decision—just like deciding yes or not—and is attended with the same risk of losing truth."

In the light of recent neuroscience experiments it has also been argued that it is the action itself that is chosen, and the accompanying belief or "intention" is a confabulation (apparently, in experiments people often time their "intention to act" to after their muscles already start contracting, if not later), see How Does Neuroscience Affect Our Conception of Volition? by Roskies.

In my Buddhist training, I was taught that belief is nothing more than the result of our interpretations of experiences. People believe in science, for example, because science offers concrete and demonstrable examples which allow people to duplicate these direct experiences for themselves.

Most of the religious world does not do this, though until about 600 years ago (the Holy Roman Inquisition) this was in fact the norm for religion. With the rise of the Inquisition, reason was considered evidence of witchcraft, especially if it was reasoning that contradicted what the Catholic church said. The charge of heresy against the Catholic Church was not levied against anyone in history prior to the year 1156, save those who were actually clergy who were teaching things that opposed the core teachings of that faith.

Our discernment today has come a long way, but still has yet to invalidate the actual experiences that people have, because of the general tendency to be dismissive of religious beliefs as little more than a choice, rather than accepting that there may in fact be an underlying experience that the person clings to. It may be misinterpretation, but going on the offensive (from the perspective of the believer, who in today's world likely feels just as persecuted as any of our religious forebears) causes a further entrenchment into the idea that they have, and can actually inhibit the ability of the believer to reason fully and accept alternative ideas.

So yes, there is a choice that occurs. But there are actually several qualities of choice: conscious, informed, well-reasoned choices are almost always at odds with those which are spontaneous, reactive, or intuitive choices. And many choices are made before we're even aware of the choice to begin with: why did you choose the shirt you wear today? Why do you choose to buy your socks where you do? Why is one shirt preferred more than another? What will you eat for breakfast tomorrow? Hundreds of choices per day.

Experiences result in analysis (where lots of people are lacking, including those who really shouldn't be). The result of analysis is a belief. We then build our thoughts on those beliefs, which create ideas. The ideas further what we look at in the world (e.g., perceptions), and these in turn motivate us to take actions. The graphic below should illustrate this paragraph. 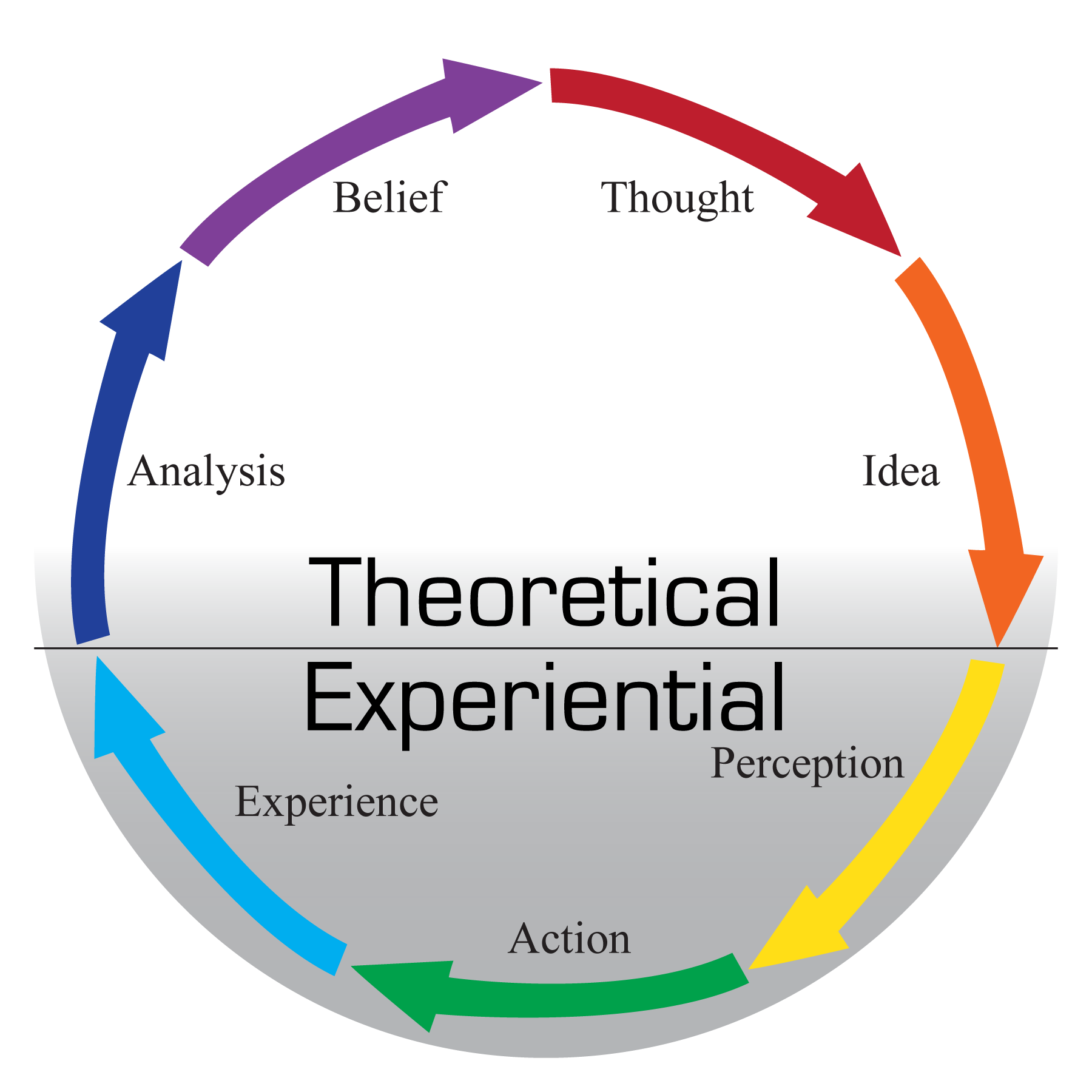 My approach to this would be to use a synonym to: "I believe."

I believe that "I am convinced" is pretty much the same thing as "I believe."

The Merriam Webster dictionary also shows belief to be a synonym of conviction.

Now you CAN convince somebody of something. That means it does not just happen unconsciously but with conscious interaction. Also see unconvincing which is defined as:

not credible or plausible

Plausible in turn is defined as:

having an appearance of truth or reason;

Meaning if something is reasonable, agreeable to reason or sound judgment, it is useful for convincing somebody enough that they eventually believe you.

Now if you convince yourself through your own experience or you experience somebody else convincing you is just a difference in semantics.

So in the same way you can choose to be convinced by something or chose to intentionally ignore sound reason.

Most beliefs, like love and hate, are spontaneous: it is as impossible to believe the sort of thing one does not believe as to love those things that inspire hate. Yet, there are chosen beliefs, but beliefs that are chosen are actually entirely different from the spontaneous ones. The difference is such as between "p" and "p is true."

This answer demonstrates how modern philosophers do philosophy.

Not the answer you're looking for? Browse other questions tagged free-will belief intentionality or ask your own question.

15
What is the difference between knowledge and belief?
5
How can someone have a free will if they act based on their experiences?
0
I have trouble formulating how to act rightly at all situations
2
How does self-deception differ from psychology's concept of “motivated reasoning”?
0
Is it metaphysically possible for a belief to act directly?
1
Difference between “epistemological” belief and “theistic” belief
3
Does understanding require momentary belief?