How can Searle's Chinese Room argument refute to this argument? [duplicate]

I'm a relatively new student studying philosophy and became interested in the computer models of mind. I've read John Searle's CR experiment and had a quick thought. How can CR experiment refute to the below?

If a computer is fed with bunch of data that it actually learns or correctly answers questions about that data without being taught how to do so, is it not being intelligent?

Say for instance, a system is given a multiplication table from 1 to 100. It's taught formally and knows how to read the table and give correct outputs of multiplication. Let's say the computer "learns" how to multiply (say the data above is enough for the computer to actually learn multiplication).

If a user asks "101 x 101?" and the computer correctly answers it, this displays learning and thus capability to think?

artificial-intelligence john-searle
Share
Improve this question
edited May 2 at 11:35

If the instructions in the Chinese room were so abstruse that one could actually follow them without indirectly acquiring the ability to read Chinese, the person in there would not learn Chinese. The problem here is that odds are that over time he actually would learn Chinese, to the point that he only occasionally had to refer to the instructions. We all know this, because the actual process of speaking Chinese is simpler in human terms, than any description of it. We are information-based, meaning-seeking animals. Our language performance ability outstrips our ability to form lexicons and usable grammars by many orders of magnitude. From the point of view of someone like Winograd in his simplification of Maturana, it is this kind of built-in process that renders finding meaning more natural to us than performing tasks that forms the content of understanding.

But that is not true for a machine. Instructions are instructions and following them is what the mechanism does. If those instructions are a heuristic for learning the pattern behind a process, they may uncover that pattern. But then that heuristic is the program. The data about multiplication is not the program in your example, and the machine is not learning multiplication, it is displaying its program's ability to recognize and reproduce patterns of behavior. It has no bias toward finding meaning. It may borrow ours through simulations of ourselves that we create, but it does not have and understanding (in the above sense) of its own.

Basically, you are cheating: you are giving the machine a great deal more information than a human starts with, and then ignoring the fact it is there. So this is not a challenge to the argument, once you include the setup of the machine. And you are assigning that borrowed power to the machine itself, as if it did not come from outside.

Keep in mind that Searle's "Chinese Room Argument" is a refutation of the computational theory of mind and not a refutation of the possibility of machine learning or non-biological consciousness (as it is often mis-read that way). Nor is Searle's theory positing that the computer is not a useful metaphor for consciousness or tool for examining consciousness - both, however, have their limits. What Searle is doing with the Chinese Room argument is showing the limits of syntactical manipulation to achieve semantic content. His aim in doing so is to explain and one day demonstrate how to get from "the physics" to "the semantics." 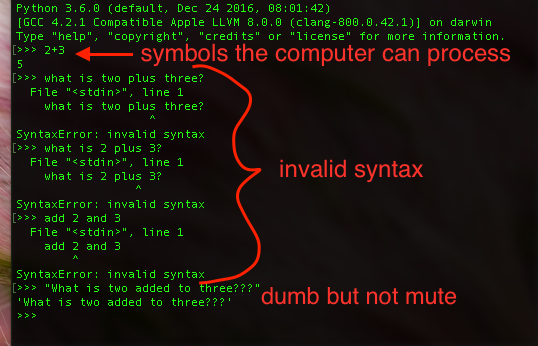 In the case of what computers (i.e. Turing machines) are actually doing, they are only literally learning in the sense that "literal" is used to mean "metaphorical" or "figurative" and not actual. To the point tho, what is meant here by your question: "is [the computer] not being intelligent?" - "intelligent" according to whom? "Learn" according to whom?

For example, in computation what are called "neuronal networks" are an analog of how we can usefully model what is happening in the brain (and presumably causing consciousness). A metaphor, however, is all it is. We simply do not know enough about the physical processes in the brain and the body which cause consciousness to simulate anything other than artificial intelligence - "weak AI" in Searle's parlance (something he is not arguing against)

Lastly, to address your question so that you may formulate one which has heuristic and not merely interpretive value, consider as well in which sense do you mean "intelligent"? Or "Artificially intelligent"?

From "Brain, Mind, and Consciousness: A Conversation with Philosopher John Searle" March 3, 2015 by Dan Turello

The expression â€śArtificial Intelligenceâ€ť is multiply ambiguous, and it is unfortunate that this ambiguity has not been sorted out. An artificial x can be either a real x produced artificially or a fake x. For example, artificial dyes are real dyes produced artificially, it is just they are not produced from vegetables. Artificial cream, on the other hand, is not real cream but fake cream. So â€śArtificial Intelligenceâ€ť can mean either something that is not intelligent and is produced artificially, or it can mean something that is actually intelligent produced artificially. â€śIntelligenceâ€ť is also ambiguous because it is ambiguous between real, honest to John observer-independent intelligence â€“ as, for example, when a human being is thinking about something â€“ and the observer-relative, derivative, metaphorical sense of intelligence â€“ for instance, when we speak of my pocket calculator or computer as displaying intelligence. This is unfortunate because in the sense in which humans have real observer-independent intelligence, commercial computers have nothing like that. The sense in which the computer is intelligent is entirely observer relative or metaphorical. The reason the â€śintelligenceâ€ť of the commercial computer is entirely observer relative is that we do not know how to make a conscious computer. Existing computers work entirely by having complex electronic circuits, and what we think of as â€ścomputationâ€ť is a series of programmed transitions between the states of the complex electrical circuitry.

Not the answer you're looking for? Browse other questions tagged artificial-intelligence john-searle or ask your own question.