Let me make myself clear. At level 0 I'm alone - myself. Level 1 might be my family. Going up, at some level i comes my nationality. I'm united with my fellow citizens with the identity of nationality. But the same identity (nationality) makes me and people of this world divided.

I'm new to philosophy, too, so bear with me.

I THINK that translates to "I'm a member of my family, therefore, my familial relationship is going to create a conflict with my nationality."

Of course, that isn't necessarily so. It would be more accurate to say,

My family COULD create a conflict with my nationality.

Also, the word "level" suggests some kind of hierarchy, apparently based on number. For example, family > nationality > human race.

Though that's certainly a valid thing to ponder, it might be more fruitful to think in terms of overlapping associations or spheres, such as families, clubs, political parties, graduating classes, nationalities, races, etc.

We could then summarize, various groups can either reinforce or undermine our bonds with other groups.

An interesting question, one that relies on certain mathematical ordering principles in the current form of the inquiry. It is noticeable that you implicitly applied a sort of set/subset/superset reasoning to the question, particularly from the areas of number theory and set theory, though I think your question can be removed from that sort of or organization but still retain its essential merit.

You do provide a thoughtful basis for attempting to classify and delineate where exactly singular identity can give way to multiplicity, and somewhat inevitably, division and conflict. Now, you conjecture that this boundary exists as a readily identifiable, or as you more strongly state, in an "intrinsically" defined manner based upon the current state of a system. This already begins to suggest social theories of organization, as well as cognitive and psychological theories of the individual. For this, I am not qualified to answer, but I think you would perhaps enjoy as a starting point Sigmund Freud's Civilization and Its Discontents, which more or less discusses how people came to organize themselves, and how conflict can be intrinsically present through the suppression of human instincts.

To provide a personal judgement on your conjecture, I think that it is false, and by way of counterexample. You seem to implicitly rely upon the assumption that there can only be one level of unity, lets say level n, and therefore disunity results at level n + 1. This becomes problematic, because in your example, you show that any level of unity must necessarily rely on preceding levels of unity, i.e., n - 1, which is a contradiction, as n - 1 necessarily implies, by the hypothesis, that level n is disunity. We have reached a contradiction, but how? This is motivated by a physical interpretation of what is going on. For example and in a more concrete sense, can you have national coherency without the cohesion and harmony of a family? Without the cohesion and harmony of social or political organization? Perhaps yes, perhaps not. Essentially, the way in which you attempt to order 'unity' is highly intriguing, but not entirely iron clad. Interesting attempt of applying mathematical ordering to think about, though.

No matter which criteria (gender, race, nationality, religion, ideology, hobby, ...) humans apply to associate themselves with others, any such association inevitably results in a division between members of that group (the ingroup) and everyone else (outgroups). Typically, this results in biases favoring the ingroup over the outgroup, known as In-group favoritism.

This phenomenon has been well-researched and well-understood by scientists in the fields of social psychology and sociology. For more details, I suggest you do some research on crowd psychology, social identity and how they correlate with each other. 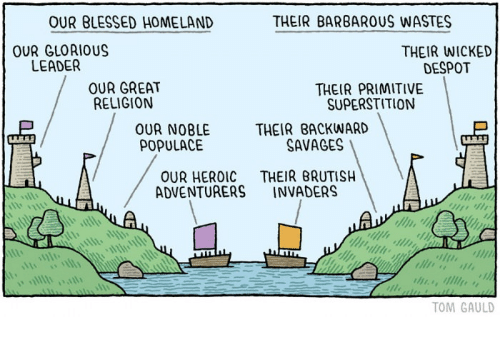 If one country (N_c) went to war against another, families (N_f) would unite to match the highest order of N.

Even the very idea of family unites some and divide other, but in the case of being challenged by a group of higher N, the challenged group would rise in N.

I think the magnitude of the N depends on the challenge to this magnetude.

Yes, going up a level will obviously exclude some people, because the definition becomes more specific. But you seem to be saying that it will exclude everyone in the lower level group, which is clearly incorrect.

You and I live in the same world so we are together at level N. We also both speak English, so we are united at level N+1 as well.

The effect is an artifact of the assumption that if level "N" exists, then it must unify more individuals than level "N-1" did. Without that assumption we can do things like define Level N-1 to be "family" and Level N to be "family" as well.

If you can identify a highest level, then you can phrase the construction backwards and the behavior is a bit more sane. If you have a level N, you can define a level N-1 by creating a partition around an attribute. This process continues until you reach level 0, which is an individual that cannot be divided further.

Not the answer you're looking for? Browse other questions tagged thought-experiment or ask your own question.