Is the scientific method, itself, falsifiable?

Fundamental to science is the concept of hypotheses being falsifiable. A falsifiable hypothesis, naturally, is one which could be proven wrong by empirical experimentation or observation.

Karl Popper advocated for "critical rationalism," and built much of his argument around the idea of falsifiable statements.

No, and we should not want it to be falsifiable, nor expect it to be on its own terms.

How could a scientific method be falsifiable, and why should it be?

To be falsifiable it would need to make a lot of predictions (or retrodictions) about what we should observe. I don't think any scientific-method candidate itself makes predictions. Let's take Bayesianism as an example. It offers a method for updating beliefs in light of new evidence. What does it say we should observe? Nothing. It is silent about that.

Indeed why would we want a method to make predictions? It is a category mistake to want this from a method. Recipes for cooking pie or soup don't generally make predictions (or if they do, it's not essential to what they are). They offer advice about what to do.

It may be right that the scientific method "advocates the use of falsifiable hypotheses," (though theoretical science involves hypotheses not open to falsification). But if so, it advocates using them as scientific hypotheses, not as exhausting the kinds of useful or meaningful sentences more generally.

In Popper's case in particular, he did not describe falsifiability as a criterion of meaning — not even in the narrow sense of "cognitive significance" used by some positivists. So, no scientific method, including any form of falsificationism fails to be meaningful, or could fail to be meaningful, by virtue of unfalsifiability.

So, in short, no candidate for being a scientific method is likely to be falsifiable, and I can't think of any reason that should worry anyone.

no. to think that a method could be "falsifiable" is a category error. propositions are true or false; methods are neither. "the scientific method" (never mind the fact that most scientists and phosophers do not believe there is such a thing) is not a proposition, so it cannot be either true or false, and thus cannot be falsifiable.

You may find Jarvie's analysis of the normative component of Popper's 'falsificationism', cited here 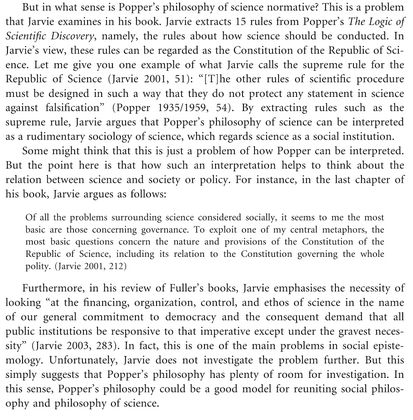 On Twenty-Five Years of Social Epistemology: A Way Forward

Seems to me like the normative component is falsifiable, as we can discover that his suggestions make for bad science: surely he allows scientists room enough to say that a scientific theory is just bad.

Not sure about the descriptive component.

But anyway, his 'falsificationism' is not consistently wedded to deductive justification, so it probably doesn't matter. i.e. the weary falsificationist could merely say that it's not true that real science is such and such, but the claim is justified etc..

For example, science's sucess depends on the laws of nature stayng immutable.

1 That assumption itself is irrational. As such, it is neither a scientific theory, nor it is referenced by the scientific method. Instead, this and other assumptions about reality add up to Søren Kierkegaard's "leap of faith." Specifically, it's a leap out of "cogito ergo sum" trap and towards the One and only explainable reality that we all share and are a part of.

It is fair to say that the principle of falsifiability is not in itself falsifiable. This was the undoing of logical positivism.

However in the context of natural science, it is more accurate to say that science is nowadays defined as the application of falsifiability to the study of nature. If you question falsifiability, you are kissing science goodbye.

Other modes of study are possible, but they are unscientific. That is not to say that they are necessarily irrational or never yield useful insights to the investigator, just that those insights need not be falsifiable and anybody who suggests they are is indulging in pseudoscience. Most interpretations of quantum mechanics and some even more abstruse theories such as string and M-theories fall victim to such criticisms.

Not the answer you're looking for? Browse other questions tagged philosophy-of-science falsifiability or ask your own question.

0
Do we consider all parameters when we deal the term, 'SCIENTIFIC'?