From An introduction to formal logic by Peter Smith there is a question:

Let's go with definition (2) first. Suppose you have a valid argument P, Q |- R. That means you can derive R from P and Q. Adding extra premises, S, T, cannot prevent you from deriving R from P and Q.

If an argument is valid, then (by definition) it's impossible for its premises to be true and its conclusion false at the same time. Adding an extra premise cannot change that. By adding premises you can only go from invalid to valid, and not vice versa.

Another way to think about it: suppose you have an invalid argument. That means there's a possibility that the premises are true and the conclusion false. Can you eliminate that possibility (and thus make the argument valid) by removing a premise? No, you can't.

As a preliminary consider the definitions of validity and jointly logically consistent provided by the authors of forall x: Calgary Remix.

Here is their definition of "valid" (page 8):

An argument is valid if and only if it is impossible for all of the premises to be true and the conclusion false.

Here is their definition of "jointly logically consistent" (page 72):

A1,A2,...,An are jointly logically consistent iff there is some valuation which makes them all true.

Derivatively, sentences are jointly logically inconsistent if there is no valuation that makes them all true.

Consider the question: Can you make a valid inference invalid by adding extra premises? 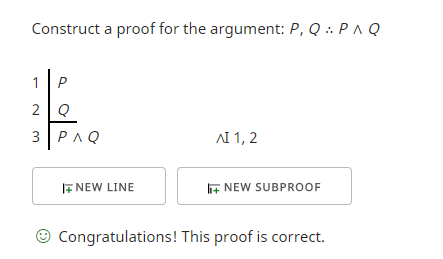 The two premises are assumed in lines 1 and 2. By using the conjunction introduction rule (∧I), I reach the goal in line 3.

Suppose I add ¬P to the premises to see if this expanded set of premises affects the validity of this argument. Since I am not using ¬P in the proof the proof checker shows that it does not. 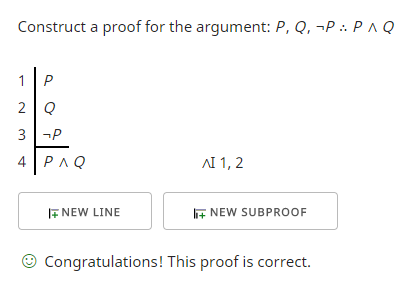 Although the particular argument remains valid, something changed. I can easily find an interpretation for the first argument using "P" and "Q" as premises, but I will not be able to find any for the second argument using "P", "Q", and "¬P". 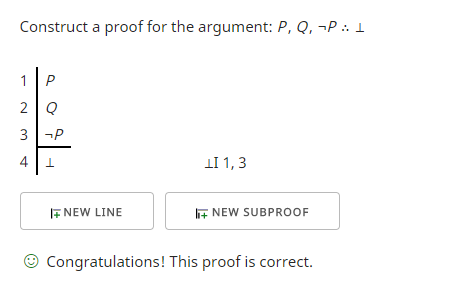 In summary Peter Smith's question attempts to help the reader distinguish between the validity of an argument and the joint consistency of a set of premises.

Only if you add premises that make the system inconsistent, because then the whole logical system foes out the window.

Put together, you can infer

If you add add

Then your system is inconsistent and you can prove anything you want.

YES, always it will become invalid. If you add a dimension (extra premises) then the inference (conclusion, theory) has to change. If you analyze a subject based on two dimensions and draw your inference but then somebody shows that it is a three dimensional case then the original inference will become wrong. Dimensions are nothing but additional features.

As an example, Kepler said – satellites go around earth in an elliptical path and then produced a position formula for the satellite at any given time. His premises were - static, two dimensional, and on a paper. But in reality the earth is moving in 3D space around the sun, the sun is also moving in the same 3D space around the galaxy, the galaxy itself is moving in the universe. Thus when you add these dimensions, the Kepler’s law becomes invalid. Path of the satellite never meets and therefore will never be elliptical. The complexity of the path is beyond our comprehension.

For more on the laws of nature and on universal truths take a look at the free book at the blog site https://theoryofsouls.wordpress.com/

Not the answer you're looking for? Browse other questions tagged argumentation validity or ask your own question.

1
Sound and Unsound arguments?
7
Why is Tarski's notion of logical validity preferred to deductive one?
6
What is the nature of "validity" in deduction when dealing with conclusions unrelated to premises?
1
Question of Validity in syllogisms of deductive argument
0
How does one call an argument where the premises do not necessarily lead to the conclusion?
2
Deductively valid arguments and situations
0
Checking the validity of an argument