Socrates as a foot soldier and his political philosophy

Socrates is well known for his participation of several wars during his life span (for almost 30 years). It is believed that he was 48 at his final participation in a war. As an armed foot soldier, he was reportedly very brave and competent in his art of combat. It is also reported that he observed and experienced many horrors and sufferings, i.e., some evils of war first handily. No philosophers ever talk about this foot soldier experience of Socrates when they talk about Socrates' philosophy. But surely the experiences of the evils of war should have left some post-traumatic stress on him, which could have influenced his idea of a just nation. What can be some features of the just nation (the Republic of Plato) that might have been the result of his experience as a soldier?

EDIT: I should have added where I got the idea. I read this article entitled "Socrates in Combat: Trauma and Resilience in Plato's political Theory" http://faculty.wcas.northwestern.edu/~smonoson/documents/SocratesCombat.pdf 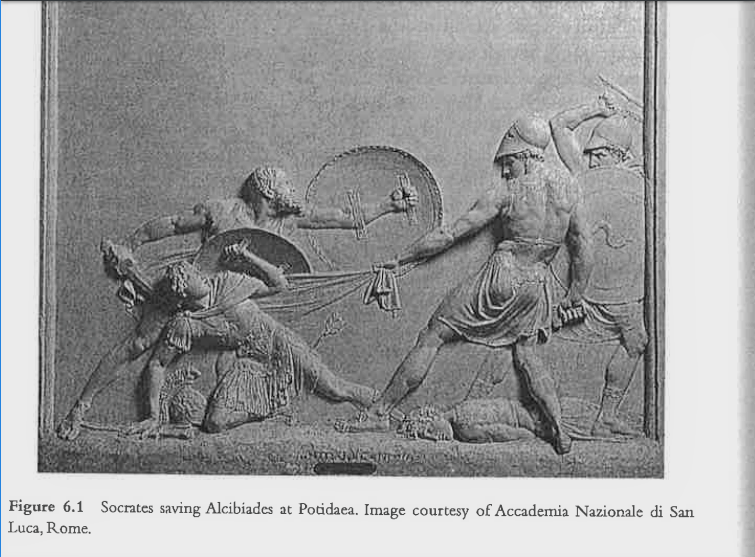 We don't know how far any of Plato's dialogues reflect the views of the historical Socrates. We do know that in the 'Republic' 'Socrates' has no problem in finding a proper and important role for warriors in the polis. His military experience has certainly not driven him to pacifism. If anything in the 'Republic's depiction of the ideal polis bears the imprint of Socrates' military experience, or of Plato's impressions about it, it eludes me.

Perhaps a more relevant dialogue is the 'Laches' in which reference is made to Socrates' military service. At 181a-b Socrates is portrayed as a courageous and honourable soldier in the retreat from 'Delium'. The same incident is mentioned in 'Symposium' 221a-c where Socrates is represented as cool, unpanicked, efficient, and brave.

There is no indication in the dialogues that Socrates was psychologically harmed or otherwise affected by his military experience. In Laches he uses that experience as material for reflection. In spite of what others have said of his courage, he claims not to know what courage is and is soon usefully busy in seeking its definition. Military experience like everything else is grist to the philosophical mill.

In Plato's Symposion Alkibiades declaims an eulogy on Socrates, in particular on his braveness during the Potidaea campaign; cf. Symposion220 ff. Apparently the speech is a hagiography. We cannot derive from the text which traits of the literary portrait of Socrates are historical.

Also in Plato's Republic and other dialogues with Socrates as main interlocutor it is always debatable, to which degree we hear the historical Socrates speaking. Plato in his middle and later dialogues employs the stylistic means, to put his own philosophical teaching into the mouth of Socrates.

Therefore I am doubtful about the possibility to answer your question: What can be some features of the just nation (the Republic of Plato) that might have been the result of his experience as a soldier?

Definitely his views on different musical modes allowed in Republic:

What, then, are the soft and convivial modes?

There are certain Ionian and also Lydian modes that are called lax.

Will you make any use of them for warriors?

None at all, he said, but it would seem that you have left the Dorian and the Phrygian.

I don't know the musical modes, I said, but leave us that mode that would fittingly imitate the utterances and the accents of a brave man who is engaged in warfare or in any enforced business, and who, when he has failed, either meeting wounds or death or having fallen into some other mishap, in all these conditions confronts fortune with steadfast endurance and repels her strokes (Republic III 398d-399c).

But it was not enough simply to regulate the modes; Plato wanted to limit them. In his book (ten books, actually) Republic, Plato manages to argue away most of the modes. He wanted strong and courageous leaders, and any music that promoted weakness, or intemperance, was not a mode for him. Dirge-like modes, like the Lydian mode, are out, as is the Ionian, for it promotes sloth and drunkenness, he feels. One has to be amused: the Ionian mode is the one that, according to Middle Age theorists, sounds exactly like our modern day C major scale! So if you've been feeling slothful lately, blame it on half the music you've been listening to!

And so he settled on just two: the Dorian and the Phrygian. The Dorian, he said, would "fittingly imitate the utterances and accents of a brave man who is engaged in warfare," while the Phrygian was suitable "for a man engaged in works of peace." (http://www.pianonoise.com/Article.Plato.htm)

Not the answer you're looking for? Browse other questions tagged political-philosophy socrates justice or ask your own question.