can anyone understand this? 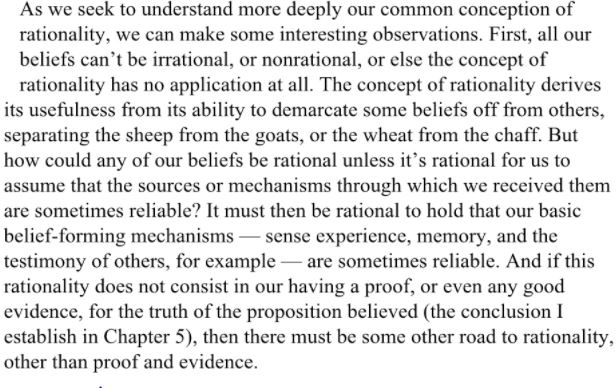 This is from Philosophy & Ethics For Dummies 2 eBook Bundle. I cannot actually understand this text fully. It seems that there's some illogical part. (Sorry if there's no such thing)

Especially 'But how ~ reliable? part is puzzling.

Roughly, the text means we have to put some faith into our sense-data. I'll translate what I take to be the best reading into plainer terms.

As we seek to understand more deeply our common conception of rationality, we can make some interesting observations.

First, our beliefs can't be irrational, or nonrational, or else the concept of rationality has no application at all.

The concept of rationality derives its usefulness from its ability to demarcate some beliefs off from others, separating the sheep from the goats, or the wheat from the chaff.

This is evidence for the previous sentence; rationality needs to be able to discriminate between good and bad beliefs.

But how could any of our beliefs be rational unless it's rational for us to assume that the sources or mechanisms through which we received them are sometimes reliable?

It must then be rational to hold that our basic belief-forming mechanisms---sense experience, memory, and the testimony of others, for example---are sometimes reliable.

Of course we do have some rational beliefs, so we have to put some trust in the mechanisms by which we acquire beliefs. But of course we also have some irrational beliefs, so we shouldn't just trust in our ability to form beliefs blindly. In fact, we can be certain that our belief-forming mechanisms are sometimes unreliable, or else we would never have wrong beliefs.

And if this rationality does not consist in our having a proof, or even any good evidence, for the truth of the proposition believed... then there must be some other road to rationality, other than proof and evidence.

This sentence is unclear and iffy. I'm not sure why the beliefs formed by the already-mentioned mechanisms wouldn't be supported by evidence. The testimony of others, our senses, and our memories all seem to me to be evidence that a belief is accurate. But I suppose we'll have to wait for Chapter 5 to really understand what the author is talking about.

4
On consistency as a univerally recognized value, and arguments using this principle
4
The Notion of Objectivity
1
Why is most modal logic about necessity vs possibility rather than permission or wishes?
3
Is the use of inconsistent definitions a logical fallacy?
1
Verum or T in dynamic epistemic logic models
4
Could we develop a notion of conceivability that would allow us to imagine impossible/inconsistent/illogical things?
3
In non-platonism, can undecidable statements have truth value?
2
Why do equivalent propositions sometimes differ in apparency?