Biden is heavier than Obama.
Fatima cannot lift Obama.
So there is no way she can lift Biden.

The argument needs a premise that defines the universe more precisely. "If Fatima cannot lift Object A, then she cannot lift anything heavier than A, regardless of any other quality the second Object might have."

Mark Andrews is in the right direction. I add some rudimentary idea from FOL(first order logic) model theory to make the answer more compelling. In a model theory, validity is defined as follows: all models that make the premises true make the conclusion true. So to show that the above argument is invalid, all you need to do is to come up with a model under which the premises are true, but the conclusion is false.

Biden is heavier than Obama.

So there is no way she can lift Biden.

Biden, Obama, Fatima, is heavier than, can lift.

If the interpretation corresponds to the ordinary usage of the words, then a model that satisfies the premises indeed does satisfy the conclusion. 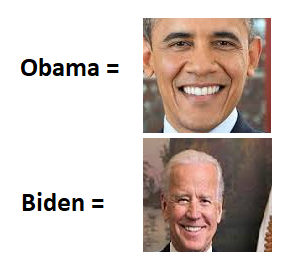 Now, let Biden and Obama be interpreted in the following way (leaving the rest of the non-logical terms intact): 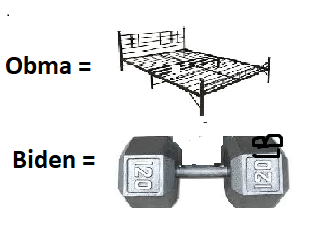 Under this interpretation, both of the premises are true: Biden (120 lb weight) is heavier than Obama (70 lb bed frame), and Fatima cannot lift Obama due to the shape of the bed frame. However, Fatima can lift Biden (the 120 lbs weight) .

Maybe it is easier for Fatima to lift heavier objects. The relation between Fatima's ability to lift an item and it's particular weight is contingent unless specified and can, therefore, vary between possible worlds. Then missing premise here is that 'If Fatima cannot lift an object, she also cannot lift an item heavier than it'. Throw that in there and you fix Fatima's 'liftability' relation between possible worlds.

There is no evidence showing that the reason Fatima cannot lift Obama is because Obama is heavy. Actually, there is no link between weight and the ability to be lifted.

To show that this is an invalid statement, let's replace the objects.

The conclusion is clearly false, as a carrier can list a fridge, while he cannot lift a motorcycle because a motorcycle is not an ergonomical object to be lifted by a man.

So, maybe Fatima can lift Biden because even though Biden is heavier than Obama, he might be more ergonomic than Obama.

So, in order to make this a valid argument, it should contain at least one more premise.

P3: Fatima cannot lift anything heavier than something she cannot lifts.

4
What is the logical form of the definition of validity?
2
If all the premises of an argument are true, is the argument logically valid?
5
In formal logic, how is it possible for an argument with a contradictory conclusion to be valid?
4
Validity stemming from contradictory premisses
1
The validity of the definition of a valid argument
6
What is the nature of "validity" in deduction when dealing with conclusions unrelated to premises?
1
Quick question on validity of arguments across propositional and predicate logic
1
Determining the validity of the arguments in the exercises of The Norton Introduction to Philosophy
1
Question Concerning Validity and Logical Arguments