What is the role of the a priori nature of time in intuitionism?

According to Brouwer, intuitionists abandoned Kant's apriority of space but adhered to the idea that time was a priori. This Intuitionism considers the "falling apart of moments of life into two qualitatively different parts, to be united only while remaining separated in time" as the fundamental phenomenon of the human intellect. I don't at all understand this. What does this mean?

Quote from Brouwer, "Intuisionism and Formalism" 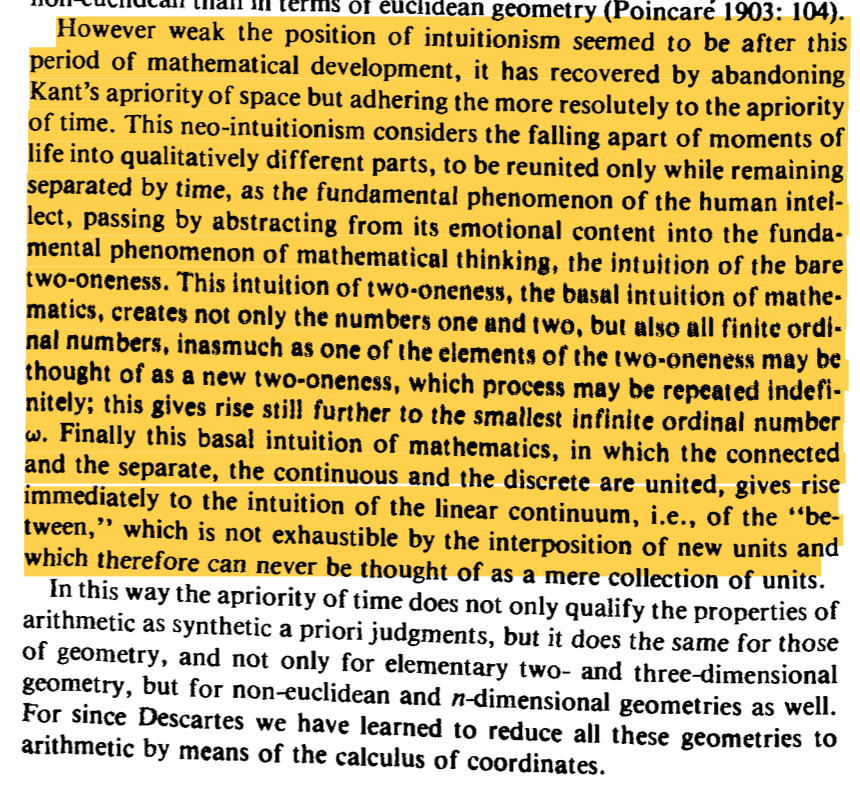 The quote describes what Brouwer calls the first act of intuitionism, the splitting off of discrete from the comprehensive intuition of which discrete and continuous are idealized poles.

Here is some quick background. The basis of Brouwer's philosophizing is the non-linguistic "primordial intuition of mathematics", of a continuum without qualitative characteristics or changes, where continuity and discreteness are fused, and where any in-between is inexhaustible. This is his fluid continuum of intuition. But even this primordial intuition is not free from idealization and abstraction, it is the abstraction from qualities that makes this continuum suitable for doing mathematics. The first act of intuitionism calls for tracing the emergence of the discrete from the fluid continuum non-discursively. Its foundation is the "two-ity", the "falling apart of moments of life into two qualitatively different parts". Here is some further commentary on this process from van Atten, van Dalen and Tieszen's Brouwer and Weyl: The phenomenology and mathematics of the intuitive continuum:

"Brouwer says that this first act separates mathematics from mathematical language and recognizes that intuitionist mathematics is a languageless activity of the mind having its origin in the perception of a move of time, i.e., of the falling apart of a life moment into two distinct things, one of which gives way to the other, but is retained by memory. This ‘two-ity’, divested of all quality, is the empty form of the common substratum of all two-ities. In this common substratum, this empty form of all two-ities, lies the basis of the discrete aspect of the primordial intuition of mathematics. It successively generates each natural number and arbitrary finite sequences. It is natural to suppose that it lies at the basis of the finite combinatorial objects that could be generated from the natural numbers.

Brouwer gives precedence to ‘two-ity’ in his account of the natural numbers. It is not good enough to merely start with a unit to obtain the natural numbers. Once we become aware of a sensation passing into another sensation, for example, we have the foundation for the abstract two-ity out of which the natural numbers are generated. Suppose we were to mark this awareness as ( | ) | to indicate the retention in memory of what was sensed earlier. This ‘two-ity’ can then be an element of a new two-ity: (( | ) | ) |, and so on... Brouwer emphasizes how in this successive, sequential structure with its ordering of ‘before’ and ‘after’ the ‘before-after’ or ‘first-second’ are held together in consciousness so that we have unity in multitude."

For more on Brouwer's and Weyl's fluid continuum see Is Aristotle's resolution of Zeno's paradoxes vindicated by motion in the intuitionistic continuum? The linked paper also gives an interpretation of Brouwer's first act in terms of Husserlian phenomenology of intentional acts and temporal retentions/protentions:

"At later (successor) stages of intuition the earlier stages sink back in time but are retained in an appropriately modified manner, indicating the importance of the role of memory in our constructions. To be more specific, as the construction begins and continues earlier parts of it sink into the past and out of our immediate awareness even though they are retained and remain active in processing present parts of the construction... The retentions are continuously modified as they sink back into the less immediate part of our present experience. Along the horizontal axis we have a multiplicity of successors but the vertical axis at each stage indicates how they are all held together or unified in one consciousness at that stage...

While the construction is in process there will also be some more or less determinate protentions (which are similar to expectations—but only roughly, see below) at any stage about how it will unfold and about its completion. In the case at hand this is completely determinate. It is clear that this will be a lawlike or rule-governed becoming. The future course of experience is fixed: it is simply the iteration of successor."

Moving from rule-governed to "lawless", free choice, construction, which creates the mathematical continuum, is the "second act of intuitionism".

One way of seeing this is to recognize that the notion of “present,” as sandwiched between past and future, is simply a useful hoax. After all, if the present is a moment in time without duration, it can’t exist.

If we take eternity to mean not infinite temporal duration but timelessness, then eternal life belongs to those who live in the present.

Both Plato and Aristotle saw in mimesis the representation of nature. Plato's distinction between eikastic and phantastic representations, seems very much on point here. For example a photograph (representation of the past) has limited capacity to convey reality (the moment), perhaps an artistically altered image may better convey the (now past) moment? Which is better? Why?

In Book II of The Republic, Plato describes Socrates' dialogue with his pupils. Socrates warns we should not seriously regard poetry as being capable of attaining the truth and that we who listen to poetry should be on our guard against its seductions, since the poet has no place in our idea of God. -- wikipedia

Not the answer you're looking for? Browse other questions tagged metaphysics philosophy-of-mathematics time intuition or ask your own question.

8
Is Aristotle's resolution of Zeno's paradoxes vindicated by motion in the intuitionistic continuum?